Since 2001 the New York Federal Reserve has compiled a manufacturing survey of the NY Empire State. It moves in step with most other Fed district surveys and provides a good measure of the industrial sector.  After rising from a near recessionary collapse in early 2016 to historic growth and optimism in 2017 and 2018, the Empire Index finally succumbed to trade war uncertainty in June. Sustained conditions near current levels will take a toll on our economy (GDP), downshifting from 3 percent to sub 2 percent growth. The strong consumer, full employment and cheap credit has buffered our economy from tipping into a contraction, but the longer the Manufacturing sector remains weak the more spillover will occur in the dominant Service sector catering to consumers. 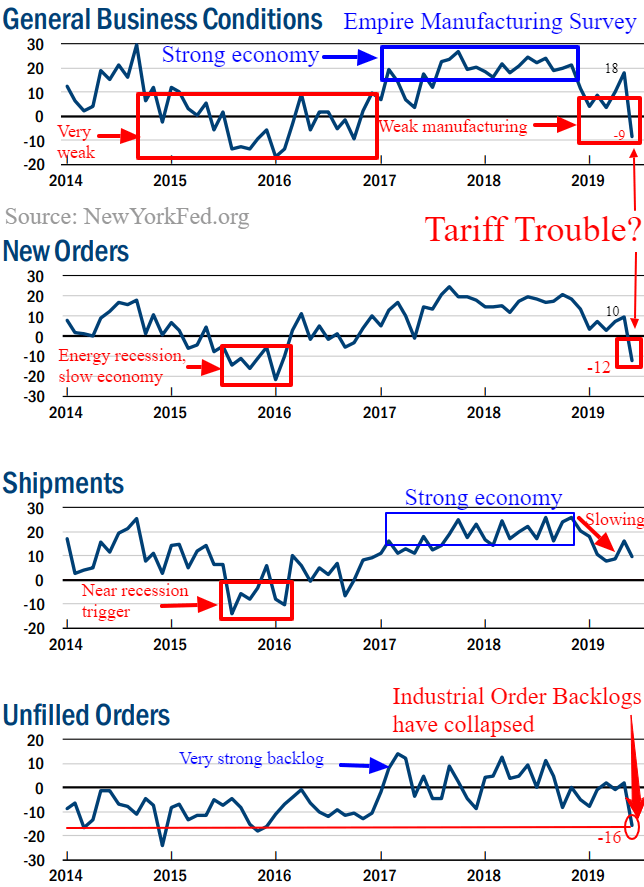 The above charts clearly correlate with the US trade war escalation and global slowing. The first two years of Trump coincided with economic acceleration and surging optimism that beat most economic forecasts. However, the surprising growth in the 1st quarter of 2019 of 3.1 percent was a fluke due to a bump in inventories and exports that is unlikely to continue the rest of 2019. Consensus economic surveys along with computer generated forecasts show 2nd quarter GDP estimates falling sharply to a growth rate below 2 percent. The sharp slow down in the Empire survey as well as all Purchasing Manager surveys, confirm that a GDP near 2 percent or lower is likely near term.

We are a consumption based economy and the financially healthy consumer has been the primary contributor to the record duration of this expansion. With full employment, record low debt service costs and strong wage growth, it’s understandable to expect further good news ahead, despite factory sluggishness. Our GDP is driven 68 percent by the consumer and we still don’t expect a recession, but the longer this trade war with China escalates, the more pain will be felt by consumers and the service economy. Current road signs favor this trade war lingering into year end which may chip away at personal consumption despite the certainty of Fed rate cuts later this month.