Since Oil prices bottomed out at $26 in early 2016 the Global economy has bounced and continued to establish solid footing with increased optimism. There is a palpable euphoria in recent months that has been absent for over a decade. Wages and input costs are rising, boosting European and US core inflation data above 1% and 2% respectively. While our US Central Bank is sprinting at this opportunity to raise interest rates in 2017, the broad economic hard data (GDP) remains historically tepid and commodity prices have actually deflated modestly over the past 4 months.  Until Oil, Copper and the general commodity index reach new recovery highs, there will be no inflation worries beyond the monetary machinations of our Federal Reserve Bank.

By far the most important canary in the inflation coal mine is Oil. This fossil fuel often leads the global economy and comprises the largest part of most commodity indices. As long as Oil is contained in the mid $40’s to upper $50’s the global economy and inflation will be in the Goldilocks environment of not too cold and not too hot. US Shale output in the Permian Basin has roared to new heights bringing total US production to 14 month highs, up 700,000 barrels/day over the last 7 months. Inventories continue to hit all time records as well at 535 million barrels (mb). 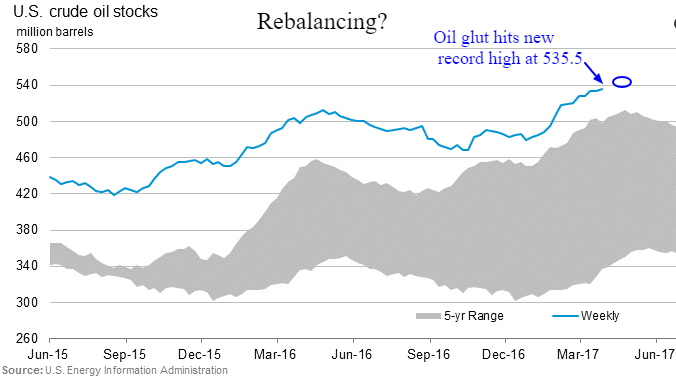 The chart below indicates an optimism and long hedging trend that has soared to record levels by Money Managers and Hedge Funds. While most forecasters are certain prices will hit $60+ this year, such a heavy net long position by Funds increase the odds of sideways to lower prices. This means that much of the large Fund buying power has been used up expecting higher Oil prices and it will take a constant barrage of Bullish news to keep prices up. Prices can still move to new highs, but a higher confidence entry would require a bit more Managed Money liquidation as shown below before we could get excited about investing in the raw commodity. The Bull camp has the jawboning of Saudi led OPEC claiming to maintain supply restrictions along with positive seasonality through May, while the Bears have rising US production in the midst of slowing consumption forecasts. The scary omen would be the liquidation of Managed Money net long positions that would be needed to achieve an oversold condition. Our Buy zone shown below normally correlates with a $15 to $30 drop in Oil prices that would imply concerns about a recession. For now we will be cheer-leading the Saudi price support plan to hold prices in the $40’s and $50’s until this inventory glut can begin a more secular reduction. 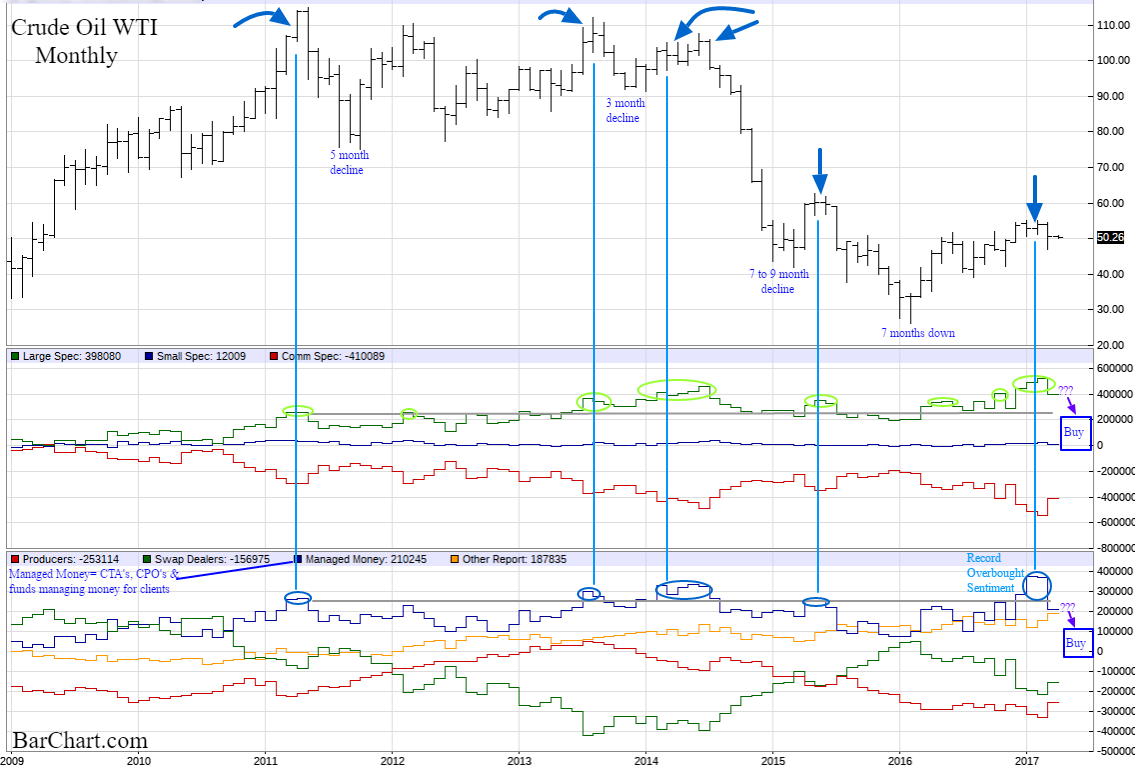 US Shale from the little Permian basin is currently the global swing producer and investment capital furthering supply will continue to climb. The success of the Saudi effort to elevate Oil prices would be a major win for the “US” and we should be appreciative of their scheme which cedes market share to North America and non-OPEC nations. Since free market oriented non-OPEC producers like the US and Canada can endure far more price pain than OPEC, we have a potential Goldilocks scenario where OPEC can’t allow prices below the mid-40’s, unless they are willing to “flood” the markets with Oil more than before, driving prices under $20 until all new drilling activity has ground to a halt. This would cause the global economy to slow and eventually transfer even more market share to others. If OPEC miraculously pushes Oil towards $70 then vast areas of shuttered Shale production will open up in lands currently too costly to drill. This would be great news for the world economy and the US specifically who would quickly usurp market share from OPEC and boost economic growth without rapid inflation.  Heads or Tails the US increases market share medium term. Already over 400 Oil rigs have been added in the US over the past year. For now Oil continues to be a decent leading economic indicator. At $10 above or below current prices, it would indicate a new leg up in the economy or a tilt toward recession, respectively. 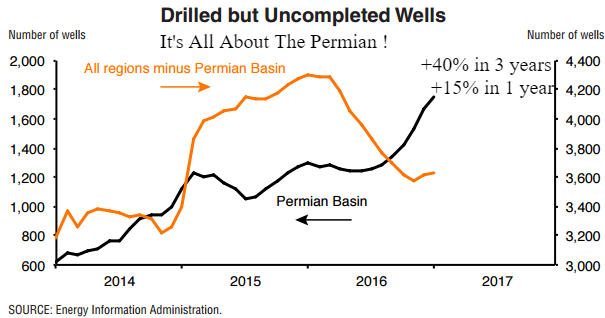 Throughout 2017 there has been almost 100% consensus that the Federal Funds Rate and rates of all maturities would move higher in 2017. Record short positioning by money managers for all maturities of Bond yields have been tethered to rising interest rate bets in 2017. Ironically rates topped out in December and have fallen sharply over the past 5 weeks as doubts have grown about the delays in Trump’s pro business agenda.

The extreme level of Net Short Futures Hedging positions below (green line) are another example of the oversold bond condition over higher rate expectations. We favor one more leg up in Bond prices (lower in yield) which will then provide a strong entry for the move to higher rates that so many had expected earlier. However, any move to new lows in bond prices (higher yields) at this juncture would imply the economy had already moved into a faster gear and that yields were about to break out to multi-year highs. The update this week is that prices just broke above 126 (below 2.25% yield) and appear headed to the 127 -128 zone with plenty of capacity for Hedge Funds to continue liquidating their erroneous net short positions. The tensions in North Korea are also adding to the economic woes and flight to safety trade that tend to push Bond prices higher (yields lower).

The professional consensus continues to forecast a copper deficit in 2017 which has spurred record long hedging. We often portray the most extreme Bullish or Bearish fund positioning of professional money managers as a contrary indication. All time record net long bets in Copper by Managed Money and Large Spec funds since last November have marked a ‘copper top’ thus far.  Initially prices of the red metal  spiked on massive strikes and Governmental roadblocks in a rising demand environment. Now that most strikes are settled, prices have fallen back under $2.60 a pound, near major support. The important support to watch is in the $2.40’s basis July Copper.  Should the lower $2.40’s support break, then major Hedge Fund liquidation could create panic selling. New highs in Copper are needed for the global economic recovery to realize better growth. 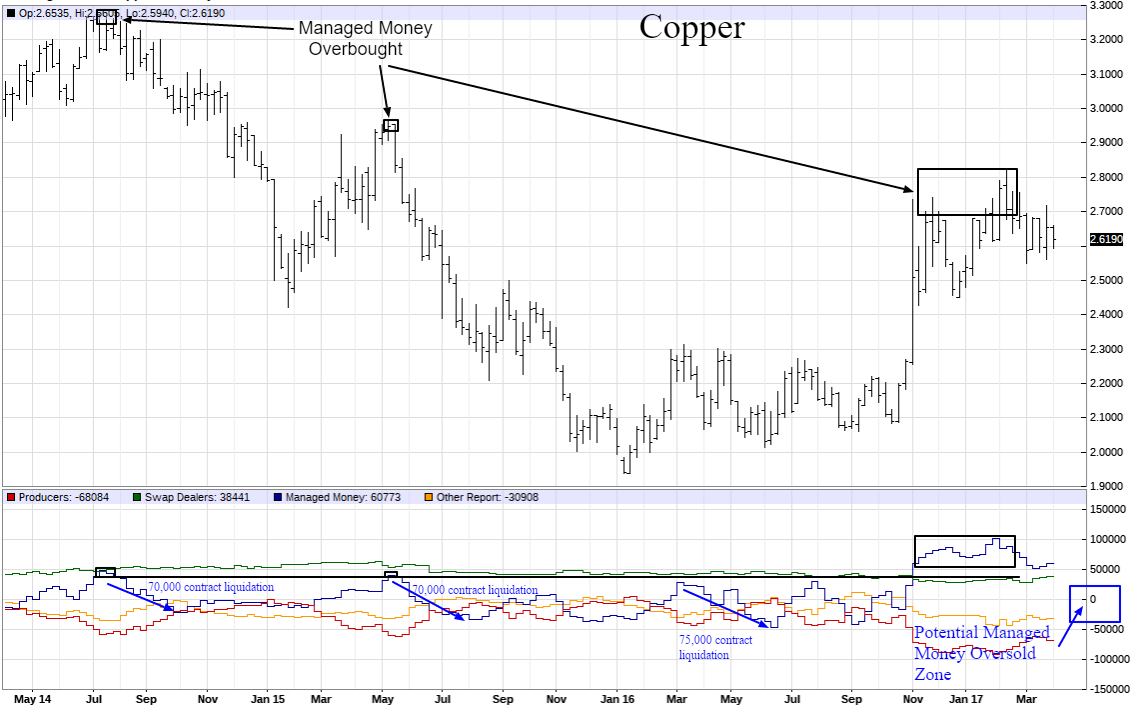 Gold is testing the $1290’s on the North Korea news and can easily swing over $100 from here either way depending upon the level of anxiety. A Nuclear event is beyond comprehension for most humans and perhaps a taboo topic, but Gold and Treasuries and little else would be among the few havens of relative financial safety if the unthinkable occurs. Otherwise, Gold has built in an above normal premium and appears neutral on the fundamentals. Geopolitical events in Asia and the Middle East remain the primary support factors since the overbought fund buying of 2016 has become neutral in recent months.

The Brexit (British exit from European economic rules) has begun and today Prime Minister Theresa May has announced surprise early elections while her poll numbers are favorable to garner increased negotiating power. The extreme net short positions on the Pound by Hedge Funds have caused us to take make contrary forecasts of Bullishness last August and October of 2016 and now in March 2017. Prices have just rocketed up to 129 today on the election announcement, above key resistance. While the appreciation of the Pound currency may stall here short term, we expect prices to continue higher to the 133 to 136 zone. Goldman Sachs made a good call for 120 when Brexit was announced last year, but like so many economists, their reasons were completely wrong. Most assumed an isolated British recession was imminent causing currency depreciation, when in fact their economy has been resilient. Now UK growth prospects are being revised higher and the massive downside bet by money managers allows for continued currency appreciation above the 6 month base of 120 to 126. 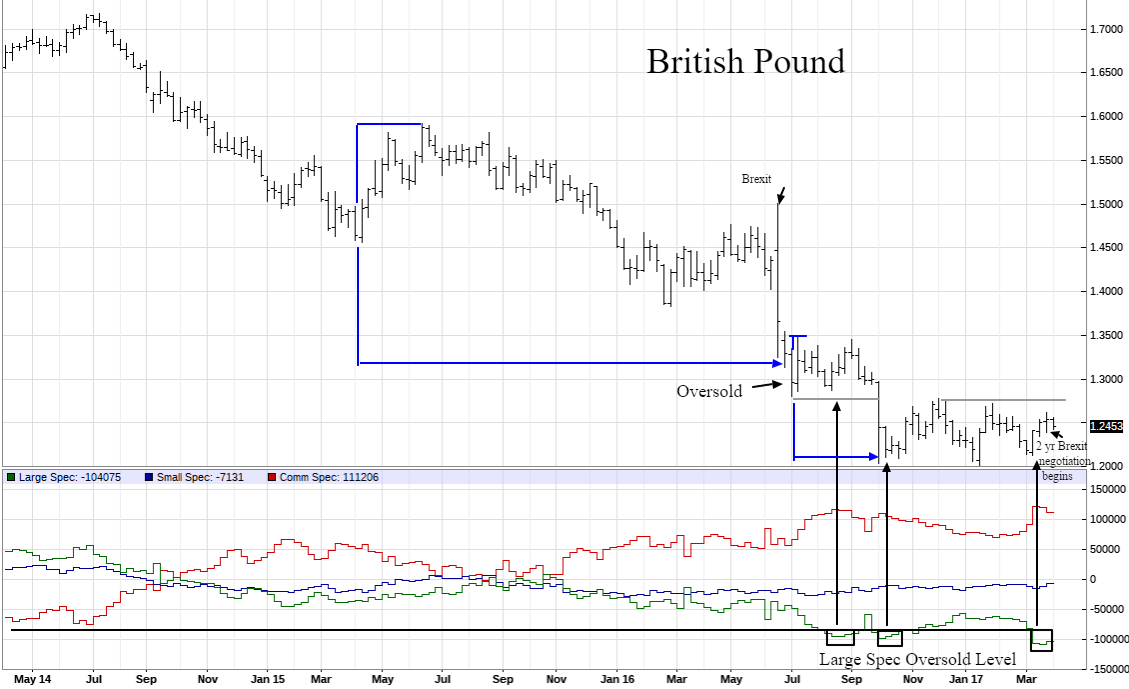 Supply gluts have plagued Corn, Wheat and Soybeans for the past year.  Yet Managed Money Funds have been extremely optimistic on the Bean complex as of February, signaling potential overbought conditions. As of this week, Funds have finally liquidated long bets down to 13 month lows at mildly oversold levels. $9.30’s down to our maximum targets of $8 to $8.50 a bushel should contain the selling through planting season. Net shorts of minus 100,000 contracts or more by Money Managers should offer good price zones to buy. 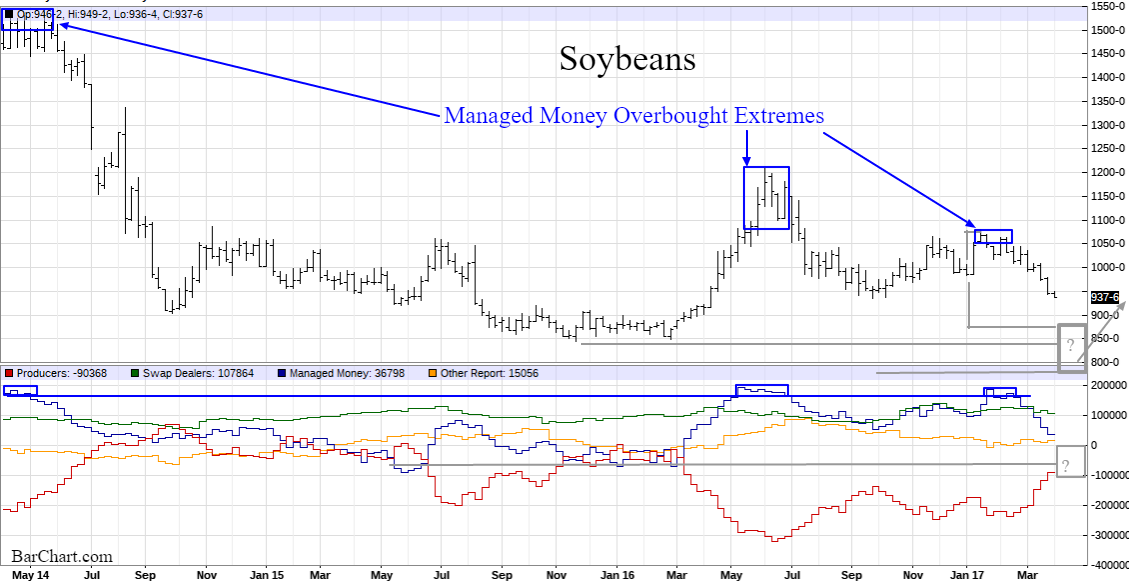 We were very Bullish on Chicago Wheat last year under $4.00. It was disappointing to see our expected big rally falter near just $4.50 and then have prices meander lower on the well known oversupply concerns that we presumed were priced in. It was also a surprising divergence when Kansas Wheat (2nd chart) moved to a Sell while we held on to the long Chicago Wheat. This negative divergence was a flag that prices were not ready to surge above their basing pattern. Despite the modest price dip on this weekly chart, Money Managers have moved back to extreme oversold net short positions that encourage us to again begin longer term Buying in futures and stock ETF’s of WEAT in the 6.50 to 6.85 zone. 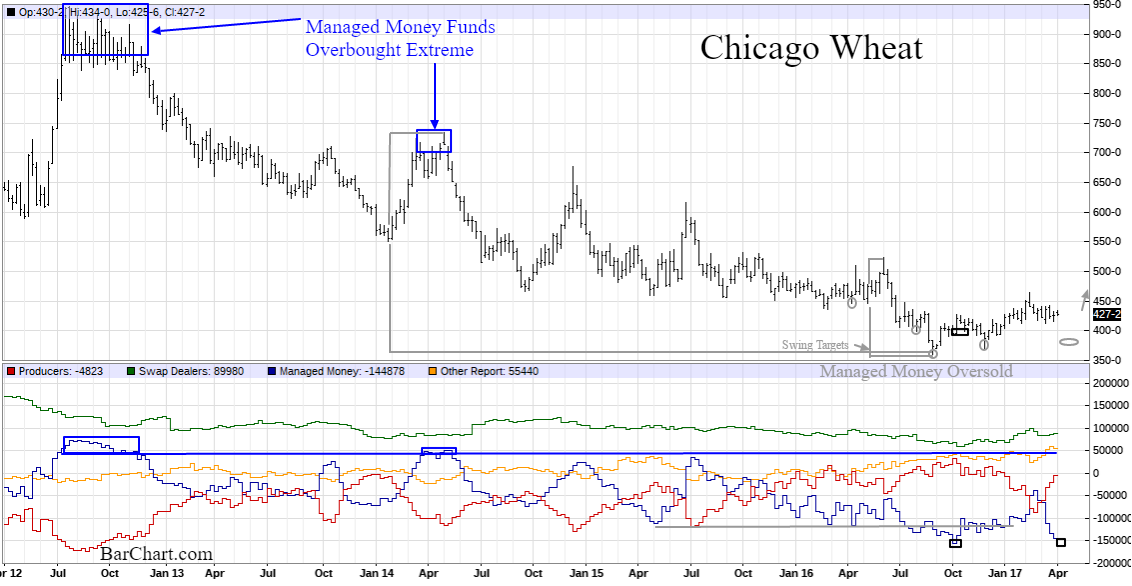 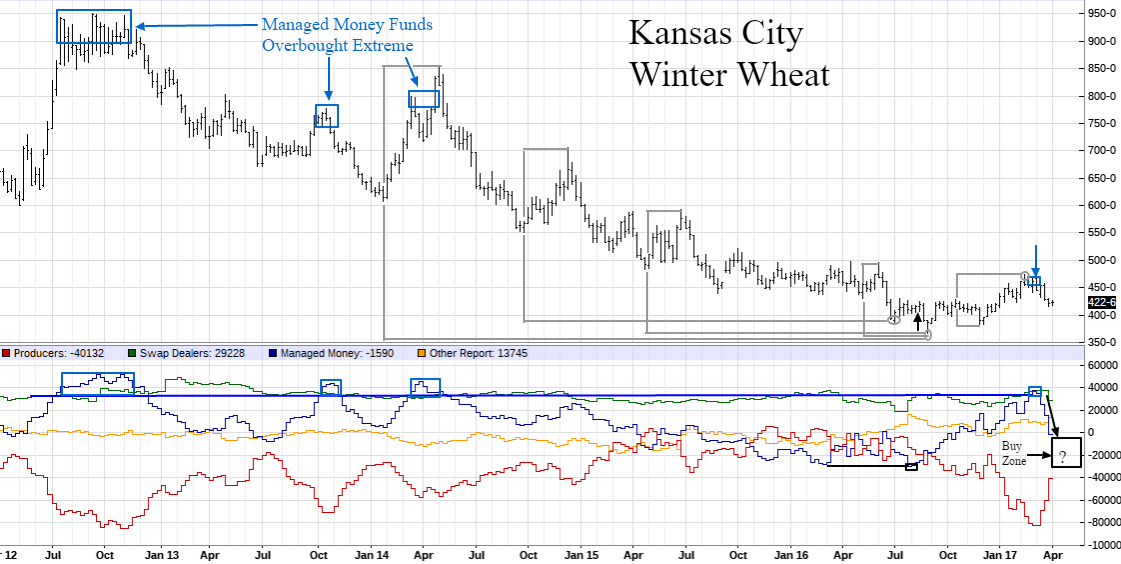 While the weekly chart doesn’t show all the relative weakness in Corn for March and April, prices have moved back to their November lows and Money Managers are once again back to extreme oversold levels seen last September. Once July Corn can move above $3.80 and $3.94 resistance the uptrend will be more cemented. Maximum downside risk currently appears to be in the $3.40’s a bushel basis the July contract. 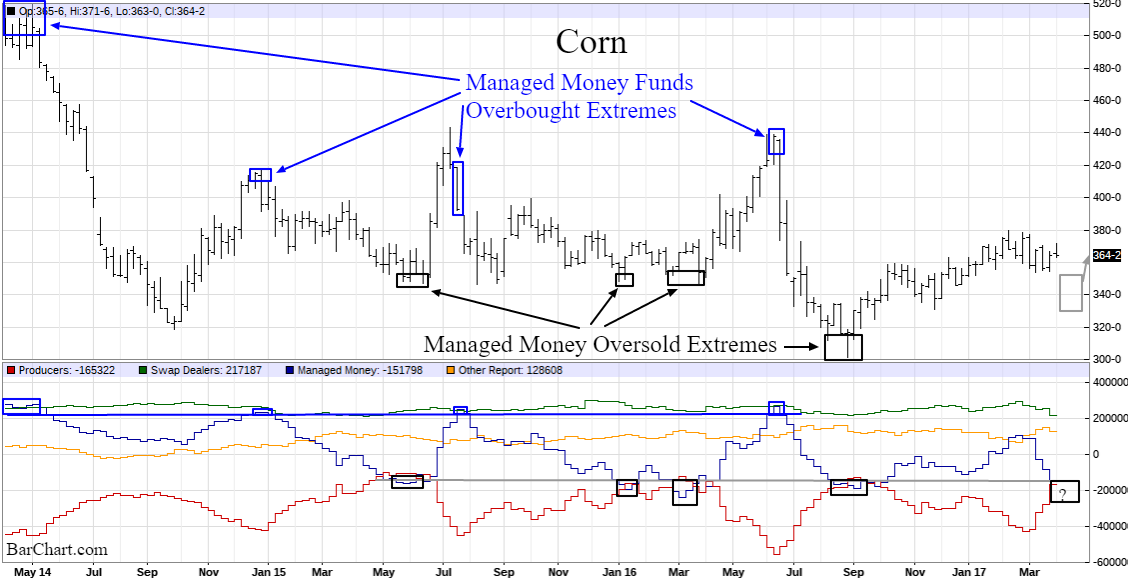 One year ago Sugar shortages were becoming well known and Managed Money funds added over 255,000 futures contracts over 7 months sending Sugar higher by 70% in price. Today the global Sugar market is well supplied with Managed funds have liquidated over 220,000 contracts over the past 6 months. While prices may bounce here, we would not consider long side investments until until Money Managers turned net short and prices moved into the 14 to 15 area of support. 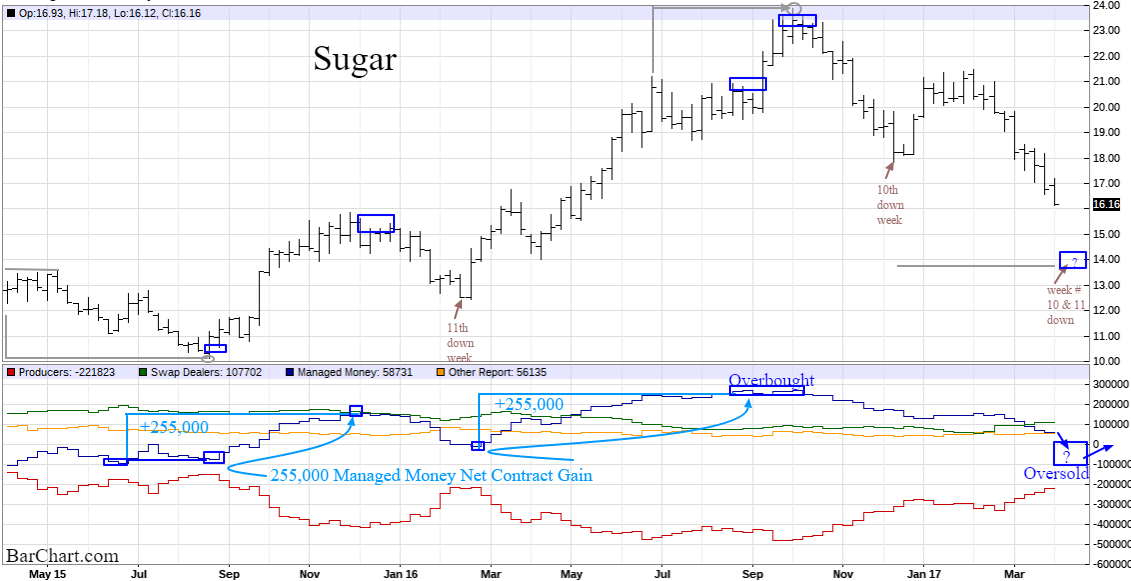 Cotton supplies have been tight in 2017 and Money Managers added a net 120,000 contracts to their holdings over the past year to all time record levels of Bullishness. This doesn’t mean Cotton must collapse, but indicates prices are vulnerable with much of the the sideline money already invested. Bad weather and Chinese restocking can send prices soaring again, but beware of corrections under 76 (75.35 basis July) which may cause fund liquidation to kick in. Currently the 79 to 80 zone with tight stops is the lower risk zone for July contract shorts. 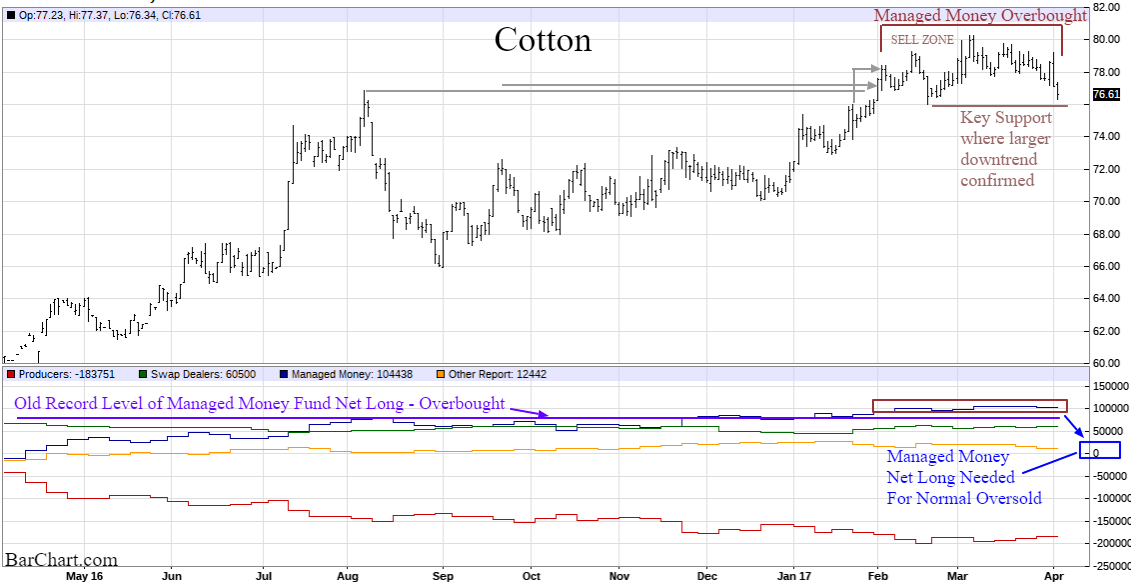 Fundamentally there are ample supplies of Cocoa, but the rally in Sterling along with extreme oversold Managed Money funds favors a low in Cocoa soon. A strong close beneath July contract lows of 1879 and 10 year lows of 1869 opens up potential to the mid 1600’s. We favor the mid 1800’s holding as support, but a move above the March high is needed technically to confirm a stronger bottom is in place 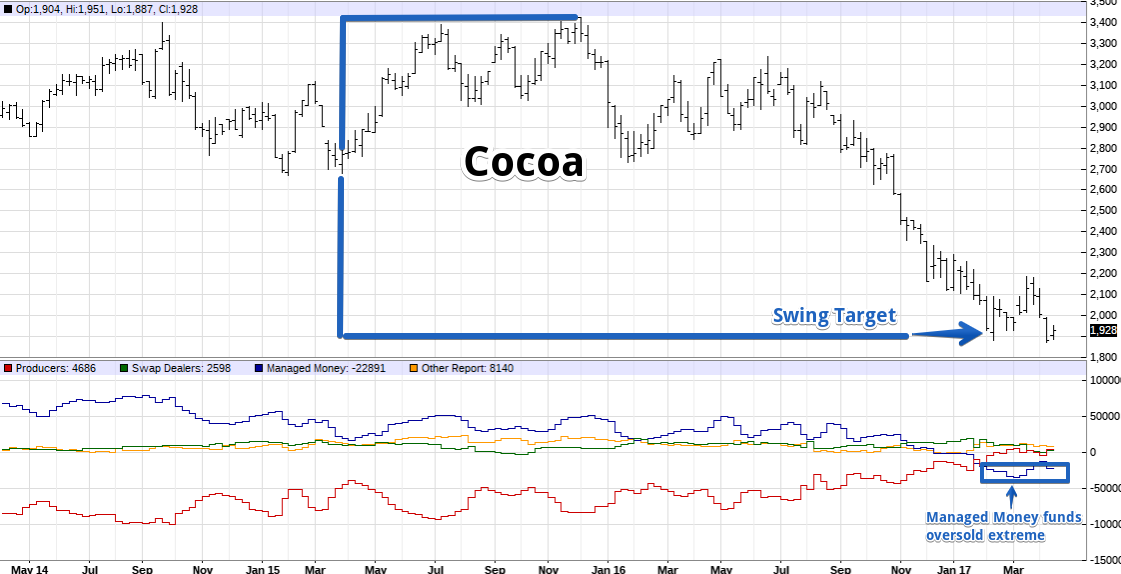 The food commodities continue to be in Bear markets or long term basing patterns, while the stronger metals and energy complexes have been congesting at higher levels. If this global recovery that began last year is going to continue we will need a breakout above the 1st quarter peak in the overall commodity index (DBC) to confirm the revival of animal spirits and better economic growth.