Fed Rate Cuts Based on Perception Not Reality

The 106 year old Federal Reserve Bank of the US controls monetary policy to influence economic conditions, primarily by moving short term bank borrowing rates and bank reserves. Surveys predict 100% confidence in a Federal Reserve Rate cut on September 18th and high odds of another cut before year end. Stock and bond yields are rebounding sharply the past 2 weeks on the combination of accelerating economic (GDP) growth and very positive rhetoric out of China and the US on reducing trade barriers. The irony is that improving current economic conditions and an expected rate cut next week implies the Fed cares more about market expectations than the economic reality. The economy is slowing, but still growing at 2% with low inflation, low interest rates and full employment. Our metrics are the envy of world. Normally these conditions would not compel a Central Bank to push for even lower interest rates.

For the past four decades the Fed has been tasked with maximizing employment, keeping prices stable and interest rates moderate. As the chart above illustrates, inflation is not a problem, while the chart below shows a strong labor market near full employment. We continue to witness record Job Openings, a record shortage of workers being hired relative to demand, record level of employees willing to quit their job for a better pay.  Wages are growing at a very rapid 3.2% over the past year and over 4% for the past 3 months. Naturally consumer confidence and credit demand remain high, spurring the 70% of the economy dominated by the consumer. Retail sales are healthy and same store sales are on fire at over 6% growth. The small manufacturing sector has stalled, but non-manufacturing is quite strong and may eventually force the industrial economy to increase production as inventories dwindle on trade war fears.

While there are fewer workers available to sustain high levels of job growth, the recent low hiring levels reported are countered by the Household jobs survey that showed 590,000 jobs added in August. With almost 2 million jobs added in the past few months, it appears that many people that were not seeking vocations have decided to join the workforce. The worker shortage persists, but job growth appears to be robust, unlike past end of cycle expansions that rolled over before the onset of recession. 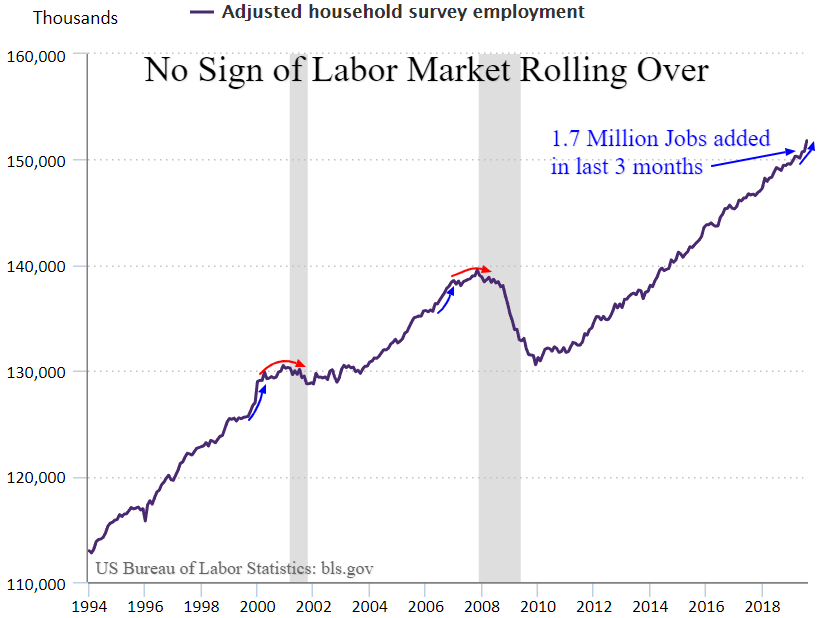 It’s well known that the unemployment rate is near record lows, but even low skilled workers are finding jobs easier than ever as employers still list the inability to find labor as their primary impediment. Higher education is still the best path for securing a quality job, but the low skilled labor shortage today hints that the less educated need a push toward trade schools and training centers more than ever. Yet, training centers and trade schools struggle to expand their student population as the need for jobs has fallen to record lows. While impossible due to transitional unemployment, if every unemployed worker had a job today, there would still be a labor shortfall of over one million. 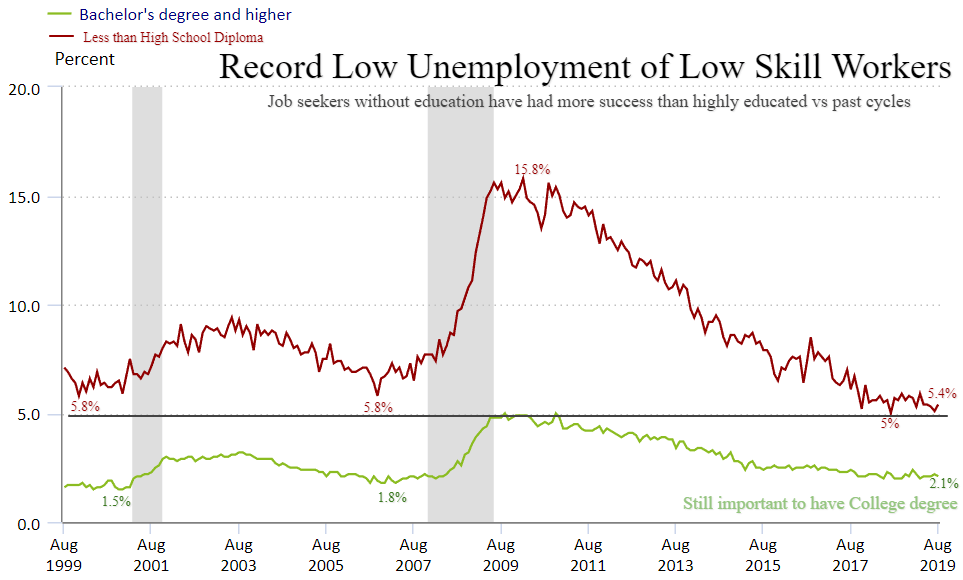 A GDP growth closer to 3% may be ideal, however the continuing strong employment and consumption portion of the economy with low inflation and borrowing costs indicate a Fed that has fulfilled its Central Bank mandates. Clearly the perception of investors is the deciding factor in the Federal Reserve monetary policy as everyone expects the demur Fed to cut the Fed Funds rate next week. We suspect stock investors will be happy that a rate cut will meet their demands, yet there are high odds of market disappointment with potential Hawkish guidance that future rate cuts may not be needed. This should cause stocks to correct next week before stabilizing to focus on the Bullish prospects of expected October progress on the US and China trade talks. This record 10 year economic expansion in the US is far from typical and has led many to prematurely anticipate Recessions. At ExecSpec we continually push back on forecasts for GDP contractions that arise almost annually and urge investors to view this period as our 3rd non-recessionary cycle slowdown since 2009. It’s possible that our conditions mirror 2016 more than than the 2007 peak and that 2020 and 2021 will be a period of improving economic conditions.

In Search of Recession