Fed is Only 2% From Inflation Goal

Every day we hear that inflation has a long way to go to reach the Fed’s 2% target from the current 8.5%. Of course, this is hyperbole since the Fed does not target headline CPI inflation rates. Pundits use the popular consumer price indices (CPI) that include volatile food and energy as compared to the Fed’s broader measure of personal consumption expenditures (PCE), excluding food and energy. The CPI peaked at 9% in June, while the Fed’s preferred core PCE topped at a more tepid sounding 5.3% back in February. Chopping inflation down from 9% sounds vastly different than knocking the Fed’s inflation measure to 2 to 3% from today’s 4.7% rate. Yet, inflation and weak leaders in our Capitol remain the top concern among voters, according to Gallup. The negative news tailwind has been justified with more than a 100% rise in gasoline, 50% higher airfares, 40% jump in used car prices and a 30% hike in egg prices. The Fed must keep the pressure on interest rate hikes until the consumer stops spending and the Government stops adding new stimulus bills. However, bringing today’s PCE inflation rate down from 4.7% to under 3% sounds a lot better than the deceptive claim that inflation needs to fall from 9% to 2%.

In the next chart it’s easy to see where much of the inflation came from. Not only were record trillions in fiscal stimulus bills added at the outset of Covid, but this time the Fed added triple the level of pretend money to the financial system compared to the 2008 mortgage crisis. During The Great Recession, monetary authorities grew the M2 money supply by about 10%. This time they allowed it to surge 27%. These actions spawned consumption levels of $1 to $1.5 trillion above normal, naturally triggering alarming inflation. However, money supply is now slowing, and the Fed is tightening credit, triggering lower commodity prices, a 22 year low in mortgage demand and normalizing used car prices. A year from now, a slower economy and removal of peak month over month inflation data from the trailing 12-month average, could bring the Fed’s inflation rate into the 2.5 to 3% range.

Commodity prices will not fall back to pre-covid levels without a severe recession, but we expect inflation to continue eroding consumption into next summer to more acceptable levels for consumers. As commodities lead consumer inflation lower, sentiment will finally become more positive in the 2nd half of next year. 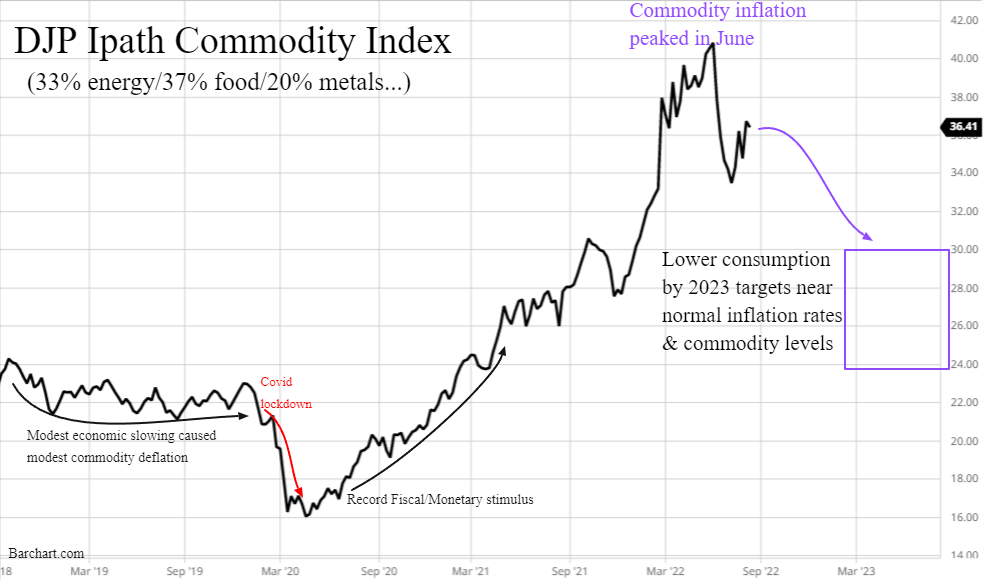 The summer stock market rally we forecasted into August, possibly mid-September, is now triggering some excessive investor optimism about Fed rate hikes ending soon. We are still months away from any hint of a dovish Fed pivot, so stock traders should beware as we shift soon to negative seasonality into October after reaching our ideal SP 500 Index targets near 4300.