During the depths of the 2008-2009 Great Recession, the Fed began a 6 year money creation scheme expanding bank balance sheets by $3.5 Trillion dollars without a post recovery inflation as many feared. This digital explosion of our money supply is now being surpassed during the age of Corona with another $2.4 Trillion in just 8 weeks. Central Banks have relied upon imagineering of currency out of thin air at ever increasing rates during Recessions ever since the US left the Gold Standard in the 1970’s. When we closed the Gold Window at Fort Knox in 1971 and moved to a floating fiat currency system there was an inflationary adjustment decade to reprice our currency relative to our trading partners. After Fed Chair Volker tamed inflation in the 1980’s, our Central Bank has increasingly focused its tools upon countering disinflation. These tools relied primarily upon a term Japan coined in 2001 called Quantitative Easing (QE). The now ubiquitous QE process was essentially a Government arrangement with their quasi independent Central banks to buy Government bonds (debt), expanding free bank reserves for economic stimulation. With no perceived negative consequences, this QE era of printing unlimited Trillions has grown to include pretend money purchases of both public and private debt and even publicly traded stock, in the case of Japan. The Fed and Central Banks around the world tried their best to create inflation over the past 11 years, yet no matter how much debt and currency was created to stimulate the animal spirits, the underlying price impulse toward deflation continued. In response to the current Coronavirus pandemic and Government induced mini-Depression, the Fed has brought interest rates close to zero and announced an unlimited supply of money (QE infinity) to buy troubled assets and prevent the private sector from acting prudently by derisking. The $2.4 Trillion that the Fed has thrown into the banking system over the past 2 months should continue to grow at close to $200 Billion per week pace until there are signs the economy has reversed its contraction of jobs and income. Unfortunately, no amount of helicopter money from our fiscal and monetary overlords can move the economy towards its historic growth trajectory until Government mandated fear from the COVID-19 pandemic is quelled.

With Fed assets at $6.6 Trillion, heading to $8 or $9 Trillion this year and several Trillion in Fiscal stimulus in the pipeline, will there be inflation concerns when the economy recovers? Doubtful! After a record 11 straight years of economic (GDP) expansion that included three rounds of QE and a $10 Trillion jump in the money supply (MZM), we never had a hint of inflation heating up. Expansionary fiscal and monetary policy in the US and around the Globe have been no match for the secular deflationary wave of aging demographics, entitlement burdens and excess capacity. The ever massive amount of debt we create each Recession borrows inflation from our future to spend in the present. The demographic overhang of a shrinking ratio of workers to seniors in 1st and 2nd world countries began in 1980 and has accelerated this past decade as Boomers retire more rapidly.

Perhaps the father of modern monetary theory, Milton Friedman, would agree that it’s not just the money supply or the relative amount of dollars in circulation that matters, but the velocity of money that is critical. Currently money supply velocity multiplier, the number of times a unit of currency is used during a specific period, is contracting almost as fast as the stock of money is being added.

A more simple measure of inflationary pressure can be assessed by major trends in the US Dollar. The Dollar logically moves inversely to inflation since most global commodities are priced in Dollars. Should the Dollar fall sharply (>50%) we suspect US consumer inflation would rise sharply for the first time since the early 1980’s. However, in times of trouble (pandemic) capital flows to the US and supports our Dollar. Despite the efforts of China and Russia, the US remains the bastion of safety or at least the cleanest shirt in the global laundry of fiat money. 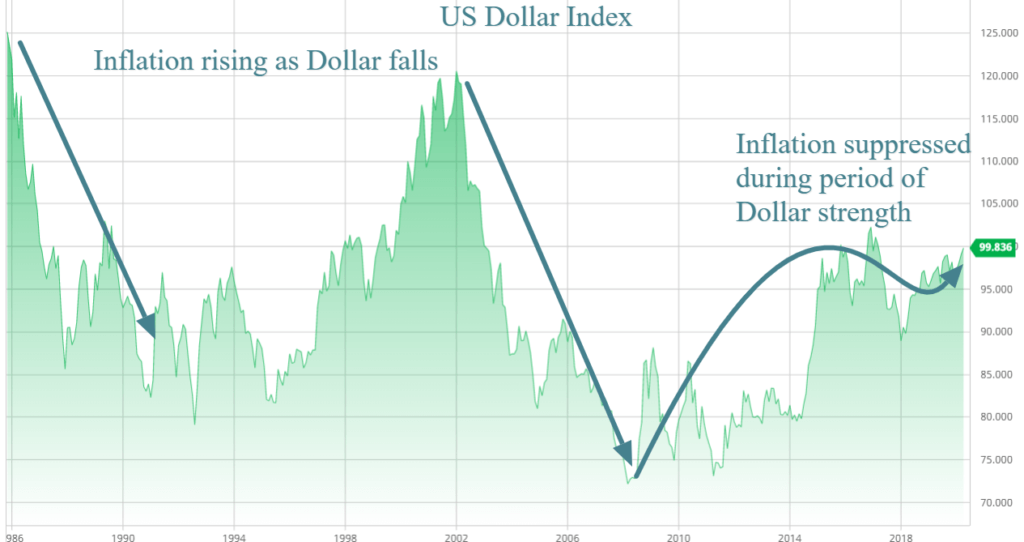 The Feds preferred metric for gauging inflation is the core personal consumption expenditures index or PCE (left scale, red line below). While PCE inflation has failed to hold the Fed’s 2%+ target, it’s almost impossible for inflation to rise as long as the Dollar remains stronger relative to other currencies. With the major currency pairs of Japan and Europe in worse shape than the US and the Dollar denomination of most commodities globally, there are few factors on the horizon that would push the Dollar significantly lower.

After a long period of subdued but stable prices, raw commodities have fallen hard this year deflating over 25%. The global pandemic and forced economic contraction elevated US Dollar strength and crushed prices of most commodities and assets. When this economic cycle begins to recover the US Dollar will weaken. Once a strong recovery growth trend is established, we would expect the Dollar to fall (15 to 25%) triggering a temporary phase of moderately higher than normal inflation in consumer prices (PCE). This is the pattern that occurred from early 2009 to early 2011 when our Dollar fell and raw commodities soared. Assuming we adapt to COVID-19 and virtually eliminate much of the fear factor suppressing current activity, then the Euro and metals will rise as the Dollar falls.

Assuming we exit the current COVID contraction later this year, we will be watching to see if the US Dollar devalues vs other currencies as a sign of accelerating commodity inflation. Based upon the 40 year trend since inflation peaked in 1980, we would not be concerned about consumer prices. Currently, World Governments and their Central banks are the only game in town. However, since all currencies are backed only by the faith in the credit of Government, we should remain wary that unlimited money printing to rescue defaulting debt bubbles could someday trigger a loss of fiat currency confidence and a liquidity trap of hoarding assets. For now, until COVID fears subside, we should expect unlimited QE and fiscal stimulus will continue and interest rates will remain lower for longer.