US Leads World in Natural Gas Production and CO2 Reduction

While the world awaits the day when the rapid growth of solar and wind supplant coal and oil, the quickest bridge to the alleged Utopian dream of clean air is Natural Gas. Europe may lead the world in Global Warming Alarmism, but the US is actually making the biggest dent in this effort without even trying. The US  leads the world in Natural Gas production, which is 25 percent cleaner than oil and 50 percent cleaner than coal. Meanwhile our critical European allies rely upon the nuclear dictatorship to the East for their unclean energy security instead of shifting their supply chain to the US. More US Natural Gas means cheaper energy, cleaner air and a weaker Russia. Major energy polluting culprits in India, China and Europe would be wise to increase their conversion to a cleaner hydrocarbon such as Natural Gas while alternative energies come on line over the next few decades. 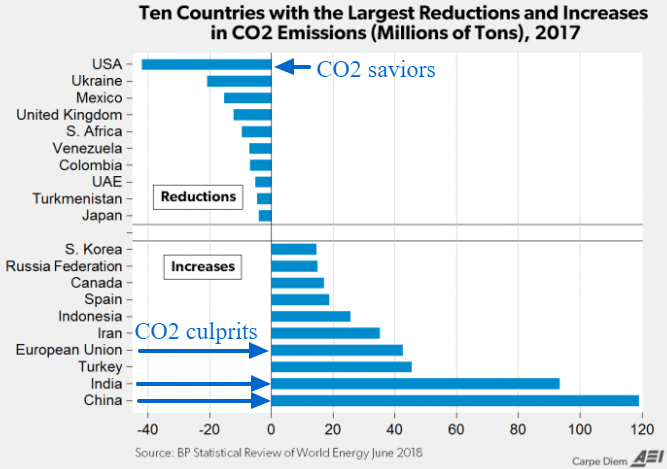 Politicians may take credit for the curtailment of US Oil consumption and virtual collapse of Coal demand, when in fact good old free enterprise deserves a commendation as the megawatt cost for Utilities is 27 percent cheaper using gas over coal.  Trump reduced regulatory costs on coal mining, but cleaner and cheaper Natural Gas will keep the carbon heavy rock in steep decline for years to come. 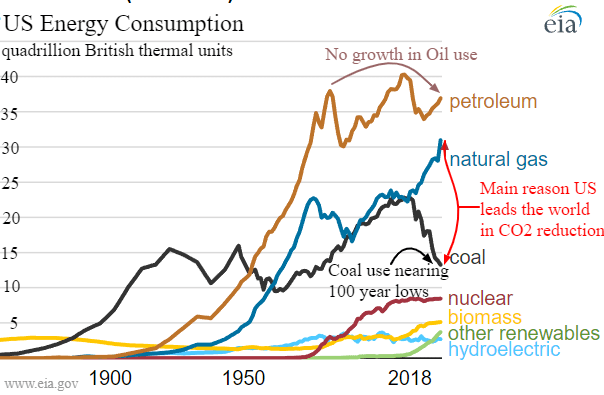 The US conversion to Natural Gas began almost 20 years ago when our country sharply ramped up imports. As the US fracking boom accelerated over the past decade, our gas imports fell back to earth and our excess production launched a new export industry for the US. When production costs fell sharply during the energy recession of 2015 and 2016 there was a parabolic rise in gas production and exports as we sought customers for our growing energy surplus. In fact, despite the parabolic rise in Natural Gas consumption in the US, we are slated to become the worlds leader in flaring of this cleaner fuel. Flaring is the burning off of excess Natural Gas beyond our retention capacity when pumping Crude Oil. Pipelines and Liquefied Natural Gas (LNG) export hubs are being built rapidly, yet the enormous flaring destruction of this excess energy source speaks to the massive energy potential the US is building that will keep replacing more costly and CO2 heavy consumption around the globe. 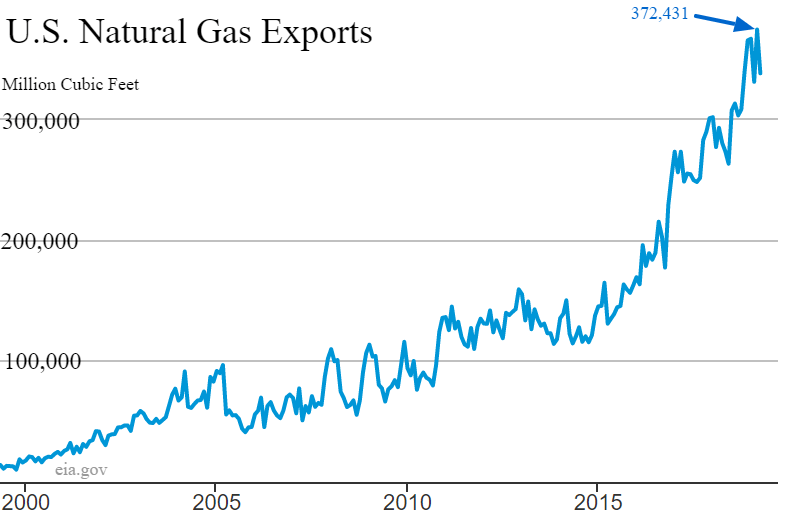 The US has moved from virtually no LNG exports to the worlds 3rd largest exporter with a projected number one status in 2025. Most of our exports are shipped to Mexico, S.Korea, Japan and China and negligible exports to Europe. While decarbonization efforts will spur a steady growth of Natural Gas demand for at least the next decade, the US has potential to gain significant market share in Europe where gas prices are almost triple those in the US. With Europe’s precarious reliance on the good will of a Russian for their energy survival, it seems prudent for energy security and cost for our allies to shift their supply chains toward our growing fleet of  LNG tankers.  For the next few years the Natural Gas production capacity will keep prices lower for longer as infrastructure expansion lags far behind supply and demand. Until our gas pipelines and LNG ports are more fully developed over the next few years, it’s challenging for Natural Gas to sustain Bull market runs. Medium term risk into early September is in the $1.80’s if the escalating Iranian tensions ease. The price fundamentals remain Bearish, but any military strike inside Iran should send Nat Gas back above $3 temporarily.