Once every four years investors contemplate the inflection point of electing a new President and its economic and personal portfolio impact. Most of the 58 Presidential elections since our country’s founding have been better than pessimists had feared, but inevitable political campaigning works overtime to convince us the end is nigh if the other party is elected. Once again in 2020 we hear the outcry from both sides of the isle that to elect either Biden or Trump will ruin the country. Even when extreme policies are feared, we usually have a divided Congress that keeps the guardrails on destructive ruminations. The contrast some fear in the 2020 election has never been more stark, according to detractors. This election so far may be unusual in celebrating radical change: size of Supreme Court, changing the electoral college, gun ownership…  Perhaps the most impactful proposal in this election season is a call to eliminate the filibuster. This Senate Rule, adopted by mistake in 1837, evolved into a super majority of 66% of the Senate to pass legislation. One party simple majority control over both Houses of Congress and the White House could eliminate the filibuster guardrail and escalate economic uncertainty and social unrest. For this reason, the Senate race may be more pivotal than the Presidency to the economy and the stock market.

Looking at the current Presidential race as compared to 2016 provides an interesting perspective using an average of all major pollsters. As in 2016, Trump is consistently well behind in both the national polls as well as the far more important battleground swing state surveys. However, given that Trump ran the table in swing states in 2016, it’s notable that he’s currently performing the same or better today than at this point 4 years ago in these areas (PA, MI, WI, FL, AZ & NC). In 2016, Trump’s poll numbers improved sharply in August and September, so the current Trump gain shown below requires a continued narrowing of the Biden advantage before election day or else Trump would most likely lose. It’s also important to highlight that polling data of Trump and Obama favorability at this point in their first terms is surprisingly similar. For now, we would assume this will again be a close race for the White House. If Biden wins, the Senate will become very important and it’s currently showing an even tighter race than the Presidency. 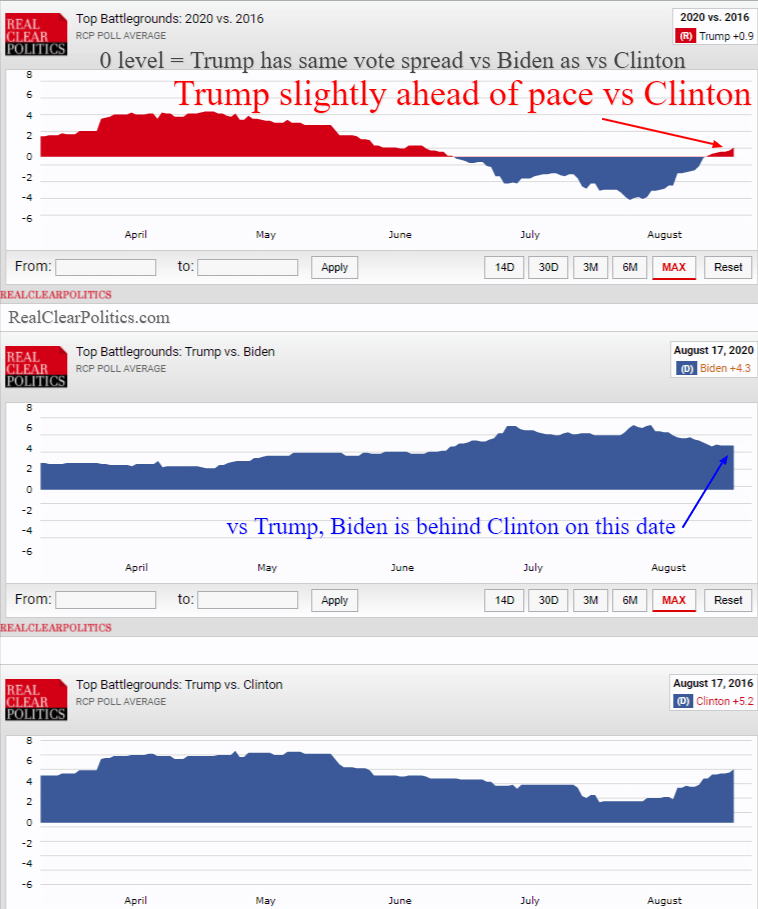 How will a Biden victory affect stocks? If the GOP holds the current Senate majority, then the odds are for an initial spike in investor fear of Biden, followed by a more benign overall affect upon stocks as radical policy inclinations can’t overcome Senate filibusters. Stocks would begin moving higher in Q1 2021 in this scenario, assuming a mass vaccination campaign is underway. Should all the Houses fall to Biden’s bidding there could be a significant deleterious impact upon investors due to expectations of anti-business policies, including higher taxes and over regulation. Due to COVID and politics we assume the odds are high that whatever the results of the 2020 election, it will be delayed by the most contested and litigated election since 1876, back when the outcome wasn’t confirmed until inauguration day (March 5, 1877). Ironically back then, racism was a major contention and the Compromise of 1877 enshrined harsh racism in the South for decades. Should mass mail-in voter identity delays and Supreme Court litigation arise post November 3rd, the stock market could remain stalled from November until well into January 2021. A Trump reelection, especially if unconfirmed until January, will likely lead to a sharp 2nd wave higher in stocks if a working vaccine is in production.

Guns have been firing in all chambers since the pandemic onset and should continue doing so into the election. Firearm sales always soar on fear and 2020 is the triple crown of fear: COVID-19 isolation, nationwide spike in violence and a Presidential candidate that vows to restrict gun ownership. Consequently, one micro sector of stocks that has outperformed the amazing tech led stock market are gun manufacturers. From the mid 1990’s until 2008 gun sales were flat with falling crime rates. Fears of Government gun confiscation and a wave of racial division may have spurred a record surge in gun demand under Obama. Firearm sales went flat under a pro gun Trump Presidency, until the current pandemic. From the moment the COVID inspired global lockdown began in March, gun sales shot through the roof. A triple whammy of virus, racial unrest and ability to buy guns have combined to guarantee a continued record pace of gun sales through 2020. Background checks for gun sales will blow away the records by about 40% this year, perhaps reaching 40 Million. 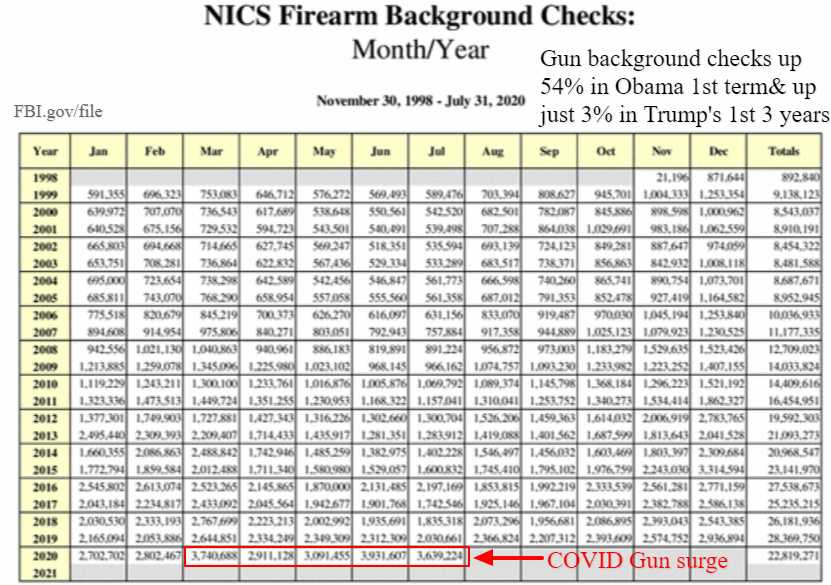 Gun stocks have already out gained tech leaders like Apple and we would expect continued high demand for firearms through the election and possibly until the COVID fears have evaporated, after mass immunity arrives. A Trump victory or an opening up of the economy after defeating COVID-19 would combine to squash these stock winners. A Biden win may cause one last rush to the gun store over fears that his supposed gun czar has promised an Australian style gun prohibition and buyback. Until the election, possibly a few months longer, all dips in these stocks can be bought, after which this group may begin to misfire. 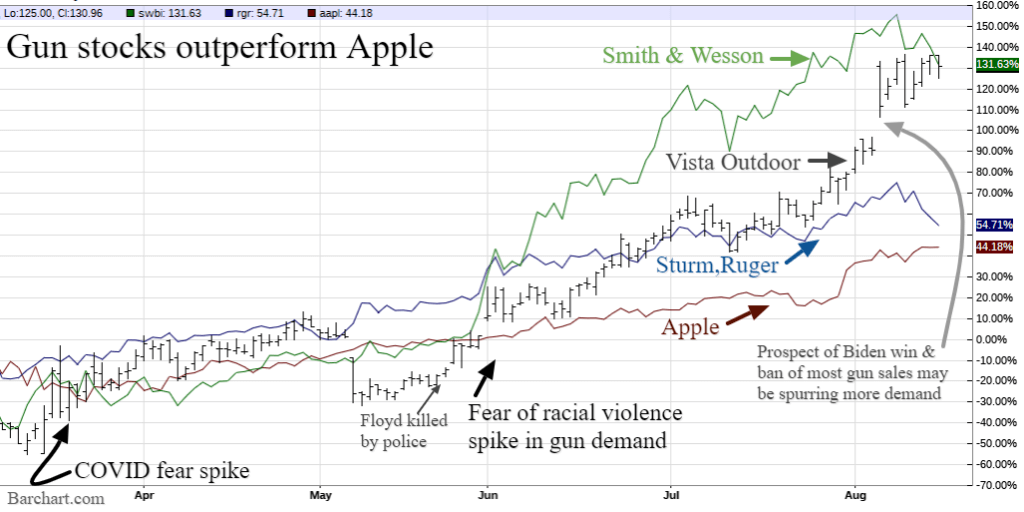 From Firearms to Fitness: Indoor fitness gyms are struggling, some chains and hundreds of independents will be bankrupt. However, Planet Fitness (PLNT) has the staying power to come out of the post COVID world as the most fit. With 30% of Planet Fitness gyms still closed and revenue down 78% year over year, it’s far from a stock market leader, but PLNT has plenty of cash to weather the storm and capture market share once the mass COVID inoculation wave approaches in 2021. In the meantime, the stay at home and social distance forms of exercise will continue to fill the void. Stationary Peloton bikes in the safety of one’s home, as well as outdoor bicycling are both booming. Market leaders like Peloton and Fox Factory bikes will continue pedaling ahead of the market until the vaccine arrives, at which time we hope to head back to the gym.

Housing is in a secular uptrend that transcends the pandemic or the outcome of the 2020 election. Median Home prices are hitting new record highs, but record low borrowing rates still offer affordability. With historically low home inventories for sale and Millennial’s starting family formation, requiring a higher ratio of homes vs apartments, this sector has miles to go before it sleeps. Unsurprisingly, the home builder optimism and customer traffic index is now at the highest level on record. Interestingly, past peaks in optimism had no correlation with tops in the housing market. Existing home sale closings were reported today as hitting the highest monthly level since 2006. The risk will come when COVID-19 is quelled by a vaccine that opens the economy up more fully and leads to a rise in interest rates that could stall housing for a few quarters.

Another concern is the cost of housing risk from lumber prices that have more than tripled in less than 5 months and are well above past records.

Looking at stocks that are mostly immune to COVID-19, the elections or even the economy points to the unique sector related to 5G.  The build-out of 5G (fifth  generation) communications is coming regardless of the world around us.  4G was a nice step forward, but 5G is 100 times faster and will accommodate millions of users per square mile vs thousands with 4G. In 4 years it’s estimated that 40% of the world will be covered by 5G, yet it has barely begun to be utilized today. Smart cities and smart car applications will spur another technology investment boom. Roughly $140 Billion in new fiber optic cabling will be required. The 5G stocks are already taking off, but the runway is still long and slow initially with increasing speed as adoption explodes in the 2021 – 2024 time period. Huawei from China is by far the dominant leader in 5G, but with the growing  Trump inspired anti-China fears surrounding spying and monopolies, 2nd tier Huawei competitors like Ericsson, Nokia and Qualcomm are getting an extra boost in business.

The few laggards in the 5G play currently are the infrastructure monopolies like American Tower (AMT), SBA Comm’ (SBAC) and Crown Castle (CCI). Their downside is limited with secure revenue streams and the upside should gain steam as the 2021 adoption phase kicks in.

Some of the stocks highlighted in this report are expensive, but have good tailwinds to buy the dips until at least until the election. The overall market may slow its ascent soon and later become paralyzed “post” election due to election result litigation we expect from mail in voting. Sharp stock market declines during this lame duck period from November 3rd until close to the inauguration on January 20 could provide an opportunity to shift investor portfolios from the high flyers to extremely depressed economic recovery stocks, which we will cover in an upcoming report.

An Apple a Day Keeps the Bear Market Away

An Apple a Day Keeps the Bear Market Away
Ready to start creating financial success? START YOUR FREE TRIAL