Best Job Gains Ever on 10 Million Miss in Unemployment

Consensus forecasts are never precise and during this historic health experiment inducing an economic heart attack to battle a pandemic, wide margins of error in expectations are unsurprising. Normally a forecast miss of 100,000 in payroll estimates is shocking, but adjectives are elusive when describing a consensus miss of 10 Million. Today the nonfarm payrolls for May were expected to fall by 7.5 to 8.3 Million and instead they rose 2.5 Million, the largest gain in history. The largest gains were seen in restaurants and bars, an area along with travel that has been the hardest hit during this 3 month mini-Depression. Instead of almost 20% unemployment, which everyone expected today, the rate fell to almost 13%. Furthermore, this data is based upon mid-May surveys when only modest reopenings around the country had begun. Continued gains in late May through June are virtually guaranteed, despite significant reporting errors. This continues to be a Bullish UPOD (under promise, over deliver) stock market.

Job gains in May were strongest in the hospitality sector as restaurants, bars and casinos called back their workers faster than estimated. Beleaguered airlines still report an 85% year over year drop in passenger gate traffic, yet travel is at a 10 week high and up 22% in the past week. Boeing stock leapt 50% just this week on the approval of restarting its critical 737 Max airliner, as well as the improving news of more airline routes being added. Stocks are soaring, the economy is still in a deep contraction, yet conditions are not as bad as feared. For weeks the data keeps coming in above dire estimates, causing upward revisions in economic and company forecast valuations. While our 2020 outlook and beyond has been Bullish since March, our bias has been too conservative short term. Strong Bull market up trends tend to make it hard to find a pullback to buy. During the past 11 weeks there has never been more than a 2 or 3 day decline, as a buy the dip mentality for a more V shaped recovery keeps gaining traction.

So with very high odds that the US and Global economy will continue to open up further over the next several months, regardless of any potential Covid outbreaks, it begs the question: what else might derail this parabolic stock market rebound? A Cold War with China is the only exogenous input visible that may create a deep pullback. However, this would be a rare Black Swan event, thus somewhat unpredictable at this point. Until this fundamental economic recovery starts over promising and under delivering, the Bull market rally can continue relatively unabated moving to record highs in all major indices this year. The recent acceleration higher in stocks has created technical overbought metrics in breadth, momentum and sentiment that make stocks vulnerable to a sharp correction. We expect some resistance and topping action in June in an overshoot short term, due in part to excessive option trader Bullishness. 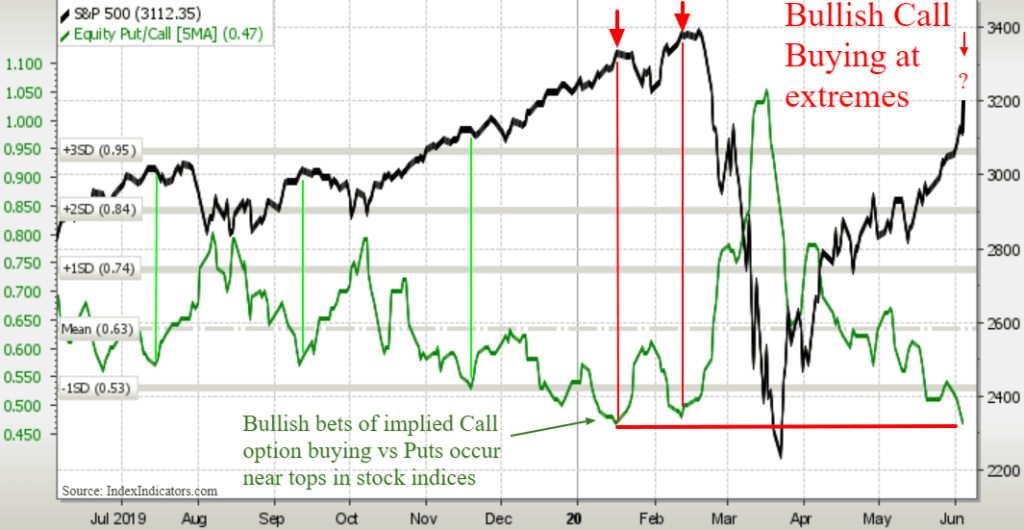 However, as long as the fundamentals of the economy keep exceeding forecasts, the technical corrections may be modest in the 5 to 10% range. Deeper pullbacks will arrive this summer as stock indices increasingly price perfection into the rate and amplitude of this expansion phase we are entering, but this is a Bull market where Central Bank liquidity and Government stimulus will continue to backstop an inevitable flattening out of this V recovery.

Billions of Stimulus Dollars in Quarantine