In 2018 the US economy expanded beyond its sustainable production capacity, juiced by massive tax cuts and global preordering ahead of Trump’s tariff hikes. As winter approached we warned that the recession Bears would become more vocal as Europe edged closer to an economic contraction and the Fed induced equity panic coincided with slower earnings domestically. The service and manufacturing sectors in the US have slowed their expansion in 2019 to levels consistent with about two percent GDP growth.

We still like our January 7th and February 1st newsletter comments that summed up our economic outlook this way: “A quarter or two of 2 percent GDP growth could occur, but we don’t see a contraction. Parts of Europe could enter a very mild recession and China may weaken a bit further along with the US, but anything more dire is not yet in our forecast… The stock market correction in late 2018 over fears of decelerating economic growth and weaker corporate earnings in 2019 may have been a blessing in disguise for the stock market and our economy. With extreme tightness in the employable labor supply and an unsustainable 3% GDP expansion rate, our country desperately needed a Goldilocks slowdown. A couple quarters of GDP growth in the 2 to 2.5 percent range to ease the 2018 supply chain overload and capacity constraints will allow increased operating efficiencies, inventory balancing and geographic shifting of resources.”

The cold winter of discontent for the US economy is now warming with the green shoots of Spring as investors have discounted the weak economic data and anticipate an export led global rebound in the 2nd half of 2019. With increasing confidence of an historic trade deal with China and monetary accommodation by our central bank, stocks have embarked upon an historic rally the past 17 weeks of almost 24 percent in the broad averages. We continue to expect record highs by summer with potential for a Buy the Rumor, Sell the News corrective action soon after a China Trade Deal is signed.

While hope springs eternal in this 10 year equity Bull market, signs of economic weakness linger in the rear view mirror. Intermodal rail traffic, excluding petroleum, has been soft the past 4 months and US export orders have been decelerating for the past 3 quarters. If lingering trade conflicts around the globe are settled over the next few months, purchasing managers and CEO optimism toward capital spending should trigger an acceleration in the US and global exports. Emerging markets would benefit disproportionately from rebounding export activity and a falling dollar. As long as a Trade Deal remains unconfirmed however, exports will be subdued.

The important US Purchasing Manager Indices (PMI) are stuck in the cooler awaiting news out of China. Optimism may surge if a trade deal is confirmed. Output is healthy, but orders and backlogs have been lowered until global trade deal clarity improves. Current PMI sentiment levels are consistent with our old forecast of 2 to 2.5 percent GDP growth in the US. 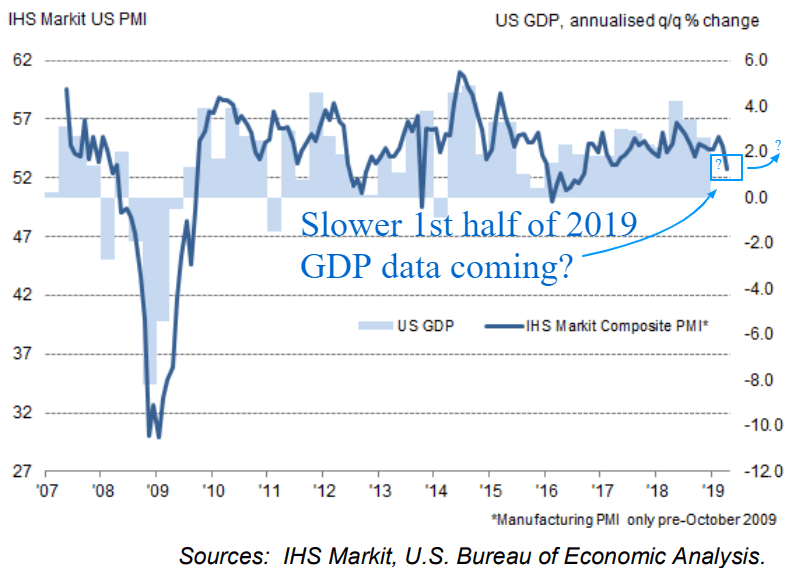 We still view the current GDP slowdown from unsustainable levels in 2018 as the pause that refreshes, assuming a Trade Deal with China is signed this summer. Our personal exposure to global manufacturing has witnessed expensive overtime labor and a record number of less efficient temporary workers to the detriment of margins and productivity. This labor concern mirrors the top concerns of all businesses surveyed and exemplifies a capacity constrained economy that has begged for an economic timeout. The last few quarters of slower growth has lowered input prices and temporarily eased extreme labor shortages and supply chain delays. Medium skilled labor remains very tight, but job openings have edged lower recently with the slowing global economy. However, the huge gap of job openings to the unemployed able to find work may not be closed until our economy enters a recession and reflects a secular demographic employment constraint. In our estimation a GDP recession is still 2 years or more down the road from the current perspective. 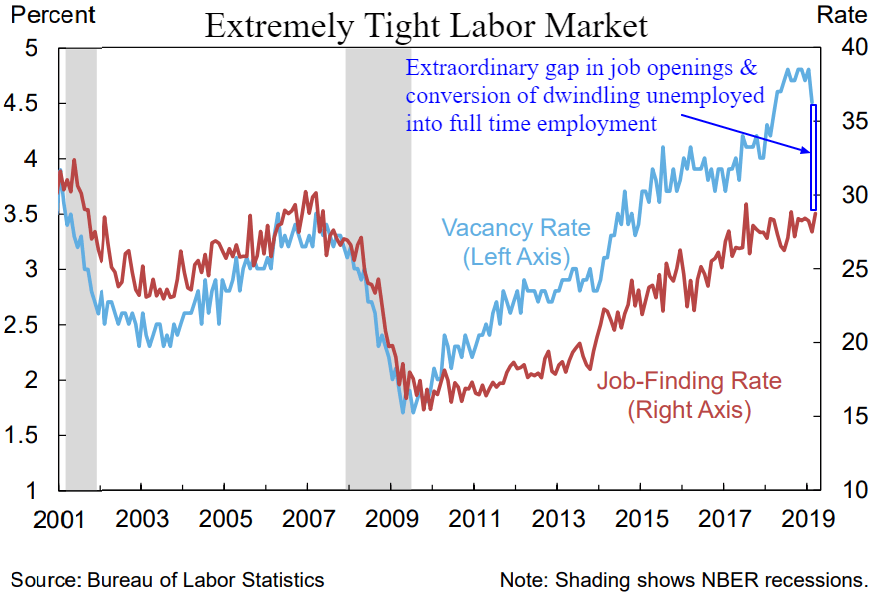 The truck driver shortage has been around for most of the past decade, but became an extreme traffic jam along with a shortage of trucks in 2017 and 2018 as the economy tested its speed limit near 3 percent GDP growth. Class 8 truck orders were hitting 12 year highs for most of 2018. In recent months orders have fallen 50 percent off their peak of 52,000 units per month only because the order pipeline is temporarily full due to lack of truck production capacity. Commercial freight remains vulnerable to renewed supply chain delays should the economy tick up towards 3 percent GDP growth again.  Investment in all areas of this economy will continue to favor companies that sell automation and productivity software enhancing technology.

Loan growth surged in 2018 with the most vibrant economy in over a decade, yet banks have not had to tighten credit due to their low risk loan portfolios. Despite Commercial and Industrial loan growth of 10 percent recently, we will not raise the yellow flag on this expansion until 15 to 20 percent of banks are tightening their credit standards.

The US economy was running too hot in 2017 and 2018 and the weaker data in 2019 is a positive setup should optimism return after a US and China Trade Deal arrives. With a strong consumer, an accommodative central bank, low default rates and an extremely tight labor market, the pent up demand building in anticipation of a trade agreement should spur a modest US acceleration later in 2019. More depressed regions in Europe and Emerging Markets should outperform the US into 2020 as exports rebound ensuing a new China trade deal.

Initially investors should expect a Buy the Rumor, Sell the News effect over the next few months as stocks surge to record highs followed by a 5 to 10 percent market correction soon “after” a China Trade Deal arrives (or a No Deal delay). Then the rally to record highs should resume into year end 2019 with a trade agreement.