After 3 years of stellar consumer confidence and soaring stock prices, investors reached a crescendo of exuberance and record setting optimism that warned of a market priced for perfection. Suddenly on our forecasted topping date of January 24th, the stock market caught Corona fever. Normally an excessively positive running of the bulls is a vulnerability in need of a modest correction and not a signal to run for the nearest fallout shelter. However, exogenous events such as the Coronavirus, are unpredictable. For a reality check, from the perspective of global contagion and mortality, this virus is likely to be minor in comparison to the annual flu that infects millions and typically kills on average almost 40,000 in the US, another 40,000 in Europe and almost half a million globally – every year! While the ultimate harm is unknown, history suggests the Wuhan Coronavirus outcome will be only a fraction of this normal influenza total, even though the economic impact will be multiples above normal. The annual global flu ritual as well as virtually all viral epidemics such as SARS and Corona are endemic to China. Instead of flu shots, mass quarantines and wishing for the improbable odds of timely vaccines for such outbreaks, there should be an intense global focus on cause and prevention “in China”. While China has become a technological leader in the global economy, they and much of Asia still have the vast majority of their population residing in third world conditions. As long as Farmers and livestock live under the same roof and antiquated food markets run without oversight there will be no realistic way to stop these pandemics. Fortunately these viral pandemics have never had a clear impact on the global economy or the various investment markets. This new China scare happens to coincide with a climactic run higher in stock markets that were quite vulnerable to bad news, so this time there is potential for a more notable short term correction. 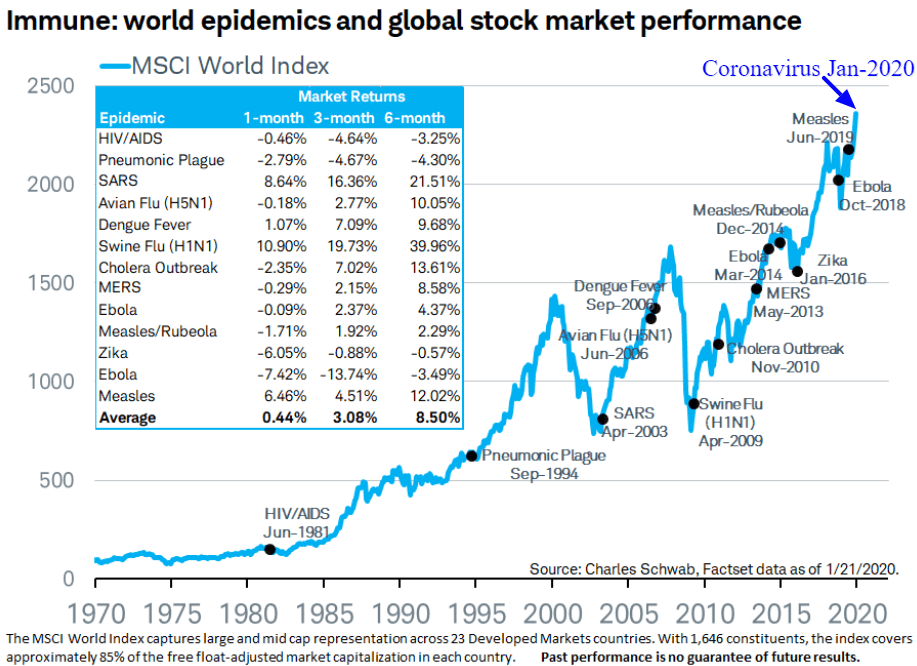 While we expect the death toll to rise exponentially in February, history implies that Corona will be hard to see in the rear view mirror of investors driving the stock market. One note of financial caution is that in the past these Chinese virus scares occurred when China was a minor player in the global economy. Today they are the worlds top consumer of metals, coal, food and fiber while being number two in Oil use. Shutting down chunks of the Chinese economy for weeks will have a real global anticipatory economic impact that deflates stocks, commodities and yields in close correlation to the growth rate of this contagion. This is a fleeting fear factor phenomenon infecting investment markets that will be compounded by State actions to restrict activity for public safety. The good news is that within weeks this Viral fear should peak with stock and commodity markets making a V bottom when we have reached our investment nadir. Thus far, stocks have only fallen 3% with many large cap leaders on the verge of record highs.

On the other side of the globe, China decided to shut down its stock market and quarantine 50 Million citizens on January 23rd. When trading was stopped, their stock market was down almost 5% from its January peak. With China opening their stock exchanges again for the first time this Monday February 3rd, the proxy indices suggest the broad Shanghai composite needs to fall 7% further to catch up to where markets have moved since the 23rd. It’s no surprise that the Chinese Central Bank (PBOC) is injecting Billions to quell the expected market panic this week. Currently the PBOC is supplying a mere $22 Billion into a $5.5 Trillion stock market. With China’s benchmark Shanghai market already overvalued by over $380 Billion due to halted trading after the 23rd of January, we suspect that any rally can be sold and the PBOC will be injecting Billions more in the days ahead as prices fall. Our short term projections favor this first leg down finding support at another 4 to 5% lower on top of the roughly 6 to 8% overvalued estimate from halted trading. This implies the near term risk for Shanghai stocks is 10 to 13% lower than when trading stopped on January 23rd. Should this decline continue as expected, then it will inject a layer of anxiety in US and global stock exchanges. {*Late Sunday update: Shanghai is down 9% in early trading.} 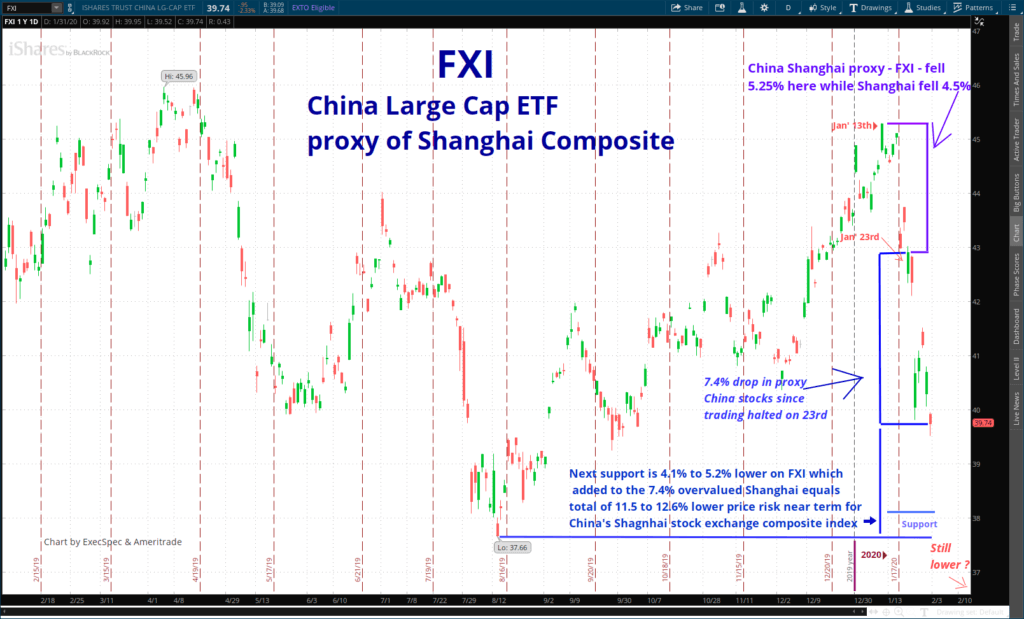 The next target level of support for US indices is near the 5% correction level or 3168 basis March SP 500 Index. While unknown Virus related risk remains, it’s best to wait for sentiment to traverse the chasm from extreme overbought toward modestly oversold or for signs of slowing rates of viral contagion. Currently we are in the middle innings of a potential journey toward oversold investor pessimism and Coronavirus transmission is in its parabolic growth phase.

The Coronavirus has some similarities to the concerns surrounding Boeing. There is absolute certainty that this Virus will burn itself out in the weeks ahead and the underlying economy and stock markets will bounce within a few months. Much like Boeing, there is virtually 100% certainty that its grounded 737 Max planes will return to action this year and the stock will eventually soar. In both cases the duration of uncertainty and degree of financial pain isn’t precise, but not a long term concern. Thus Boeing and stock indices related to the Coronavirus are unlikely to become extremely pessimistic and will avoid pricing in worst case scenarios given the confidence in longer term financial viability. The current negative news for the market and Boeing stock can continue to keep prices from rising in February, but once there is no more new news that is punitive, a very sharp rally will ensue as the afflictions are exogenous, but also finite. This Corona correction is a short term setback that is bringing forward earnings estimates back to 2016 levels and providing another buying opportunity for longer term investors.