Moribund Manufacturing data and slower growth guidance by Apple have exacerbated growing fears of recession, sending stocks plunging 3% on the January 3rd. However, exceptionally strong job growth and dovish support from Fed Chair Powell the next day sent stock soaring 4%. Making sense of the frequent news driven volatility is challenging, especially with the remaining major uncertainty of Trade Wars and Brexit nearing a climax. Since our Federal reserve relayed to investors on October 3rd they would hike rates sharply despite a slowing global economy, there have been no catalysts to keep equity valuations from depreciating.  Suddenly on January 4th, despite exceptionally strong jobs data, our Federal Reserve implied no more robo rate hikes were likely until inflation and GDP growth accelerates. With stocks having sold off roughly 20% from their October peak, the market has already priced in some global weakness as well as slower earnings and GDP growth in the US. While uncertainty remains, we continue to forecast a 1st quarter of 2019  low and new leg higher by the summer in stocks.

Strength in the US

While some Leading Indicator indices forecast slower growth ahead, the current picture continues to be exceptionally strong with consumers leading the way. Near full employment and more rapidly rising wages in a very tight labor market have allowed the Service sector to sustain strong growth with same store sales expanding at a record rate. The excellent demand for workers is still robust in many sectors with the closely watched manufacturing employment reaching new 10 year highs. With strong industrial backlogs and tight supply chains in this labor constrained economy, employers actually need a modest slowing of our economy to reduce overtime and enhance profit margins.

Weakness in the US

Signs of slower growth in the US are marginal, with housing, trade wars, manufacturing and junk bonds among the worries. : Housing is weak due to the labor markets inability to create sufficient supply, causing abnormally high prices. This is not the bubble atmosphere of a decade ago when a major surplus of homes existed. Mortgage debt service and default rates are extremely low and home prices should stop rising with the recent declines in interest rates. : In Manufacturing it was just reported that activity softened sharply in December. However, this ISM Index has been expanding at exceptionally high rates for 16 months and was long overdue for a major pullback. Concerns over a China Trade War may have also created caution here, but this could be quickly reversed upon a Trade resolution. : Worries of Junk Bond risk have also been rising since stocks began correcting last October, coincident with falling Oil prices. While a further Oil collapse toward $30/barrel would be a concern due to high yield bond defaults and tighter credit, this risk measure is well below previous warning levels. Trade War uncertainty and Chinese weakness have lowered Oil consumption expectations, but record levels of US oil and gas output have reduced prices and boosted economic activity. None of these concerns appear to be indicative of a pending US recession. In fact a mildly weaker economy short term, without a contraction, may postpone the arrival of the next recession. Consensus has all too clearly declared our next economic contraction will occur in 2020. We are skeptical of consensus on principal, but the economic signposts currently support our more measured perspective. 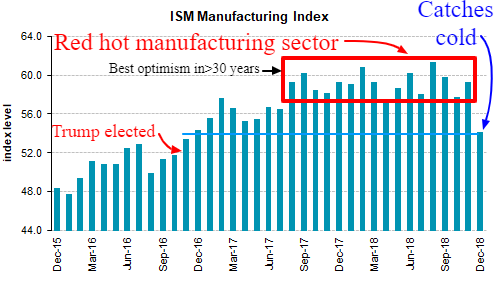 Apple, the worlds first Trillion dollar company, has lost 40% of its value over the past 3 months. Much of this decline is blamed on a protracted Chinese boycott during the US tariff battle. Prospects for Chinese iPhones will remain dim until stronger Global economic winds can turn this leviathan around. Weakness in Apple exacerbates the fears of a weaker China and a potential US recession. A Trade Deal with the US and China should quickly improve Apple’s outlook.

Chinese leaders had been slowing their own growth in early 2018 to quell overproduction and excessive debt creation, but Trump’s tariff escalation has helped push their manufacturing sector into contraction territory in December. In the context of the past 7 years however, pessimism in China’s manufacturing is a common condition without merit. With the larger Service sector remaining in a healthy growth mode and accelerating the past 2 months, it may be premature to read too much into China’s slowdown until a few months after the US and China Trade dispute is resolved. 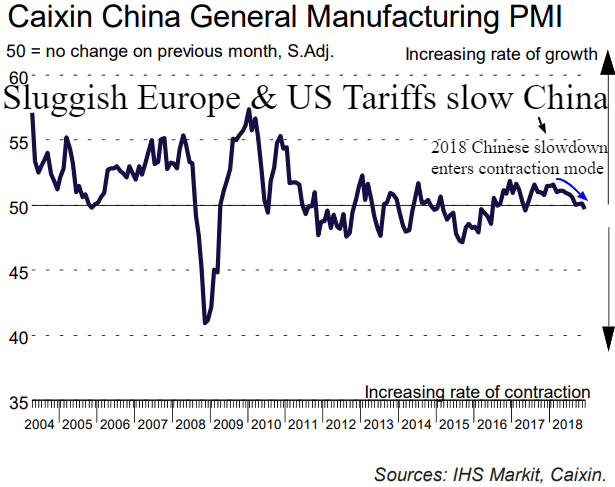 Our forecasted stock and oil market correction for the 4th quarter of 2018 and part of the 1st quarter of 2019 assumed weaker earnings and economic growth trends. However, our longer term optimistic assumptions hinge upon the idea that there will be no US recession and a 1st half of 2019 resolution to the US – China Trade War. A quarter or two of sub 2% GDP growth could occur, but we don’t see a contraction. Parts of Europe could enter a very mild recession soon and China may weaken a bit further along with the US, but anything more dire is not yet in our forecast.

Soybeans, Copper, Oil, Aussie and New Zealand Dollars should be beneficiaries of a successful US – China Trade Deal, if and when it arrives. All of these markets, as well as most foreign currencies, have been excessively sold by hedge funds and are ripe for significant appreciation in 2019 if a Trade deal is agreed upon. Soybeans may garner the most immediate and pronounced upside as it’s a consumable that China needs anyway and an easy gift to Trump with no significant impact on either country. It’s also encouraging that the Brazilian Soy premium from China’s boycott of the US has now disappeared as investors see China shifting to above normal Soybean purchases from the US. Ideally the US Dollar should break to the downside with sluggish 1st quarter economic data, supporting foreign currencies, commodities and emerging markets. While it’s premature to look for a stronger economy or accelerating earnings in the US, we still appear to be setting up for a 1st quarter low in the stock and oil markets.