You Want the Debt? You Can’t Handle the Debt!

David Stockman, former budget director for President Ronald Reagan, says “I think all hell is going to break loose,” as the result of the Trump tax cut. Past assertions indicate he expects a 40 to 70% stock market collapse, but no idea when. For Stockman it has always been about debt and that we ‘can’t handle the debt’.  In 2010, Stockman was a super Bear alarmed by the huge rise in US Credit market debt to $52 Trillion. Well, today we have roughly $70 Trillion. However, relative to our assets, debt isn’t that alarming. How much debt is too much? We’ll know when banks tighten credit and defaults soar sending the economy into a liquidity induced contraction.

> The CIO of Guggenheim worries that the strong fiscal stimulus (tax cuts) at a time when the economy is at full employment, may force the Federal Reserve to be more aggressive with interest rate hikes to keep inflation in check and a 3%+ Fed Funds rate he expects in 2019 will be the trigger for a 40% market hit to begin.

> Ray Dalio of Bridgewater expects an asset/debt bubble leading to alarming inflation and credit tightening by 2020.

> Well known Bear, John Hussman, expects a 60% plunge in stocks at some ‘to be determined’ point in the future, due primarily to excessive valuations and lofty earnings expectations.

Throughout this nearly 10 year Bull market false prophets have foretold of doom and gloom around the bend. Certainly this chorus of more credible Cassandra’s may be correct and gain the investor following that sends equities plunging. Remember Cassandra was the beautiful daughter of Troy’s King who was blessed with the gift of prophecy and cursed with no believers. We’ll see when credit and earnings reverse their uptrend to join the doom and gloom crowd. 2019-2020 could certainly be a top(as we have also eluded to in the past), but instead of forecasting a bubble and credit stress, let’s wait for them to appear. China and the mid-term elections are the primary concerns for us in coming months.

What worries us is China’s negative weight on the Emerging Market (EM). Argentina, Brazil and Turkey in particular are all having massive political turmoil and uncertainty that has caused a major flight of capital from their respective banking systems. Markets don’t like democracies becoming dictatorships or candidates running for office while in jail. When you add Trump’s continual escalation of tariffs upon China causing capital flight and devaluing their Yuan, it boosts the dollar and hurts commodities. Commodities are the bread and butter of EM countries, thus China’s woes add to 3rd world country debt risk.  Brazil and Turkey are unlikely to lead to “contagion” due to their chaotic politics, but further slowing in China may trigger contagion if this trade war poker game lingers too long.

So far China and EM countries are waving the yellow warnings flags which have yet to rattle the strong US economy and equity Bull market. This year the blue chip Chinese stock indices have retraced about half of their gains from 2016. A further slide to their 2017 lows would likely stall US stocks over global trade flow concerns. 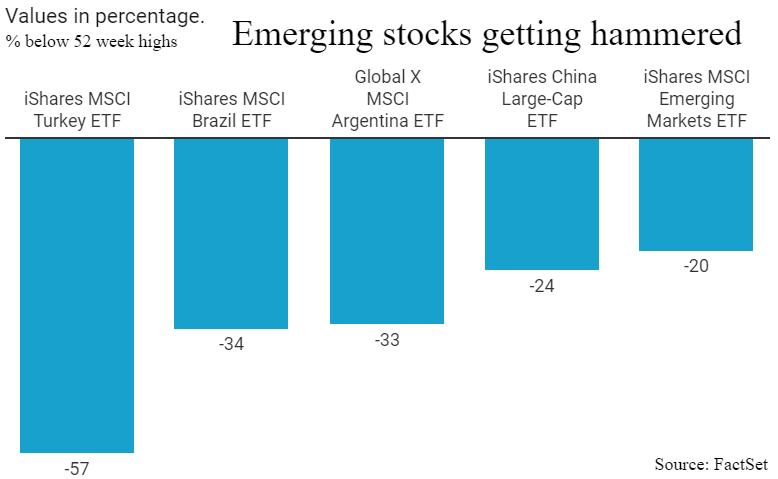 We mentioned commodities as a barometer of some EM countries like Brazil. As long as Brazil’s currency (Real) depreciates, we will see lower commodity prices such as Coffee, Cocoa and Sugar. Coffee and Sugar are more oversold basis Fund managers than anytime in their history. However, any potential new Bull market will need the US Dollar to stop appreciating and the Brazilian Real and the Yuan to stabilize. Look for Brazil’s October elections to provide some stability there before expecting a bottom in Coffee and other commodities.

We mentioned the US mid-term elections along with China as another growing risk for our stock market. Any perceived disruption of the current fiscal economic agenda should lead to a downward adjustment to expectations and corporate valuations. Losing control of both the House and Senate would be a new barrier to the duration of this record economic expansion and Bull market in stocks. Actual impeachment is highly unlikely due to the 66% voting majority required. However, losing the House will be an annoyance for Trump, while losing the Senate would be a more serious impediment leading to endless lawsuits and failed impeachment proceedings. Polls expect Trump to retain the Senate and keep his agenda at least partially on track. We know what can go wrong with EM countries, China, global trade and Trump’s political liability, but investors should ponder what will happen if those Black Swan events are positively resolved: faster economy, even better earnings and higher stock prices.

Are Investors Tired of Winning?