Where is the Next Sovereign Debt Crisis?

US had a public debt of just $75 Million in 1791 and for more than a century afterwards the total public debt averaged just 2.5% of US economic production (GDP). Today’s Government Debt is estimated to be $22 Trillion at roughly 107% of the size of our annual GDP. Historically, during economic downturns our political leaders have promoted above trend deficit spending to get reelected and allegedly to boost the economy. After decades of profligate spending since we abandoned the Gold backed Dollar, the fear of a debt crisis has grown with each recession. When will the inexorable rise of US or global debt become the straw that breaks the camels back? Or will we always hear the false cries of Chicken Little that “the sky is falling”? (1800’s Folklore)

In recent decades we have increasingly relied upon the kindness of strangers to bail the US out of recessions as countries with excess reserves have bought an increasing proportion of our debt. They send us their goods, collect our dollars and invest those dollars in our Treasury debt. Historic episodes of converting those Dollars into supporting our debt occurred with OPEC in the 1970’s and Japan in the 1980’s and 1990’s. In the 2008 crisis China became our great wall of debt supporter with over a Trillion dollar of US Treasuries. In recent years China, Japan and others have curtailed their penchant for not so rare US debt with their own domestic stimulus itself and risk diversification priorities. Since China helped fund our 2008 subprime mortgage meltdown the US has had to rely increasingly upon itself for debt financing. The US Government is selling greater proportions of its new debt issuances to itself to create dollars (Federal Reserve and Government agencies own about $9 Trillion of our national debt). We call that printing money. In this brave new world the financial markets have yet to blink, trusting the full faith and credit of our Government, as there is no realistic alternative.

US debt surpassing 100% of our annual GDP sounds worrisome, yet China and Japan are much higher. While much of China’s debt is held in its quasi Government owned corporations and municipalities, the total debt to GDP is estimated to be near 270%. Using comparable data, the US debt to GDP could be over 200%. Chinese business debt is about 150% of GDP while the US is roughly 33%. Given the tight control over business and lack of trustworthy data, it’s a long term concern that debt risk in China is hard to assess. As a state run country we assume they will keep pulling levers as needed to prevent panic, yet their increasing focus on liquidating material stockpiles and curtailing speculative credit is a sign their inner circle has furtive concerns.

Like China, Japan also has a massive debt liability mess, but with more transparency. With a debt to GDP ratio above 250% and proportionately larger than the US quantitative easing reserves to sell back into the bond market, Japan needs strong growth in output and working age population to sustain this ominous trend.

Unfortunately demographics are working against Japan with the lowest fertility rate and worst ratio of seniors to young workers in the Western world. This insular country has boldly incentivised foreign workers to stay and fast tracked permanent residency rules. It’s a good start, but like other Western countries, unless they open up citizenship to unskilled workers from third world countries, Japan will struggle to support its aging population. 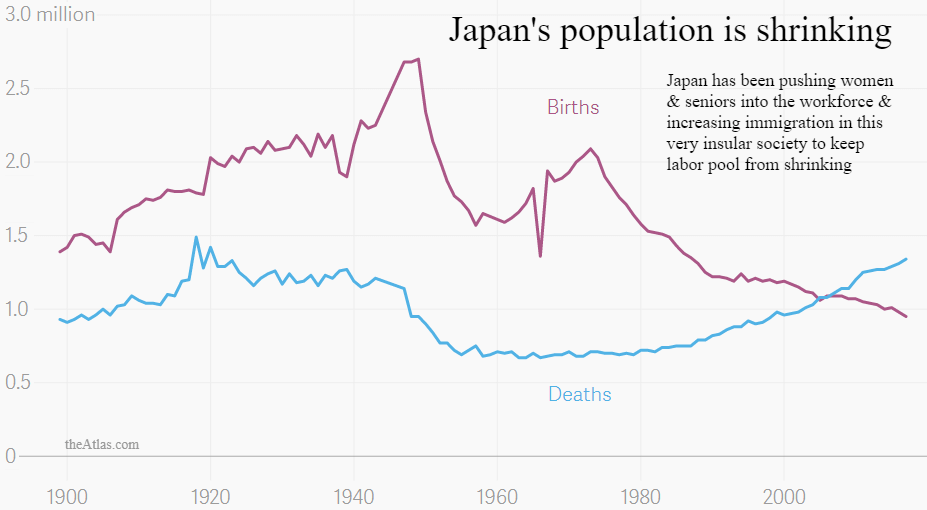 At least the US has bond instruments of all kinds available to international investors to support our leveraged debt structure, while China’s bond market is still developing and the risky Japanese 10 year bonds still have negative yields. The US has tons of liquid financial assets to sell and China does not. Where the market cap of the S&P 500 alone is nearly 110% of US GDP, China’s Shanghai Composite has a market cap of 30% of China’s GDP. China and Western countries have long term hurdles ahead and each global recession phase in the future increases the odds of losing the confidence of the markets upon which Governments rely in a world of fiat currencies. While investments in education, infrastructure and technology are always core issues for US and Western countries, the real concern is demographics and attracting a working age population from abroad to reverse the long term deceleration of economic growth. In the meantime, every recession increasingly risks snowballing into a depression without an ever greater monetary response by Governments. Thus Central Banks (mainly the US, Japan and China) will keep rushing to print even more money whenever a recession looms large to prevent an out of control panic such as the subprime debacle of 2008. Our job is to identify recessions before they arrive and shift investments accordingly.