By early 2008, a few months after a major Bull market peak in stocks, Yellow Flags on the US economy had turned Red across the spectrum. Bond spread risks were spiking, consumer and business confidence surveys collapsing and many indicators were signaling trouble. Today’s purveyors of gloom haven’t given up the ghost from the last recession and warn of impending doom due to a record Seven Million Auto Loan defaults and the worst default rate in almost 7 years.  While we are suspicious of this Car Loan crash report and its importance, we don’t see the Red or even Yellow flags that presaged the last recession. There are no signs of a downtrodden working class throwing in the towel. While it’s not good news to see more people failing to pay back their car loans, by most measures the vast majority of the population is fairing well.  Poverty rates are near record lows, wage growth rates sit at 10 year highs, consumer debt service ratios are at record lows, jobless claims are near a 49 year low and consumer spending has been exceptional.

What about car loan defaults? The Equifax credit report differs from other credit agencies, but even here, note the gradual trend in Equifax estimation of rising delinquencies. From 2006 through 2008 there were a series of delinquency spikes from Mortgage, Credit Card and Revolving loans as the economy worsened. This time we see a gradual rise in delinquency of Auto loans but nowhere else while the economy has clearly been improving. If the Equifax data is an accurate reflection then it appears to be more an aberration relative to the economy and a management oversight issue that will be resolved without dire consequences. 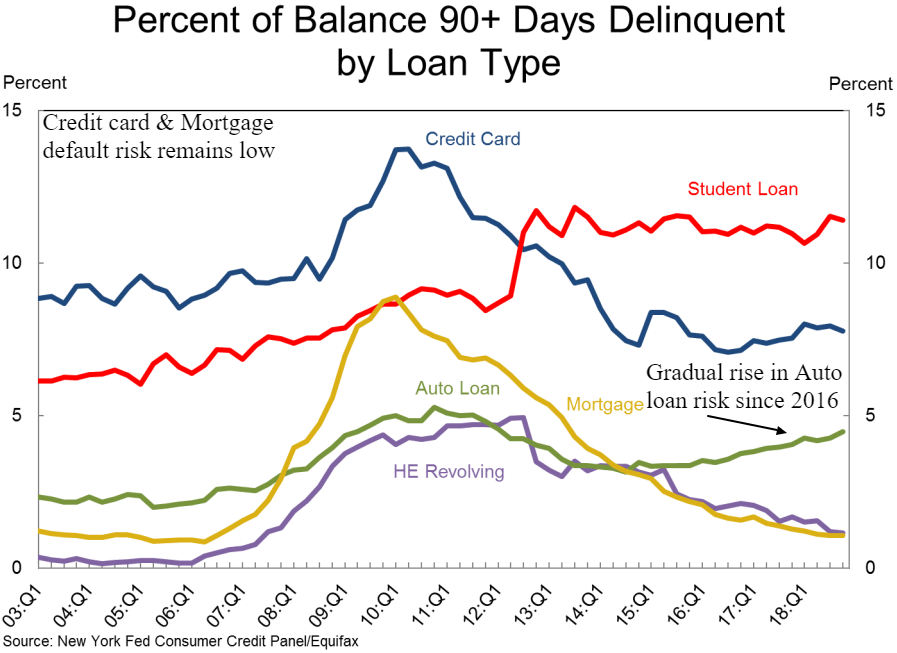 The rise of millennial car buyers over the past 5 years with lower income and credit scores may be a factor in the Equifax reports. Since 2014 the more volatile under 30 car buyers have accounted for the bulk of new defaults, which contrasts with the sharply increasing delinquency rates of all age groups prior to the Great Recession of 2008. 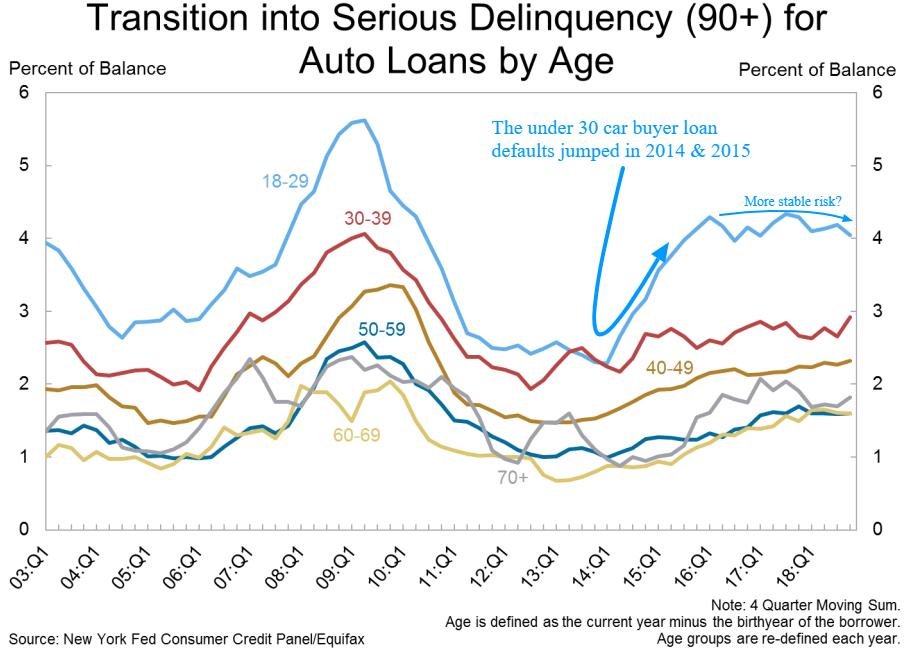 Lenders have kept their loan standards higher since the painful lesson of the last recession, reducing their exposure to sub-prime borrowers and focusing on the more credit worthy car buyers. The modest rise in sub-prime lending from 2012 to 2015  has been coming down and defaults seem very manageable at this stage, assuming our economy doesn’t suddenly plunge into a recession. 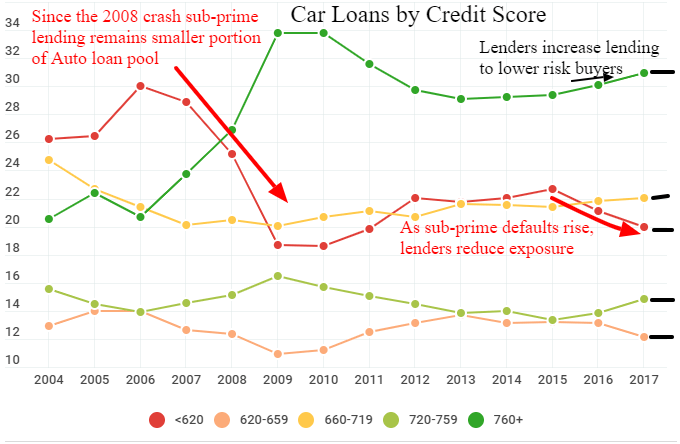 The whole premise that there is even a multi-year high in Auto loan defaults is questionable when comparing Equifax to other credit monitors. Experian is equal if not larger than Equifax and indicates near record low default rates, more in sync with the economy. The survey sampling  methodologies are different between these 2 major credit watchers, but Experian’s more ebullient data certainly makes more sense. This healthy view of Auto loan defaults by Experian looks much the same as their Credit Card and Mortgage loan delinquency rates that also remain very low. Hard to see any consumer stress here.

It might also be a concern if Consumer sentiment plunged as in 2006/2007 or late 1990, but the US Census Consumer Confidence and University of Michigan Sentiment measures remain strong after their ephemeral response to the panic drop and rebound in the stock market since December. Should the Michigan Sentiment fall into the lower 80’s we would be more concerned. 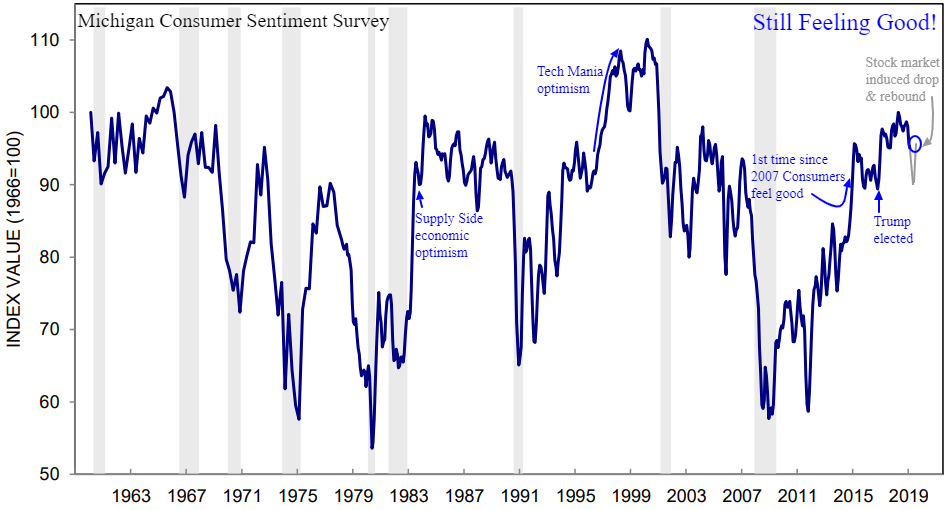 With wage growth near a 10 year high just under 4% and low borrowing rates, consumers are in excellent shape to handle their debt loads. Total household debt service payments as a portion of disposable income is the least risky on record and still falling. Historically consumers require far more elevated portions of their paycheck to cover mortgage, credit card and car loans prior to an economic cycle peak.

One more view showing the health of consumers and disparity with the Equifax car loan reporting is the strong consumption trend. While some retail sales reports claimed a nosedive around the Holidays, Mastercard reported a 6 year high in Holiday spending, up 5.1% over last year. Mastercard also reports another strong 19% jump in online purchases. Same Store sales reported by Redbook have tailed off to a strong 5.2% growth after a stellar 9% growth in late December and early January. At the time we stated that this record Redbook sales data was another sign of a confident consumer and opined that growth would fall back under 5%. We wouldn’t be surprised to see zero to 2% growth briefly before a rebound in sales by summer. If consumers were struggling to make their car payments the past few years it’s unlikely they would have been able to accelerate their consumption as they have since the last Presidential election.

Where is the Next Sovereign Debt Crisis?

Where is the Next Sovereign Debt Crisis?
Ready to start creating financial success? START YOUR FREE TRIAL