THE topic of 2020 and beyond is the response to the Covid 19 pandemic. The Government lockdowns devastated the economy and stocks. Fiscal and monetary stimulus boosted the economy and stocks faster than anyone expected. Global Governments created a micro Depression in March by shutting down the economy and then injected Trillions in stimulus money to replace lost consumption and partially preserve the labor force. Now that the vast majority of stimulus money has been consumed, helping to generate a record 32% US GDP growth in the 3rd quarter, the economy is now slowing again just as Covid is spiking worldwide ahead of a bleak winter infection season. The Good news is that each new wave of higher infections has correlated with relatively lower hospitalizations and far lower fatalities. Treatments have improved, but more importantly the age group exposed has shifted to the less risky younger age groups. Between May and August the number of new Covid cases in the over 80 age group fell 50%, but cases of those in their 20’s doubled. Regeneron may be great, but the seniors have learned a new trick in keeping their distance.

This is not a US centric virus, as evidenced by the 2nd wave of the pandemic in Europe that has been even more rampant than in the US. All of Europe, the UK, Russia and formerly untouched Ireland are all experiencing an explosion of cases that have triggered a major new wave of economic lockdowns. The failure to pass stimulus in the US and our recent rise in hospitalizations have created modest downward pressure on our stock market. However, it’s the European Government restrictions that have triggered the majority of the current October stock market correction around the world. Should South Korea, Japan and China also report a sudden rise and new lockdowns, then global stocks would enter a short term panic phase. So far, the more modest Asian 2nd wave peaked in August with no signs yet of a winter resurgence. 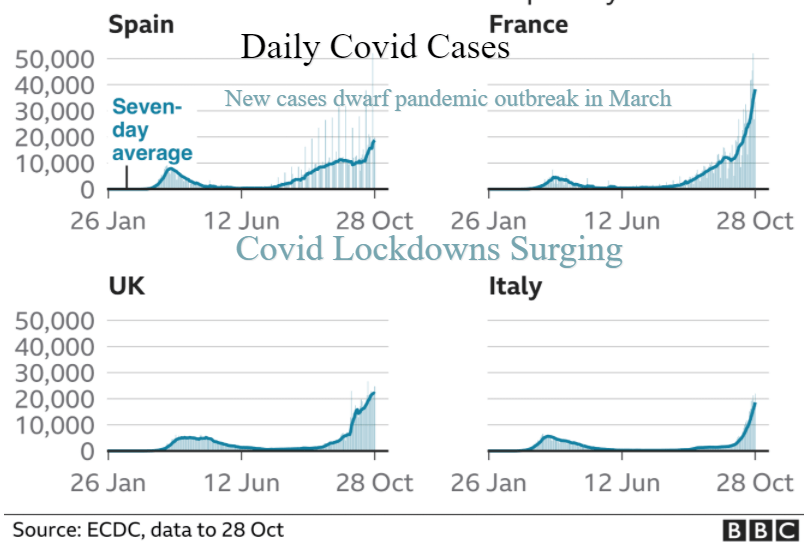 An expected record economic rebound in the US and around the Globe in the 3rd quarter is quickly rolling over with estimates migrating closer to zero growth by year end. Yet we still maintain a buy the dips equity market posture, especially if we move into the 11 to 18% correction zone. Smart money knows that the more the economy slows, the greater will be the eventual Fiscal and monetary stimulus provided. For Europe, relief should arrive before year end. In the US it may be stalled until the end of January, but investors will anticipate this confident eventuality and prevent stocks form falling too far. Our technical indicators (below) reached extremely overbought Call option buying in mid October that may require another week or two lower in stocks to reach oversold levels for an optimal entry for investors. The economic outlook by mid 2021 or earlier looks very strong with plenty of Central Bank and Fiscal support, so lower stocks this quarter are an opportunity to buy tech pullbacks and value stock laggards that remain severely depressed.

Will Inflation Return After Covid?