As the COVID-19 epidemic in China crept into the headlines in early January, the economic uncertainty sent Oil down a modest $10/barrel into the $50’s. When the virus broke out in Europe and the US in late February, the evolving pandemic finally rang alarm bells and crushed Oil consumption forecasts, triggering 20 year lows at $20/barrel. Most forecasts now expect 10 to 20 Million barrels per day (mbd) drop in demand globally from 100 mbd. While many misdirected their focus to supply excesses, exacerbated by a market share battle between Russia and Saudi Arabia, the primary ailment of Oil is a virus. Currently about a third of the worlds population has been mandated to limit or halt economic activity, creating a massive shortage of storage space for the growing Oil supply glut. Russia and OPEC would lose even more petrodollar Billions by curtailing production to support prices. Trump can finish filling our Strategic Petroleum Reserves, but this will not change the supply and demand calculus. It’s a Sisyphean effort to artificially boost energy prices until the COVID-19 contagion curve rolls over. While the medical emergencies persist and the exponential infection growth continues, Governments will increasingly mandate reduced activity that will keep adding to the Oil surplus. US drillers/ frackers profitability may require the $30’s and $40’s, but most will keep producing at a loss until enough small time producers are forced into bankruptcy. The energy Bear markets in 2008/2009 and 2015/2016 witnessed larger Oil price drops in dollar terms and on a percent basis than today, but this drop has been rapid and further below the cost of production than in the past. A base building phase in Oil prices should begin over the next 2 months, but likely from lower levels as the rapid building of excess supply will keep forcing prices to new lows until the contagion curves peak and efforts to resume currently shuttered economic activity begins. The good news is is the majority of this sudden consumption collapse will return by year end and volatility will fall back to earth. 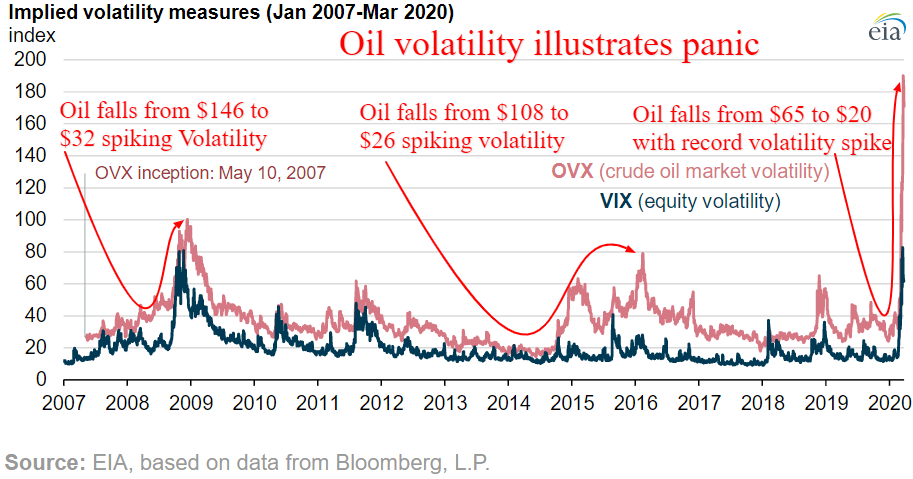 Large Speculators and Managed Money hedgers are major players and typically liquidate most of their net long positions at extreme price lows. In late 2008, as Oil approached its nadir at $32/barrel, their net positions reached the zero bound. While the 2016 and 2019 reduction in net longs shown below may be all that is needed, we wouldn’t be surprised to see a net neutral or even net short commitments by these hedgers once again in April or May. While the energy markets may add deflation to our system for months to come, the price lows are likely in the April/May time-frame assuming global economic lock-downs begin to ease. As illustrated below, prices persistently fell as contagion awareness spread. Oil is now set up to break the important $20 support before finding buyers in the $16 to $19 zone. If prices fall quickly before the pandemic curve rolls over and viral treatments arrive, then $12 to $13 has potential in April. Some energy producers actually speculate that price can move into the $5 area and even below zero as a potential 20 million barrels per day (mbd) excess supply glut could force some producers to pay buyers to get rid of excess Oil. Negative Oil prices seem like low odds, but would be more shocking than the negative interest rates that have now appeared in our US yield curve. While Trump’s effort to add 77 mbd to US security reserves in Louisiana and Texas sound helpful, these reservoirs can only be filled at 2 mbd and unlikely to stop the carnage until our economy stops its free fall and begins opening back up. The stress on banks and energy sector bankruptcies will escalate trepidation near term with further damage to the stock market that always accompanies large drops in energy prices. Currently we are only targeting Oil in the teens during April with a major low likely in the April/May period along with the stock market. 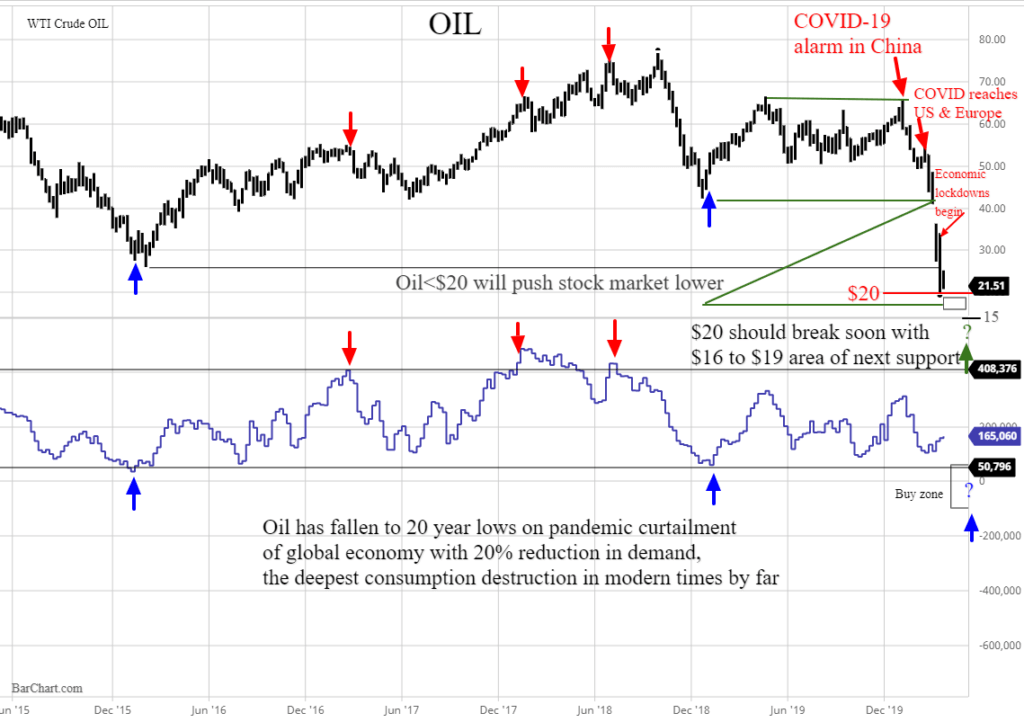 Oil is on the verge of thrusting through to new lows again this next week breaking the important $20 threshold to test $16 to $18/barrel. Should this decline occur, stock indices will likely head back to test their recent lows.