Covid-19 trends are critical to our health, economy and of course the stock market as we all struggle to determine future valuations in this historically volatile environment. After a huge 45% rally in stocks since the March 23rd lows, the market went into cardiac arrest for a day losing 6% in value over fear of a renewed surge in Covid-19 cases. Even though many states will refuse to enact another punishing stay at home economic shutdown, regardless of Corona deaths, the fear of reduced future consumption has sparked investor concern of far longer earnings winter than previously forecast. The CDC and epidemiologists are a cautious bunch, erring on the side of being prepared for the worst with little regard for unintended consequences. Perhaps their renewed yellow flags on the pandemic will be prescient, but looking at the relevant charts does cast doubt on the credibility of such dire pronouncements that require more stringent self isolation. US Covid Cases have been falling since mid April, but fatalities continue to fall at a far steeper rate, despite CDC alarm. Medical protocols have improved and the rising cases are in part due to increased testing with lower morbidity rates. Certainly from a national perspective, pandemic death rates are falling. 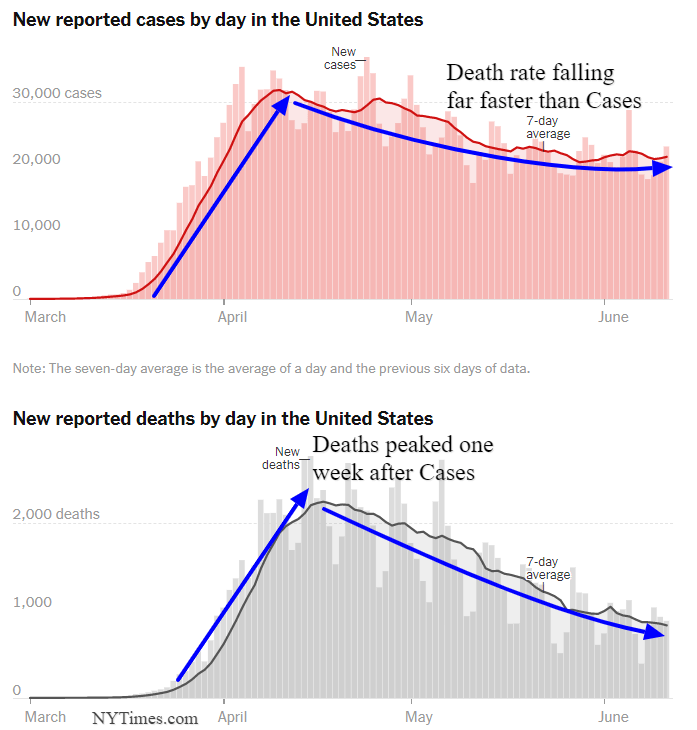 While many understand that national and global numbers show improvement, authorities highlight their “I told you so”  phrase regarding Corona hotspots in the US due to the reopening. Two thirds of US States show falling Covid cases, so we highlight 5 of the biggest hotspots the CDC is concerned about. While deaths are more important than cases ultimately, we display both below. In California the Covid rise was initially modest compared to the Northeast US, but it has stayed elevated longer than most. Like all states, we see that cases and deaths moved in a morbid harmony into late April. Since then, cases have zoomed higher while fatalities keep falling. Given how slow California has been to reverse their strict stay at home mitigation edicts, most would have expected a faster drop in death rates. No alarming trends here yet. 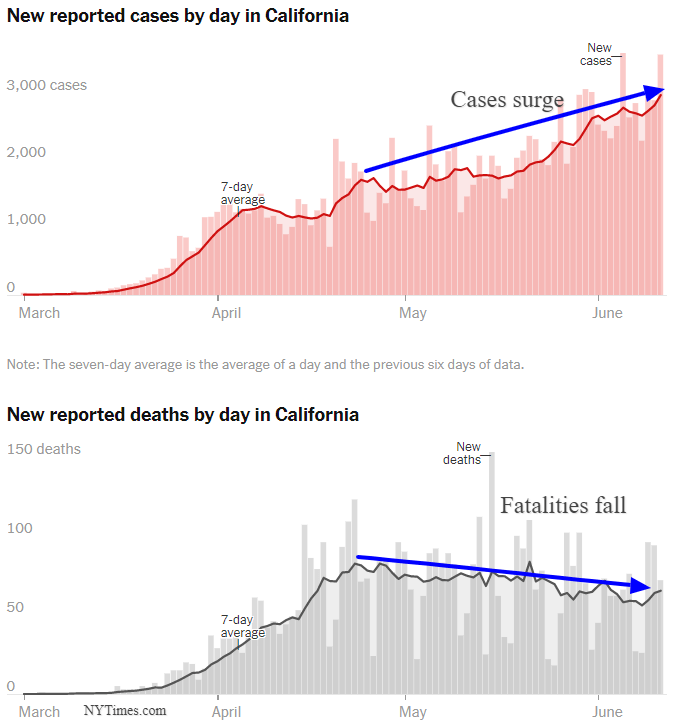 Arizona has a very high risk elderly population and one of the larger rises in case numbers. Despite this out sized spike, fatalities have not begun rising. Maybe death rates would have fallen further without any reopening, but so far the trend is not jumping with cases and increased testing. 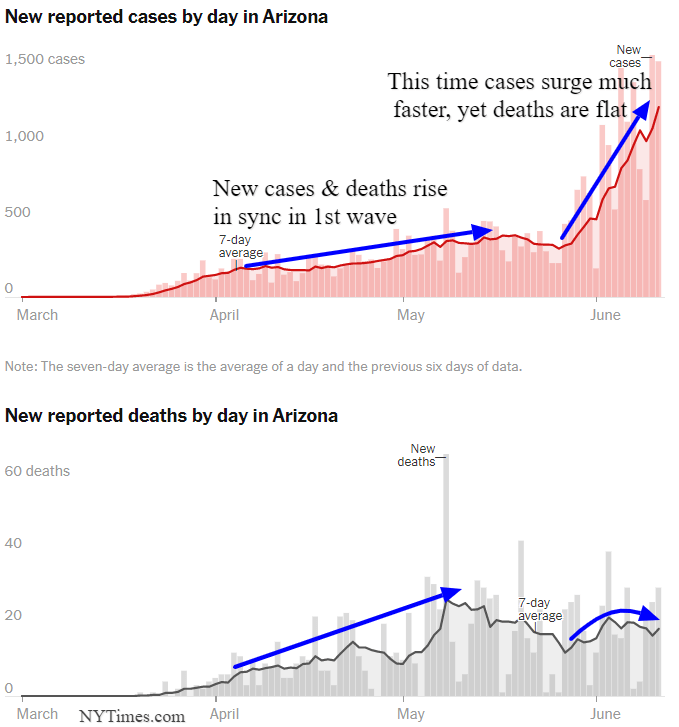 Florida was criticized for early efforts to open their economy. While increased testing is a factor in rising Covid cases, morbidity rates are not moving up. Florida has been commended for their health protocol for nursing homes compared to New York.  The Northeast Governing ineptitude of forcibly infecting Covid free nursing homes and Covid free hospital floors with deadly directives was a tragedy that has negatively skewed the national data. So far Florida is handling the rise in cases as deaths are flattening at lower levels. 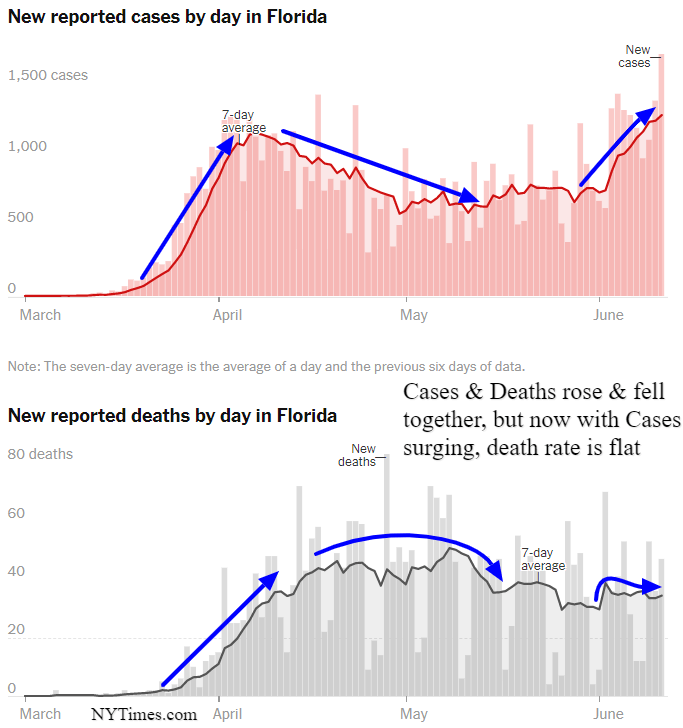 Texas, more specifically Houston, is also showing a large Covid case acceleration. Yet again, death rates seem to be in no danger of following cases to new highs. The usual 5 to 10 day lag in death data should have been evident by now if the CDC warnings were correct. 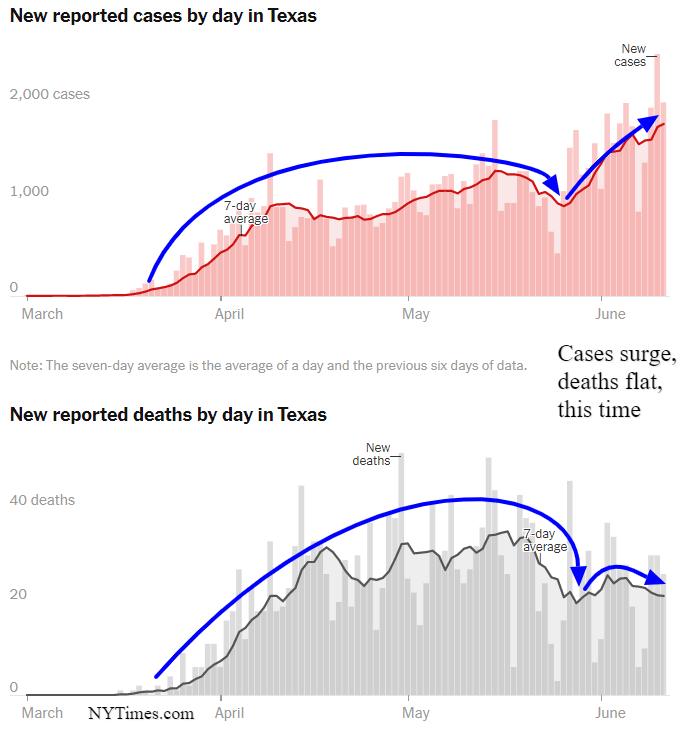 Florida, Texas, and Georgia were among the states that opened early in late April and early May. Vigilance is warranted, yet their fatality results are not alarming or any worse than other more medically cautious states. From an investor perspective we would observe a pro and con in examining the national data and medical rhetoric. A national 2nd wave in Covid Cases may emerge, but thus far it appears that the risk of surging fatalities or hospital capacity shortages are not a significant concern. This should be a positive longer term for the economy and stocks as we await a cure. However, even a false alarm could elevate the summer fear factor enough to trigger some Mayors and Governors to talk some citizens back into their caves. Mandated mitigation efforts or mere political rhetoric that more precautions should be taken for the pandemic will be enough to curtail spending again and reduce the multiples of future market expectations. Stocks are not valued on current financial and economic data. They always place a premium or discount on what the future economy and stock market value will be 6 to 12 months in the future. The vibe has been increasingly positive since the March lows with incessant focus on flattening the Covid curve and reopening the economy. Suddenly this week the sentiment shifted for the first time to concern of a re-steepening of the Corna curve and need for more harmful social mitigation efforts that could depress stocks values once again. A correction in stocks after a record 45% run up in 10 weeks was overdue, but we continue to expect selloffs to be buying opportunities. A full recovery requires a Covid-19 cure or treatment that is many months away, but Government and Federal Reserve backstopping efforts along with a steady flow of vaccine progress, should continue to support this market, preventing a more serious collapse to new lows. Our biggest caveat emptor concern would be a March – April type acceleration of Covid death rates that would send consumers back to their bunkers waiting for more welfare checks to arrive. This would be good for Netflix, Activation Blizzard, Zoom, Teledoc and a plethora of already booming stay at home type stocks, but disastrous for the general market.  Such a shock could negate all the stimulus by central banks and Governments, destroying long term confidence in the US and Global financial system. While a pandemic that has no cure is impossible to predict with certainty, there are few signs in the US or Europe that such a worst case scenario is warranted. Thus we remain optimistic that the cycle has bottomed as we declared in late March and when our indicators move back to oversold, we will be buyers.