May 12, 2015 Global Economy, Speculator, Stock Market, US Economy No Comments
0

Clinton Cash? How About Corporate Cash?

During the 6 year recovery from the Great Recession of 2008/2009 US stocks have tripled during an abnormally slow US and Global economic recovery. US GDP during the recovery phases in the 1980’s and 1990’s averaged over 4% rates of growth. Even during the aborted Bush era recovery the GDP averaged over 3% growth. However, the past 6 years have barely achieved 2% average growth rates despite the most aggressive US and Global monetary stimulus in history.

Official U3 unemployment measures those who have been looking for work and unable to find it over the past 4 weeks, but this recovery is the first to have so many be taken off the official rate while still wanting a job or better pay. At 5.4% U3 unemployment compares favorably and is forecasted to drop into the 4’s near year end. U6 with marginal workers that have given up or seeking full time work is still 10.4% and needs to be under 8% for a healthy fully employed economy with real wage inflation approaching  3 to 4%. Looking at the chart above captures that slack between U3 and U6 historically that our economy needs to absorb. While the economy would be witnessing much stronger inflation and GDP rates before U6 drops to 8%, we would expect the all clear signal to flash by 2017 – at which point a major economic top is likely in the proximity. For now slow GDP and high U6 unemployment is good for debt service and corporate cash.

The historic low debt service costs and cost cutting in a cycle that doesn’t require normal investment expenditures has assisted corporate America increasing their cash hoards with few choices other than increased returns for shareholders through share buybacks and dividends. By mid-2015 US companies will have hit new all time record levels of buying back their company issued stock. While Apple led the way with $6 Billion of share repurchases this past quarter, the total expected from mid-2014 to mid-2015 should easily exceed $600 Billion in the SP 500 Index companies with over a trillion in total returns to shareholders. Interestingly there has been some seasonality to share buy backs as the February to May time frame typically witnesses the strongest company cash allocation toward buying back shares. This extra buying power often coincides with overall strength in the stock market. The 3rd quarter slowdown in repurchases can coincide with some market weakness. 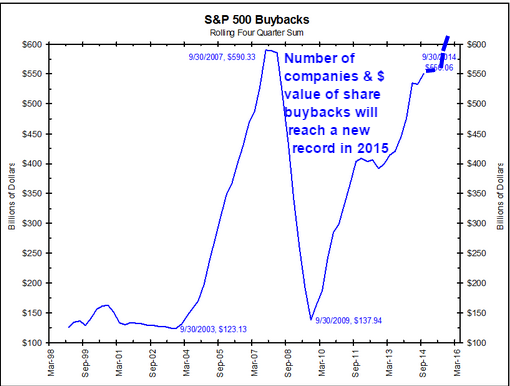 The fact that stocks have struggled to reach new highs in 2015 in spite of this corporate piggy bank being thrown at the market may not bode well for potential seasonal weakness into the 3rd quarter. Longer term the excess cash for Mergers and Acquisitions (M&A) and share repurchases can continue for a few years as interest rates begin to normalize and the yield curve flattens toward a tightening climax. As credit rates rise and Europe begins yet another recovery attempt, well behind the more mature US cycle, we would expect the M&A activity in Europe and Asia to heat up.

Margin levels are excessive, debt levels are high, but equity appreciation has risen faster thus delaying the typical rise in the debt equity ratio as an economic cycle matures.

We may have to go back to the 1970’s or 1930’s to find a recovery that has remained so illusive here and abroad. While the long term deflationary burden of debt levels and demographic trends remain a significant risk factor into the early 2020’s, the good news is the cost cutting efficiencies and monetary stimulus has added a surplus of cash to a system that has less need of leverage in a world of slowing consumption. For now consumers have refinanced and have achieved record low debt service ratios with idle cash and pent up demand. Corporations have also refinanced debt and used the excess reserves to return cash to shareholders through dividends and boosting stock values by shrinking outstanding shares available with stock repurchases. With world Central Banks backstopping risk, with excess cash and pent up demand in a world of cheap credit it’s hard for us to reverse our 6 year stance of optimism in this cycle. How long will this up cycle last before the next recession and financial Bear market meltdown? Our assumption has been an 8 to 10 year up cycle such as the 1990’s and given the dearth of animal spirits and economic growth we would continue to expect a few more years tethered to evidence of overheating and much flatter yield curves. The longer term countdown to a peak may begin once the 10 Year treasury zooms past 3%, GDP achieves a full year of >4% growth and core inflation is well above 3%.

The peak in 10 year yields rising into the major economic peaks in 2000 and 2007 saw 50% increases in yield (from ~4 to ~6%) or just over 2 percentage point increase in rates. This implies that when the current rate rise trend inflates into our next economic peak we could see yields in the 2.6% to 3.9% range in a couple years. Given the pent up demand and excess liquidity many may expect an inflationary outburst and yields soaring well past 4%. Against the backdrop of a 34 year decline in interest rates since 1981 and the demographic and debt trends weighing down any recovery, we would expect the yield peak will be in the 3’s.

While our long term Bullishness maintains a 90% equity allocation, the medium term concerns remain for a potential 2nd quarter Spring peak and decline into the Fall. The forecast we have talked about since last year was for a reallocation hiccup once it’s confirmed interest rates have begun a secular rise. A 10 year yield of 2.3% to 2.6% may be the zone where rate-a-phobia hits equity markets.

Assuming this European recovery is real this time and the US rebounds further throughout 2015, we would expect a valuation adjustment  for a few months as earnings multiples shift lower. A clue we often repeat is watching for a breakout in the Yen carry trade that we have explained previously. The Yen has lost a third of its value in the past couple of years due to aggressive Quantitative Easing (central bank asset purchases). Along the way down the Yen has reassessed the results with 6 to 8 month trading ranges.  A similar new trend out of the current range should manifest over the next few months. Should the Japanese economy delay in showing strength, then the Yen should fall and rate differentials will again flood cash into US stocks. However, should Japan catch a breeze in exports due to a resurgent European marketplace, then favorable money flows into the US should ebb as the Yen rallies and US stocks correct temporarily. If the June SP closes under 2070 or June DJIA under 17,700 we may raise our cash allocation, but modestly, until the Yen breaks. New highs in the June SP >2120 and June Dow > 18,188 continues to confirm a “short term” breakout higher.

We will detail other commodities in  future reports for a longer term perspective not covered in our technical KDelta trading model we frequently publish. Here is a brief rundown of various markets.

Metals continue to carve out a long term base with one final surge to new lows possible under $1,000 Gold. We remain sidelined and will not Buy Gold in this 1130’s to 1330’s range. Seasonal lows are due this summer. The US Dollar correction we have expected for April/May continues until firmer signs of a sharp economic recovery from the 1st quarter appear. Grain markets are sideways to lower as we wade through favorable planting conditions and assess how our US supplies will be able to compete with the expanding Brazilian exports. Spec funds allow for a stronger rally later this year, but surplus supplies should hold prices down near term. For several months we said to expect a bottom in Crude Oil around February and a top in May in the $60’s potentially. The technicals are becoming overbought as expected and a further rally into the upper $60’s into the summer should provide significant resistance while production remains strong. An allocation shift toward Natural Gas exports from the US may help Nat Gas prices rise at the expense of Crude Oil through substitution by 2016. Natural Gas – UNG in stock brokerage accounts –  will remain a long term investment allocation. As for interest rates and the Treasury market it certainly appears that the bottom in yields is in and that rates will rise into the 2.5 to 3% range over the next 12 months. However, the technicals show resistance near today’s high in the 2.3’s%. It will take a major slowdown in Europe and the US to send our 10 Year Treasury rate back under 1.7%.

As the global economy attempts to get back in sync with simultaneous growth for the first time since 2010, commodities will eventually move into alignment for some inflation as well over the next year.

Disclaimer and Notice:  Nothing herein, including any attachments, should be construed as an offer to sell or as a solicitation of an offer, or a recommendation, to buy any interest in any investment or other product. This email may contain information on investments that are high risk and have substantial risk of principal loss.  It is for informational purposes only. Statements in this communication that are not statements of fact are merely opinions or forward looking statements from a potentially biased source(s) that involve known and unknown risks, uncertainties and other factors that could cause actual future results to differ materially from any prior or projected results. Statements in this communication may be inaccurate and/or unsuitable for you.  You must perform your own due diligence.  Your investment decisions should always be made based on your specific financial needs, suitability, objectives, goals, time horizon and risk tolerance.  Any decision is at your sole discretion and at your sole risk.  You are advised to consult with your individual investment and tax professionals before making any investment.  Past performance is no guarantee of future results.