Copper and Oil are important barometers of economic direction. The weather vane for Copper’s direction isn’t as much supply, but demand. Chinese industrial activity and the commitment of traders are important demand side tells to observe.

When Copper surged an impressive 10 cents a pound last week it was blamed on the possible partial strike coming at the worlds 2nd largest mine – Grasberg. Yet this supply side news was old news with no merit other than cover for Fund managers to manipulate price and run futures price buy stops. The next couple of days prices more than retraced, falling almost 20 cents or 5% on the excuse that inventory levels rose. This was also a ruse since inventory changes have been benign for months. Looking at the micro, there was a relatively large one week inventory spike which fed the copper price decline, but when inventories were at these levels in the 4th quarter of 2016 prices were rising. 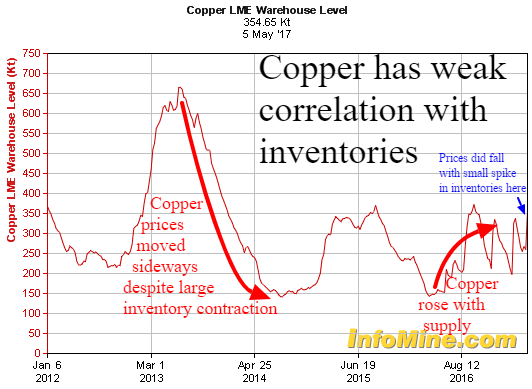 One of the more important demand side elements we often point to are the fund flows represented by the commitment of trader positions in the futures market. When Large Specs or Managed Money funds reach extreme net long holdings of Copper, hedging for higher prices, we look for signs of a top. From November 2016 to through this past February it was clear Copper funds had reached extreme levels of optimism on price. Sucking so much of the buying potential out of investment funds with these record net long Copper holdings made Copper vulnerable. Once the major strikes subsided and the economy cooled Copper fell over 10% from its February peak. This market has been in need of speculative long liquidation before Copper prices could find a bottom. Over the past 3 months about 60,000 Managed Money fund contracts have been reduced. While our ideal buy zone requires another 40,000 to 80,000 contract liquidation, Copper can work into a bottoming formation in the $2.30’s – 2.40’s without reaching such extremes.

Another key tell for Copper has been the manufacturing trends in China. As the worlds largest consumer, China significantly affects the global supply and demand balance. Copper will even stay tethered to merely the perception of Chinese economic activity. Since 2011 when Copper prices began to unravel, the Chinese manufacturing purchasing managers index (PMI) has been a roller-coaster ride around the unchanged level. When Chinese PMI enters contraction mode  under 50, industrial metal prices will accelerate to the downside. When their PMI entered the expansion mode during the 4th quarter of 2016, Copper prices surged on the expectations of increased consumption. When Markit last week reported China’s latest PMI falling perilously close to contraction mode near 50, Copper prices fell sharply from $2.69 to $2.47 (8%) over the past 6 days. 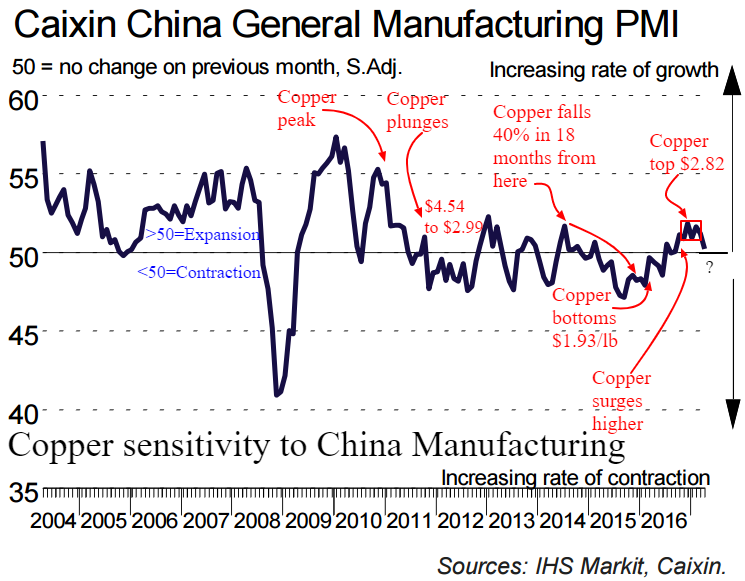 Technically this Bull Market in Copper and base metals could risk failure if we move under the support zone we highlight in the $2.30’s to $2.40’s. It’s easy to see the correlation of major price moves with the movement of managed money flows and Chinese PMI trends, thus further fund liquidation of over 40,000 contracts or a China Manufacturing PMI reading under 50 would increase the odds of breaking our key technical support zone. A movement in Copper under $2.30 toward the 2016 lows near $2.00 would be a bad omen for the global recovery which has gained in confidence over the past year. Given our outlook for continued global growth, we would favor renewed signs of economic acceleration from the US in the 2nd quarter and “eventually” China by the 2nd half of 2017 to keep commodity prices from falling too far.