It’s great news that our US economy (GDP) grew a better than expected 2.1 percent in the 2nd quarter. It’s a far cry from the 3 to 5 percent Trump expects and the fluke 3.1 percent in the 1st quarter, but it’s also a long way from the recession expectations of many economists for this year or 2020. The tale of two economies has become more stark this year as a happy consumer added almost 3 percentage points to the GDP last quarter while contracting business investment and exports erased over a percent. Consumer balance sheets remain healthy and consumer credit and loan defaults are low and job openings remain near record highs. The consumer is expected to continue consuming at high rates preventing a recession over the next year.

The much smaller industrial portion of the economy here and around the globe has been decelerating or contracting for the past several quarters with no end in sight as long as the China trade war persists. Several of the regional Federal Reserve Districts along with the important Chicago Manufacturing Purchasing Managers Index (PMI) are in contraction territory with 80 percent of businesses surveyed claiming the China tariffs are reducing new orders. The national Markit PMI report indicates a healthy but decelerating Service sector and a manufacturing sector with zero growth. 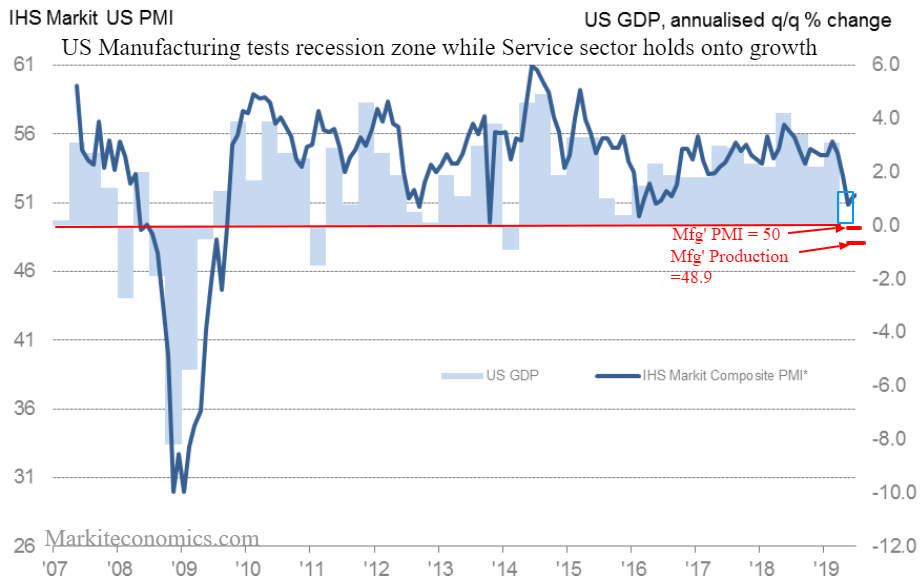 The hope in the bipartisan supported Trade War with China has been that tariffs would hurt their economy more than ours and bring them to the negotiating table for significant concessions to our demands. We are certain China’s GDP numbers are fictitious, but their PMI and other component data are based in reality. What we see is a Chinese economy that is not hurting nearly as much as Trump and the media claim. Chinese manufacturing is contracting again, similar to the US and Europe, but their Service and consumer oriented sectors are still growing as strong as ours. This perspective is further buoyed by the strong growth in Chinese electricity and cement production that show no sign of an economic slowdown as the US had hoped. If Trump wants to exert more leverage he may need much stronger action than he’s applied to date. The next couple of weeks may be very significant in determining if we will see the good cop or bad cop by the US and if the Chinese will keep running out the clock into next years election. 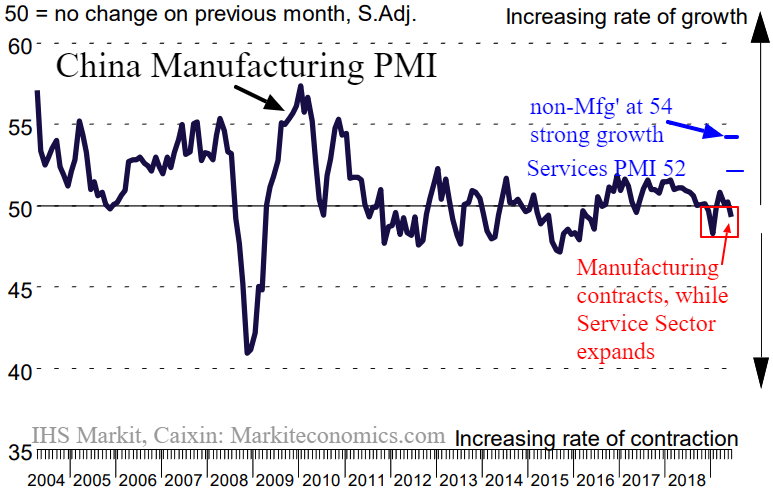 The important Eurozone, led by Germany, is in a clear and persistent manufacturing contraction that is ameliorated by decelerating but healthy growth in consumer spending. The concern we have is that a persistent industrial contraction and pessimism may eventually seep into the service sector if manufacturing layoffs begin. One factor helping all the industrialized economies has been the aging demographics that has kept labor in tight supply, reducing the odds of derailing euphoric sentiment and spending habits due to rising unemployment claims. If the trade war escalated much further, this ebullient consumer attitude may shift lower. 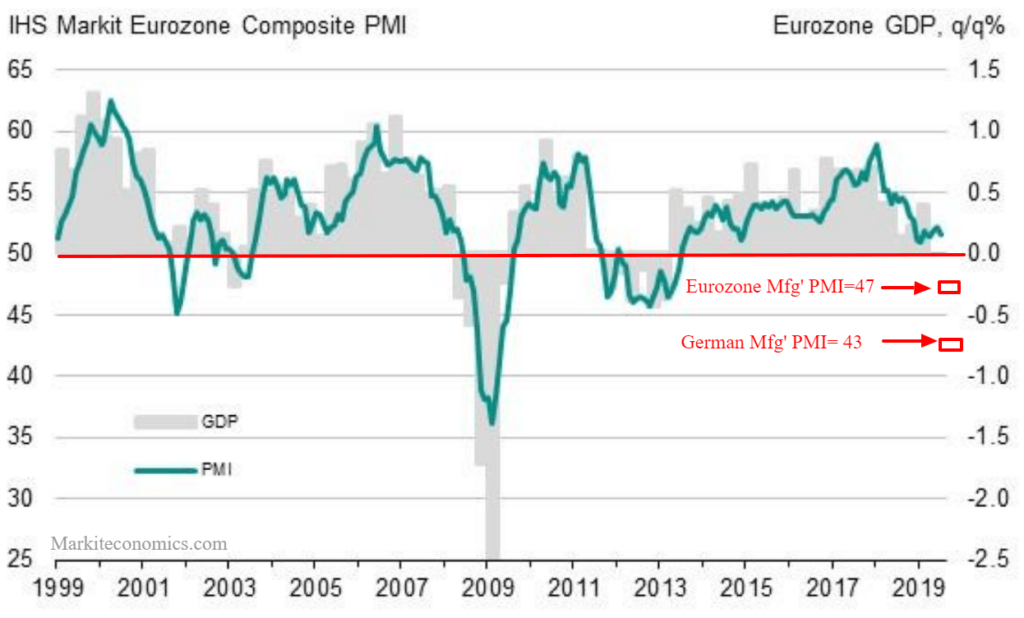 While interest rate cuts around the globe have supported Bullish stock market sentiment, there remain few positive economic catalysts on the horizon, other than Trade War resolutions, needed to send GDP growth rates back to their 2017 and 2018 peaks. The US and Chinese economies are holding onto modest growth with neither side seeing the pronounced weakness that would give one side more decisive leverage in these critical trade negotiations. We continue to expect the final 3 quarters of 2019 to average near 2 percent, held up entirely by consumer expenditures that comprise almost 70 percent of our economy.