Within 15 years the western world entitlement tsunami enlarged by aging demographics should swamp the global economy during a deeper than normal cyclical contraction, but the tea leaves guiding current economic cycles can be simplified  by focusing upon raw commodity prices.  Prosperity and growth will generally stagnate or contract as long as commodity prices are in secular deflation reflecting an excess of supply relative to consumption. Commodity prices completed a major 18  month collapse bottoming in the 1st quarter 2016 coinciding with a momentum reversal in the global economy as well. The dead cat bounce into the summer has stalled. Money flows await signs of a new leg up before investing capital for a more sustainable expansion. While inventory restocking and better exports indicate near term growth, commodity prices  need to break above 25 (DJP) to sustain growth. When commodity prices break either support or resistance as shown below, the odds are high that the economy and stock market will move in sympathy. We forecast that commodity prices will breakout to the upside in 2017. 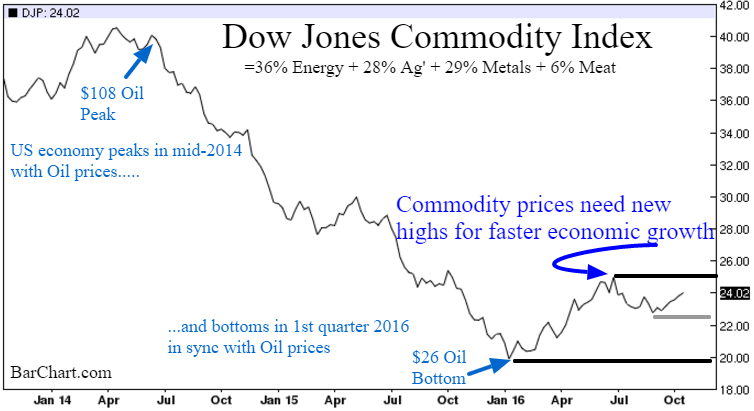 Commodity price indices and economic momentum have mirrored the movement of  Oil with clear resistance near $52 a barrel. Overbought Managed Money holdings, rising Oil inventories and failed attempts by Saudi Arabia to cut OPEC production have quickly deflated prices from $52 to $45 this week. US Oil stockpiles reported this week grew a much larger than expected 14.4 Million barrels causing prices to fall accelerate lower. Over a year ago we forecasted a 1st quarter 2016 Oil price bottom near $30 followed by a higher trading range. Despite many experts forecasting $60 oil by year end 2016, we still think such levels will need another 6 to 12 months to achieve. A move over $52 a barrel WTI Crude Oil should confirm another leg up has begun and commodity prices in general will break out.  New multi-month highs in the Commodity Index would be a positive sign for the economy and earnings, but no signal from crude yet. The good news is that even if Oil remains in the 40’s it will turn the severe economic and corporate earnings headwind of 2015-2016 into a modest tailwind in 2017. 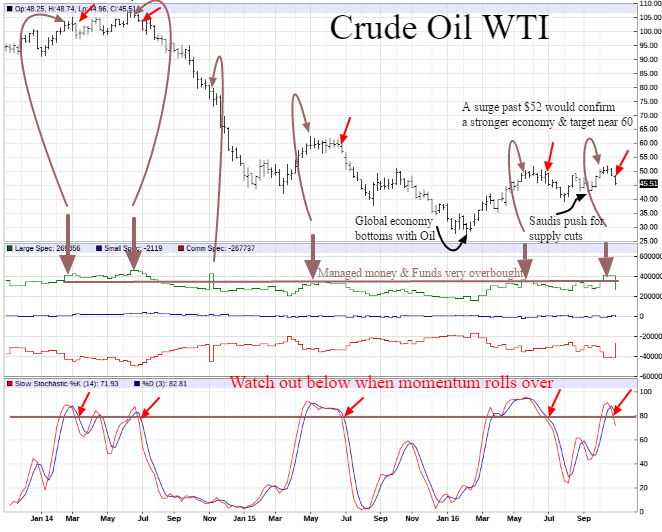 It’s encouraging that minor metals such as Zinc, Lead, Tin, Cobalt and others have recovered strongly. However, Copper is the canary we want to watch for signs of a sustained growth phase in the global industrial economy. Like most metals, Copper has been building an important base since January. A break lower would portend renewed weakness in the world manufacturing sector. We expect metals to break higher and finally confirm that the energy recession is over and a period where manufacturing can finally increase capital expenditures. While copper production will grow 4 to 5% in 2017, rising consumption rates from China and India should keep inventories low and support prices. Key resistance to confirm a stronger economy is a price above $2.32 (~$2.22 currently). 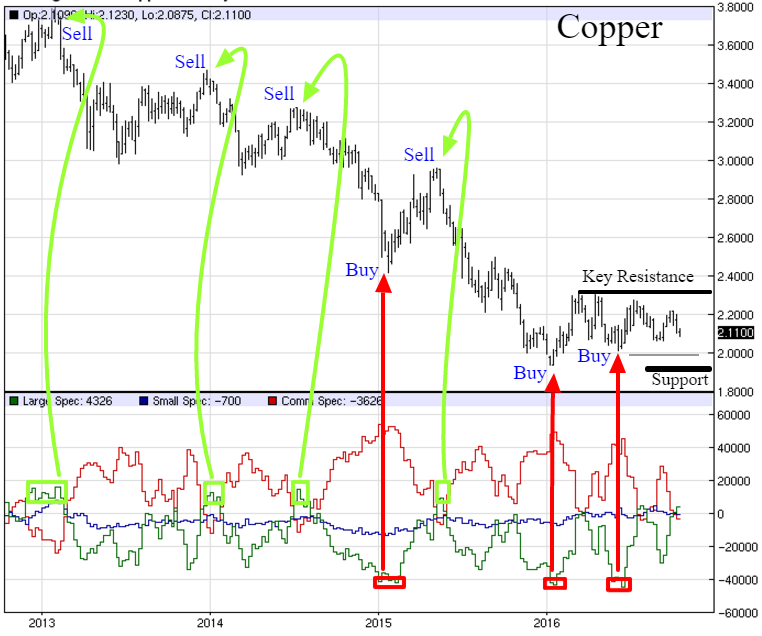 Iron Ore, Nickel and Aluminum are minor metals that paint a similar picture as Copper. They have also stalled after bouncing earlier this year and need a break higher to signal a more sustained trend in demand and an acceleration in global manufacturing. One potential impediment to a move higher is the concern over new iron ore supplies coming online soon from Brazil and Australia. Demand for steel will have to grow and China will need to shrink its stockpiles in order to avoid a breakdown here. 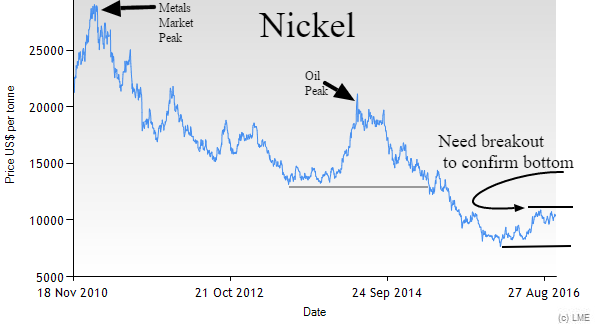 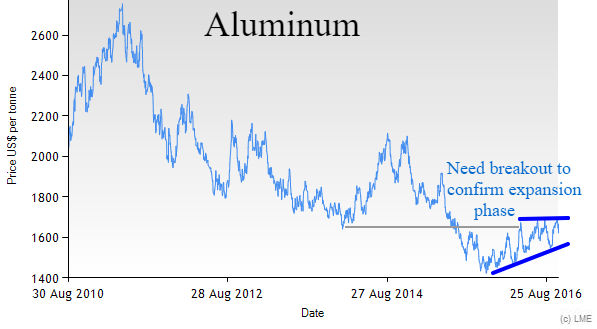 After more than 4 years of deflation in the industrial metals sector we are seeing the strongest cyclical rebound since 2009 from the metals complex. 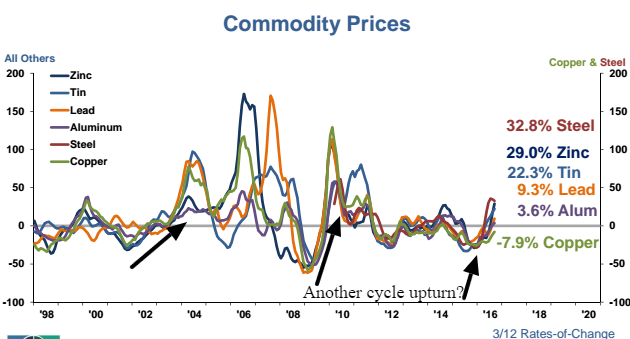 Is There a Bull In The China Shop?

Chinese consumption and overproduction was an enormous part of the 2009-2011 global recovery. Falling Chinese consumption was also a major factor in the recent period of global economic stagnation since 2015. Now it appears that economic activity in Asian ports is heating up. 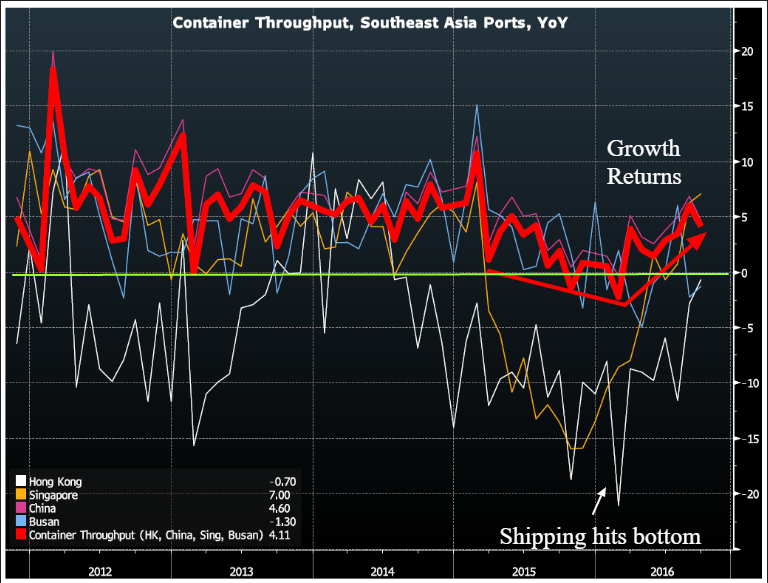 Manufacturers pricing pressure has switched to inflation after 4 years of deflation hinting that supply and demand are ore in balance. 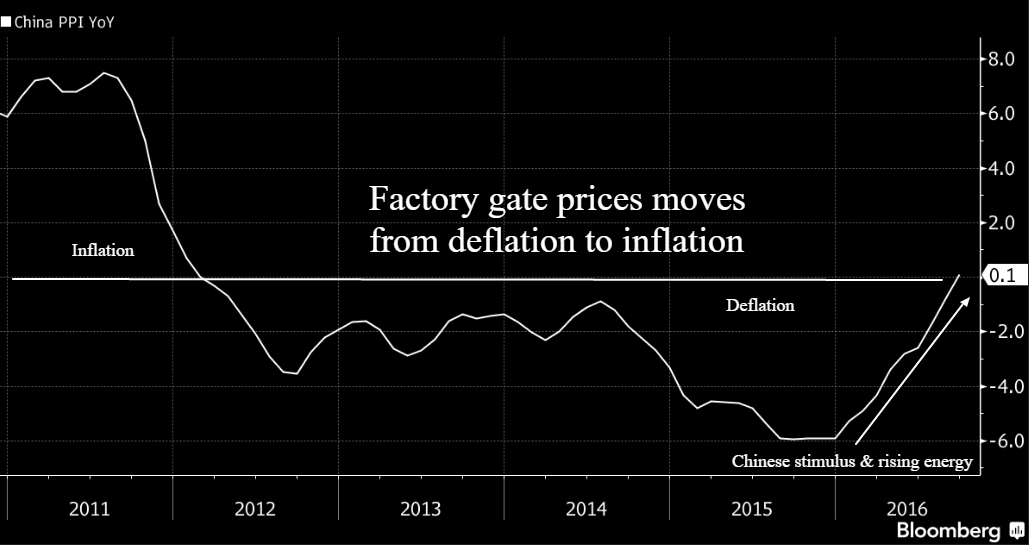 Brazil suffered a mild Depression for the past 2 years, but now appears headed towards growth in 2017. Like the energy sector this would turn the critical emerging market headwinds into tailwinds going forward.

Europe, led by Germany, is now  displaying the strongest future market conditions in over 5 years. Strength in New Orders and backlogs hints that economic conditions are improving.

The buoyant Service sector  (79% of US economy) was hurt by the energy sector recession. In October it appears that growth has rebounded.

In 2015 and much of 2016 economists were consistently surprised by the weakness in economic data as shown here by the Economic Surprise Index. Most economists underestimated the negative multiplier of the petroleum recession on the service and manufacturing sectors. Recently the data has been stronger than most forecast as few expected the inventory investment and export growth to rebound in September and October. It’s early, but the recession fears earlier this year have subsided for now and consensus growth forecasts may begin to rise.

In conclusion, we have shown a positive base building in the leading economic indicators (LEI) of commodity prices led by Oil and the industrial metals. Further we have run through recent signs of renewed economic growth for a possible LEI breakout with a rare unity of global economic engines in China, Europe, US and Emerging markets. Uncertainty of an untainted US President elect, A Fed rate hike in December and Brexit repercussions into March could cap near term enthusiasm. The truth will become apparent in 2017, but the signs are encouraging that a recession is still not in the forecast for the next couple of years without some exogenous event.

Too Many Tired Bulls