No China Pain, No Trade Gain

May 30, 2019 China, Newsletter, Speculator, Stock Market, US Economy No Comments
0

While the “No Pain, No Gain” fitness mantra has been somewhat debunked, it may hold true with regards to Trump achieving an all encompassing Trade Agreement with China. Throughout the first 4 months of 2019, confidence in a first half of the year China trade deal soared along with stock investor portfolios. Suddenly, in early May, a trade deal Trump and the investor universe perceived within its grasp vanished. Now Trump is doubling down on the China pain equals trade gain game-plan upsetting complacent stock market investors. As the clock ticks down before the sensitive Presidential campaign season kicks off in early 2020, President Trump has to pull out the stops to hurt Chinese businesses and stocks without major storm damage on the home front. The current gamesmanship, where Trump declares the US is booming while China is in economic pain, is more fiction than fact. Such exaggerated rhetoric may be to calm US investors, but the real fear and pain he seeks to inflict has yet to impact China significantly. The main tools at Trump’s disposal are tariffs, sanctions and fear. When US steel tariffs kicked in a year ago the Yuan depreciated sharply, which reduced the effectiveness of tariffs with cheaper Chinese export prices. The Yuan had been rallying in 2019 as a trade agreement seemed imminent, but their currency plunged once again in recent weeks as the alleged deal was called off and the trade battle heated up. The changing value of the Chinese currency unit (Yuan) has been a barometer of the US and China trade war direction. The fear over capital outflows thus far are mild and with $3 Trillion in reserves, China has plenty of monetary firepower to control its currency at a lower valuation range to minimize outflows and export trade barriers. Look for President Xi Jinping of China to keep the Yuan near 7 to the Dollar or 0.143 Dollars per Yuan Renminbi, with a range of 0.140 to 0.147. Should positive trade talk resume, the Yuan will rally. 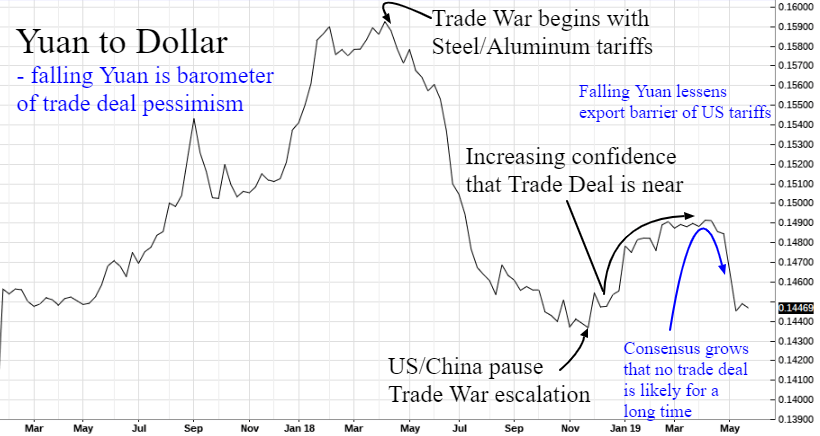 While money inflows into US stock index ETF’s continued to rise recently, investor capital is leaving China ETF’s as the majority assumes the US wins a protracted trade war. However, Chinese stocks have yet to plunge to their 2018 lows where some pain would be felt.

The broad based Shanghai index is holding on better than the important Large Cap stocks (FXI) which are closing in on two year lows, led by the collapse of former market leaders Baidu and China Petroleum. Yet both indices may need much lower prices before sentiment is depressed enough to encourage trade negotiations. 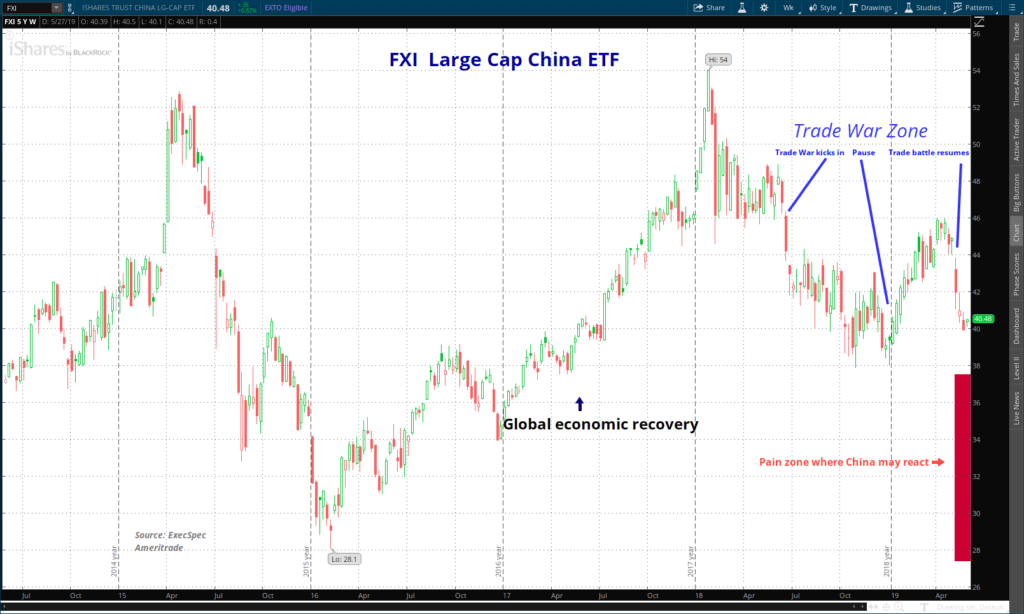 Signs of pain in China have popped up over the past year, such as slowing consumption and production growth along with a decline in their stock market. However, the service sector as well as consumer and business surveys convey a level of optimism and growth that indicates a cushion with which China can risk an escalation of the ongoing trade battle with the US.  The most recent metrics reflect peak 2019 ebullience prior to the recent severing of trade negotiations and the new round of trade related attacks. Trump needs to see the China Purchasing Managers Composite reading fall into contraction territory to raise his leverage with President Xi. 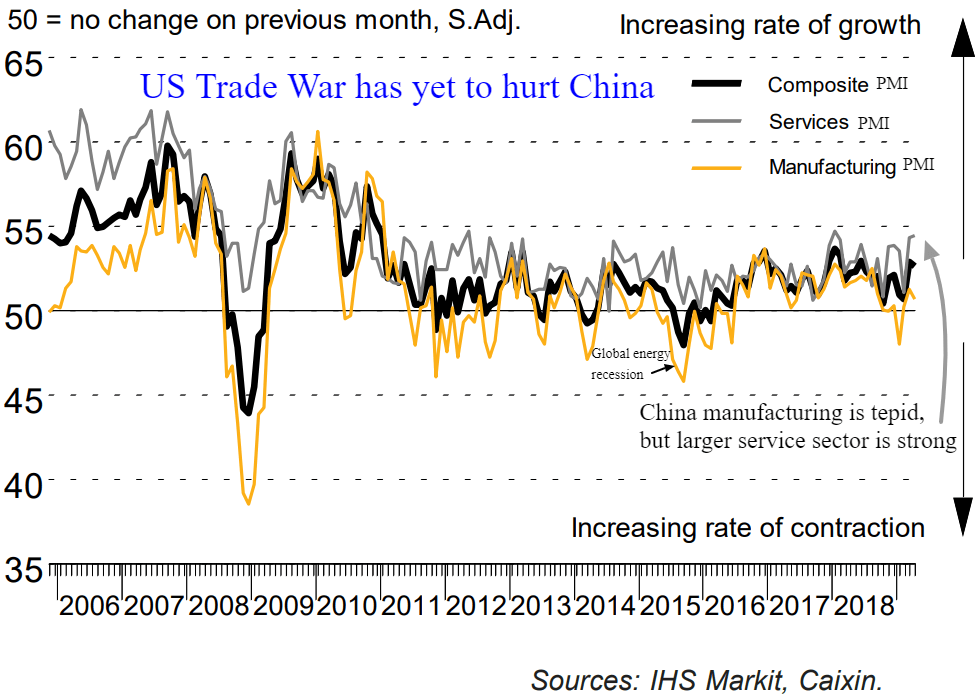 We suspect there has been an abrupt mood change in China and the US from confident optimism to indefinite pessimism during May that will cause delayed reporting of economic data to take a sharp turn lower as reports come out over the next few weeks. This expectation has already sent stocks lower in both countries. While stock markets will likely reach strong oversold levels soon after any new leg lower, such a down move may be required in order to trigger pain thresholds leading to a new impetus for substantive trade discussions. Any hint of  China and US negotiations will put an immediate floor under their respective stock markets, yet we expect Trump and Xi to risk firing more economic weapons at China over the summer, making lower stock prices somewhat self fulfilling. Investors should expect Trump will continue banning or sanctioning companies, adding tariffs and pushing for more permanent relocation of production facilities out of China. For the consensus expecting help from a Fed rate cut, our Federal Reserve will not cut the Fed Funds rate until the US economy slows significantly. Similar to our economic pain equals trade gain mantra, our Fed and authorities in China will not be compelled to act until there is more economic pain being felt. Currently Europe, Japan and emerging markets are being economically impaired by this trade war, but ironically the US and China have remained the healthiest fish in the pond. For stock market investors the best case scenario is a sideways market in the upper 2600’s to low 2800’s basis the SP 500 Index until the US and China begin talking and move closer to a trade agreement. We favor a continuation of this 10 year Bull market in stocks longer term with favorable odds for gains in the later part of 2019 as stocks climb the proverbial wall of worry, but near term risk prevents sustained rallies until a more painful climax is reached.