The Trump – China trade dispute, peak profit margins and downward earnings growth forecasts will keep stock prices on the defensive in the months ahead. The equity Bull market can be sustained and a recession avoided in 2019, however it will require a resolution on the trade front and likely further US and global economic slowing first. The Global recovery turned up on cue with Trump’s election and has turned south upon his planned trade war threats and implementation.

China’s economic growth rate slowed mildly during the first half of 2018 on concerns over trade and an effort to tighten excessive credit, but activity has profoundly declined recently as the trade war threats become reality. Our view last summer was that Trump wanted China to slow before considering a deal and he will continue to hold out for major concessions even if stocks and the hot US economy work lower. 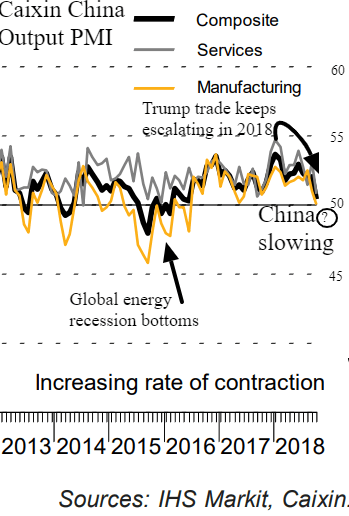 Outstanding US-Euro trade disputes and financial woes in Southern Europe have plagued the Eurozone, but the US – China impasse adds to their troubles. A Hard Brexit (no Euro-UK deal) is also likely next March that will require new stimulus efforts to counter the potential for a UK contraction. 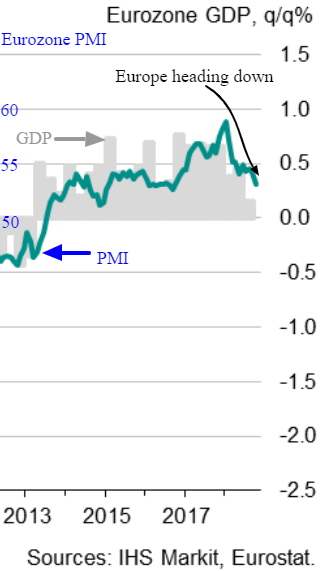 While Trump helped boost global economies and stock markets in 2017, he’s played his Tax Trump Card in 2018 allowing the US to accelerate while the rest of the world slides lower. The US can remain the only clean shirt in the world for only so long before the effect of reduced global trade counters the massive US tax cut, repatriation and factory reshoring stimulus. Manufacturing is still very strong in the US, but orders are slowing and a PMI breaking down into the lower 50’s will confirm a US economic pause. The good news is that supplier deliveries remain extremely constrained, in need of slower growth to normalize supply chains. If Trump plays his cards right creating a whiff of disinflation, lower interest rates and a GDP in the 2’s in early 2019 and then securing a China trade deal, he can skate around potential recession fears and score another growth phase victory later next year.

There is no hint of a recession on the horizon, but such talk along with sub 3% 10 year yields may be required in 2019 along with new China-Euro-US trade agreements before a new up wave lifts all boats and stock prices. For now, until these conditions materialize we would expect sideways to lower stock prices in the months ahead with some echoes of 2015’s pattern. Short term, with the markets awaiting the key US – China trade talks in early December, it seems likely stocks will trade sideways to higher in November, unless the Democrats control the Senate or China/US call off the expected trade meeting.

Where in the World is R* and Phillips Curve Inflation?

Where in the World is R* and Phillips Curve Inflation?
Ready to start creating financial success? START YOUR FREE TRIAL