The larger service economy recovered years ago and remains strong, while the manufacturing world has only confirmed exceptional expansion rates over the the past year. The latest ISM Manufacturing Purchasing Managers Index (PMI) test of 61 is impressive and usually occurs in the early to middle innings of a new economic expansion following a recession. With low inflation, this new post election industrial surge is a good omen for the next couple of years and is being mirrored in Europe and to a lesser degree in Japan.

When Oil was pushing above $110 in 2014 the global economy was on the verge of breaking out, but recoiled as the excess Oil production glut and ensuing energy recession curtailed the building momentum. This time the industrial up cycle appears even warmer than in 2014 and 2010 as optimism pushes toward record levels.

Drilling down further from the national ISM PMI data to the individual Federal Reserve Districts we can see specific aspects of strength. The Richmond Federal Reserve District report last week mirrors most parts of the US, revealing surging production and order demand that is severely straining supply chains and delaying deliveries. Unfilled orders are piling up as resource capacity limits the speed of desired growth rates. This is also a major factor limiting the economic growth rate and sustainability that Trump expects.

Along with decade highs in manufacturing activity we see extremely tight labor markets and rising wages. Bolstering this trend is the all time record population adjusted jobless claims and record unfilled jobs data that bolsters the hot labor market. Don’t be surprised if the current warm level of 2.9% wage inflation jumps a bit more in coming months pushing the 10 Year yield to just over 3%.

Our personal ExecSpec partnership supplying large machines around the world echoes the charts above as we experience record backlogs, slowing shipment dates and a severe scarcity of workers of all skill levels. About 12 months ago our machine manufacturing operation experienced the first dramatic order surge in a decade that has resulted in labor shortages along with constrained supply chain logistics that appears certain to remain an ongoing challenge in 2018 and beyond. Typically our personal expansion cycle surges last 3 to 4 years before hitting a wall. This targets ~2020, but signs of overheating will fine tune such forecasts over the next couple of years.

While the above headline is widely disseminated and politically twisted unethically out of context, we assume the new Trump Tariffs proposed on Aluminum and Steel imports are a “fait accompli”. Will they derail the robust economic picture outlined above through higher inflation and interest rates?  Will new Trump tariffs cause a “beggar thy neighbor” 1930’s style Depression? Our bet is essentially no, even though the tiny inflationary inputs caused by this action can keep escalating and interest rates naturally rise during economic expansions. The Trade War Poker game has begun. When Europe threatened to retaliate with tariffs on US cars, Trump quickly responded he would mirror their moves. Despite the sharp longer term decline in US Steel manufacturing, the domestic Steel industry market share has been rising recently as the import market share has fallen to 22%. 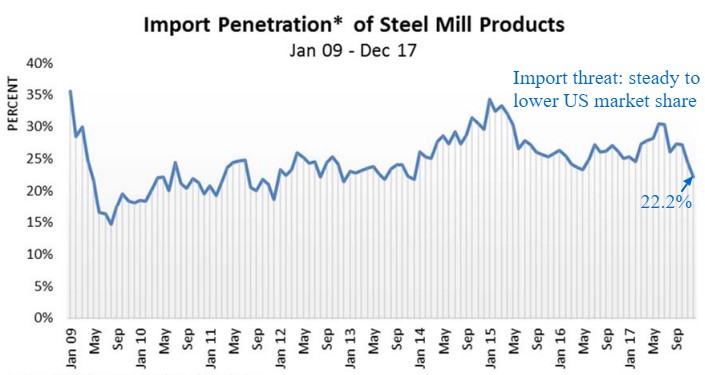 While the Aluminum industry may already be hopeless, relying upon imports for 90% of usage as 83% of our smelters closed in recent years, Steel appears to have been more competitive despite illegal foreign dumping as US Steel Industry profits rebounded sharply in 2017. 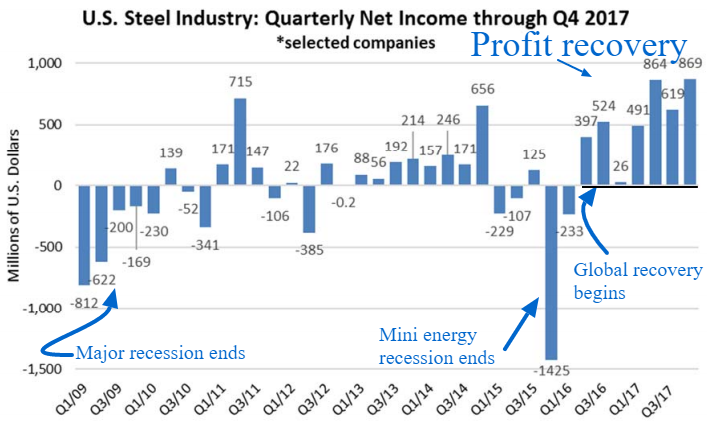 The Trump tariffs were part of a campaign promise and should surprise nobody who is paying attention. The Trump Trade tirade is “certain” to continue, so buckle up! The US has a $375 Billion annual trade deficit with China, $70 Billion with Mexico and over $566 Billion deficit globally. China engages in a massive amount of non-tariff trade violations restricting US imports. These include Trade Secrets, Counterfeiting, Trademark and Patent infringement, Piracy and quotas. We still expect Intellectual Property (>38% of US GDP) punishment of China this summer. People need to understand that Trump ran on a populist platform that is America First. We should remember that most of his actions are an attempt to build America up through (1) cutting corporate tax cuts cuts making America more competitive and attractive place to operate, (2) deregulation to reduce red tape costs and permanent restrictions to investing and operating, (3) forcing NAFTA to reduce US trade deficits, (4) incentivise US corporate repatriation of overseas trillions back to domestic investments, (5) restricting use of foreign or illegal labor on US soil as well as (6) tariff and non-tariff barriers on imports to the US. For now consumer and business optimism remains at extremely optimistic levels.

With the half a trillion annual trade deficit and accumulated $9.6 Trillion deficit since the year 2000, Trump is echoing populist thinking that the US has leverage to make better deals – that foreign countries have more to lose than the US. Of course an escalation of this mentality by the major countries has the danger of mimicking President Hoover’s Smoot-Hawley protectionist measures that spread trade barriers around the world and contributed to a global depression. It’s far too early to assume that anything close to the 1930’s extreme is written in stone. China may buy less Tofu and Europe fewer Harley motorcycles, but the Equity markets around the world have remained surprisingly unperturbed by the escalating rhetoric of our mercurial leader or from counter threats by our major trading partners. We continue to expect Trade War actions and rhetoric to intensify this year, but we maintain a positive outlook for the next couple of years along with our forecasted first quarter 2018 correction.  The stock markets response to negative news over the past 5 weeks bodes well for the psychological health of equities. Technically stock markets are waiting for strong earnings to catch up to even stronger stock price appreciation (S&P 500 P/E ratio = 25.4). Fundamentally markets are waiting for clarity on rising inflation, interest rates and protectionist trends. The current market pause in a strong economic but richly valued environment requires investor patience waiting for those 5% to 10% increments lower, as we had in early February and early March, to Buy stocks.