Too Many Tired Bulls

When US stocks broke to new record highs in July we began to see excessive optimism creeping into the indices. In August and September we warned that a top was forming and lower prices into October were likely. We would extend that corrective phase into November-December given the continued Call option speculation by investors.

A modest 4% correction has ensued from the August peak into mid October. We expect sideways to lower prices into November and possibly December before Put option hedging arrives with oversold conditions that are conducive for a more sustainable leg to new record highs.

The shorter term trader sentiment we highlight above indicating a need for more pessimism runs counter to the narrative of many analysts who continually point out the wall of worry and rising cash levels. This week it was reported that money managers have increased their idle cash holdings to 5.8% – the highest in almost 15 years. While it’s true that increased hedging and elevated investor cash on the sidelines is a Bullish undercurrent, we would note that past spikes in cash and hedging activities were in response to panic over a Global Bond market default and interest rate hikes that sometimes coincided with stock market bottoms. This time we have stocks near record highs with fixed income – Bond – investors raising cash. Nonetheless this may still be a positive “tail wind” for stocks in 2017, but it doesn’t preclude a further stock market correction over the next month or two as investors switch their optimistic Call option hedges to more fearful Put options that are typical before new money can propel stocks to record highs once again. 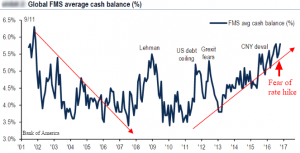 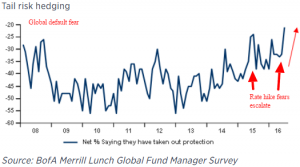 The big picture headwinds are strong for stocks at this juncture.

2. Construction spending is weak. A return to 1% growth would be a good sign.

3. Purchasing Managers and Industrial Output are stagnant. Both Services and Manufacturing bottomed in early 2016, but have yet to sustain expanding growth rates. We also called for a mid-cycle 2016 low, but acceleration is unlikely until 2017. Presidential election anxiety and rate hike fears should climax over the next month. 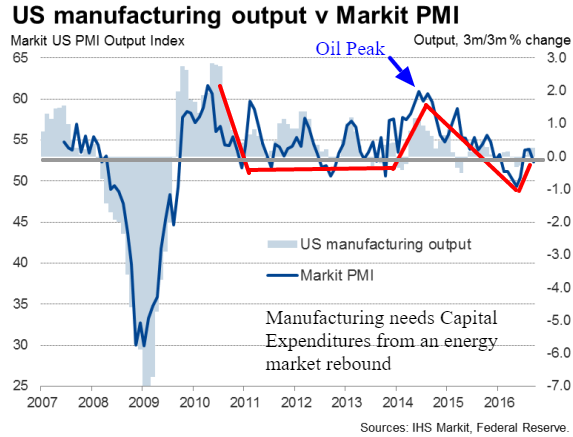 4. Earnings are weak along with rapidly falling GDP estimates for the 3rd quarter. The Atlanta Federal Reserve GDP Now forecast as well as a consensus of economists have egregiously over forecasted this 3rd quarter from a robust 3+% to 2% and falling. We thought a rebound in inventories would allow for modest 2% growth, but even that looks questionable.

5. Even retail sales are bordering on recession levels should they weaken further. This recovery has been sustained by the credit card of consumers that have been showing increasing signs of fatigue the past 2 years. The recent $26 Billion August surge in consumer credit could auger well for a renewed spending  spree.

The Fed will also hike rates in December which is another few degrees of headwind to worry Bond and Stock investors. So with all these powerful headwinds why should we maintain only a short term Bearish outlook with a renewed growth cycle evolving in the first half of 2017?

Thus far the Industrial metals and energy markets have bottomed and excess inventories are peaking. Earnings have remained below their peak for 6 straight quarters almost entirely weighed down by the energy sector. The S&P 500 Stock Index Energy sector is expected to show a whopping -72.5% year over year decline in earnings. However, extremely favorable comparisons in 2017 and possibly 2018 in energy will lead all others in revenue and earnings “growth” providing a significant psychological tailwind to the economy and market valuations. Additionally there are signs that Europe, US, China and emerging markets will be in sync economically for the first time in many years that should ensure a new trend in oil and industrial metals inventory reduction from current extreme surplus conditions. 2019 to 2020 may see a recession, but the next couple of years should be more positive than the last two years of an Oil triggered 2014-2016 Capital Expenditure recession.