They say Bull Markets climb a wall of worry. Of course concerns will always be present,but all worries to date have been papered over by the super charged atmosphere of $4.1 Trillion in Central Bank money creation (asset purchases) and Government handouts totalling $5.3 Trillion (with several Trillion more pending). These monetary and fiscal emergency injections will continue despite a booming economy. Understandably, assets are inflated as investors speculate that consumption will continue to outstrip supply. The benchmark of US stocks, the SP 500 Index, has registered a new all time record high 54 times this year while reaching almost 200% gains since the March 2020 pandemic low. The consensus is that this market is overbought or at least overdue for a normal 10+% correction that has recently been heightened by an expected seasonality swoon during the September – October period. Consensus also anticipates this Bull market to continue and the longer stocks go without a scary decline, pent up demand grows more anxious to buy ever smaller dips. Personal savings are still about half a Trillion above normal with more Depression level handouts being promised in the months to come. Shorter hope for some investors to plow more cash into the market focuses upon the consistent periods of seasonal weakness in stocks, from mid February into a March low and from mid September into an October low. Our amalgamation of seasonal patterns (dashed blue line below) have correlated well with many inflection points this year. If they are accurate again this month, then we should see peaks in early and mid September that give way to more persistent weakness into an important low in early or late October. As our short term KDelta stock market updates (excerpts shown below) have indicated, we have been expecting the market to peak last week with a modest decline into the 10th to 13th. Over the past year it has been rare to witness more than a 3% drop or more than 4 or 5 days down, which is about where we reside today. The 50 day moving average in the S&P is key short term support that has successfully held all 8 tests this year and resides just 1% further down from here. Should stocks continue lower and close under their 50 day moving average of support (purple and red lines below), then the potential low due in October could test the 200 day moving average and 10% correction levels that coincide just under 4100 basis the SP 500 Index.

While the Bull market should continue into early 2022, we will note a few more cracks short term during September. Our proprietary signals of divergence and exhaustion have come together this past week to indicate at least near term trouble. After 4 straight days down, these warnings have been partially justified. 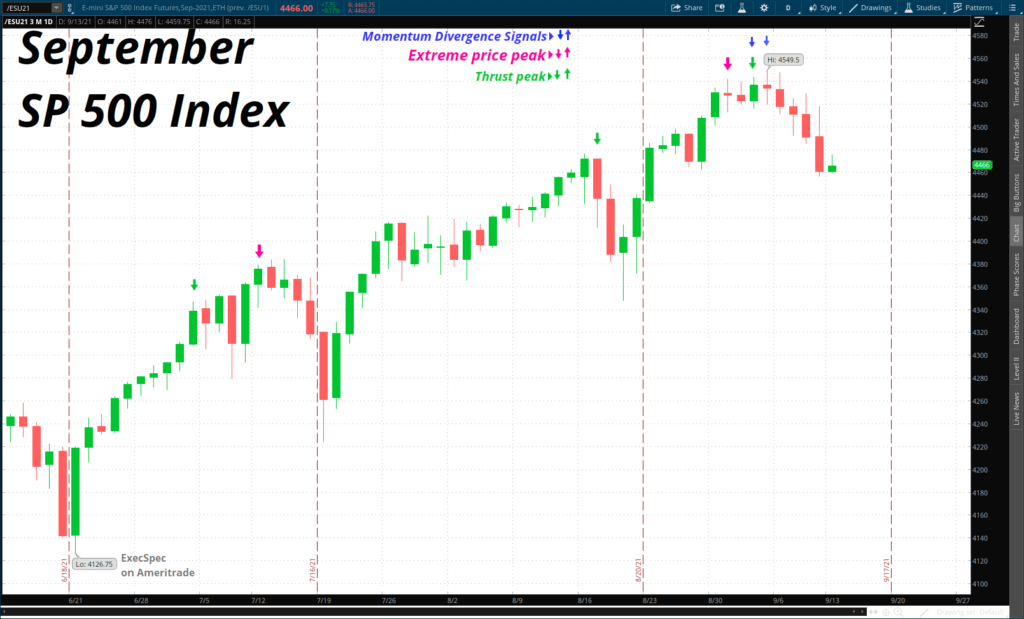 Another reason for caution over the next month or two comes from the New York Stock Exchange (NYSE) cumulative advancing – declining stocks line. This popular measure of market breadth, contrasted against the mainstream SP 500 Index, shows significant negative divergence. The potential flaw in using the NYSE AD indicator in this Bull market is that the old NYSE lacks the technology exposure which has far and away dominated the most popular SP and Nasdaq indices since March 2020. However, it also illustrates that the common troops (NYSE) at times wander away from the SP’s domineering large cap technology generals. The previous 2 negative divergence readings over the past 2 years occurred in mid to late February 2020 prior to the Covid crash and in late August to early September 2020 that led to a 10% correction.

Our core sentiment based indicators (shown below) may lack consensus, but show surprising frequency of moderate oversold readings over the past 18 months despite the non-stop Bull market rally. Should 2 or 3 of these lines cross into the Oversold zone, as we would expect in the next few weeks, then we would fade downside hedges and increase our Bull market posture.

As the vaccine development progressed from final trials last year to mass injections into May of this year, the market leaders were small cap, travel and reopening companies. However, the Covid mutations that flared up in late Spring and Summer have now triggered a wave of travel cancellaltions due to Government mobility restrictions and mandates. This has shifted large cap and technology companies back into the winners circle. Technology will continue to dominate this Bull market until the elusive solution to Covid spreading is found that allows the US and world economy to finally reopen. It appears that the current Covid Delta wave has rolled over, but the lagging effect of restrictive mandates and a healthy dose of Government fostered fear may prevent travel and reopening stocks from reaching their May peaks for at least a few more months. After 20 to 30% Travel stock corrections, they should be more buoyant as the Delta variant fades. We have remained long term Bullish, but suspect this Bull market will run into trouble in 2022. Earnings comparisons next Spring and Summer, Fed reduction of asset purchases this Winter and a “Sell the News” impetus upon passage (or failure to pass) the last Fiscal stimulus package within the next few months should collectively bring personal savings down to normal levels with a sharp decline in consumer demand later in 2022. These will trigger a steady drop in GDP and forward earnings multiples that are already filtering into mainstream forecast models. Risk levels have risen this month and will rise more in 2022, but there will continue to be sector rotation and opportunities to invest during periodic setbacks, especially if the pandemic panic can be neutralized.