Understandably the commodity oriented Brazilian economy has a close connection between its currency and the crops it grows. Sugar, Coffee, Cocoa and to a lesser extent Soybeans and Orange Juice all have some correlation with the Brazilian economy and its currency – the “Real”.  When commodities in general peaked in 2011, so too did the Brazilian economy and the Real. Sugar and virtually all commodities devalued with the emerging market sector deterioration until 2016. The emerging markets and Brazil have been moving from an almost Depression in 2015 to break-even in 2016 and much of 2017 and are now in expansion mode. This bodes well for the Real and by extension Sugar and other domestic crops it dominates.

Zooming in shorter term we continue to see some of the Sugar – Real correlation with a very notable divergence in recent weeks as a major Brazilian court decision approached regarding convicted ex-President LuLa’s ability to run for President. Today the courts ruled he will remain unable to scare investors with the realistic possibility of becoming President and likely be placed in jail for up to 12 years. The Real and their stock market exploded higher in a relief rally. Polls show Lula would win if a free man, which may speak to the problems in this country, known for massive corruption and tainted public expectations. The sharper spread between Sugar and the Real hints that in the short term this spread should narrow if history is a guide. Either the Real will begin a renewed downtrend or Sugar will pop higher and create and important low in its rear view mirror. With the investment dollars returning to emerging market economies and their red hot stock markets, we would favor Sugar bottoming in early 2018 and possibly moving higher now.

The technical picture also indicates a bottom is approaching as Stochastic momentum is close to a short term Bullish crossover. With our inflection date due next week and potential projections to the 12.50’s basis March Sugar, we wouldn’t rule out a further quick climax correction. However, with the Brazilian currency appreciation today, any further follow through in the Real should quickly boost Sugar in a burst of short covering. Short term resistance basis the March Sugar contract is around the 13.50 level.

The short covering potential becomes more clear when analyzing the Commitment of Traders (COT) report. Large Spec Hedge Funds and Managed Money funds have been testing all time record Net Short extreme Bearish positions several times since last June whenever Sugar prices have tested the 13 cent level. The time to look for upside price potential is when spec money has exhausted itself on the Sell side. With Sugar Managed Money funds spending most of their history net long, it would normally require a 1.5 to 2 cent rally from here towards 15.00 cents to regain a balanced Long/Short posture once again.  The 15.5 to 16 cent level is major resistance above which hedge funds would escalate their short covering buying frenzy. For now we need a couple closes above 13.5 to solidify a stronger base and a further rally as the Real appreciates in 2018. 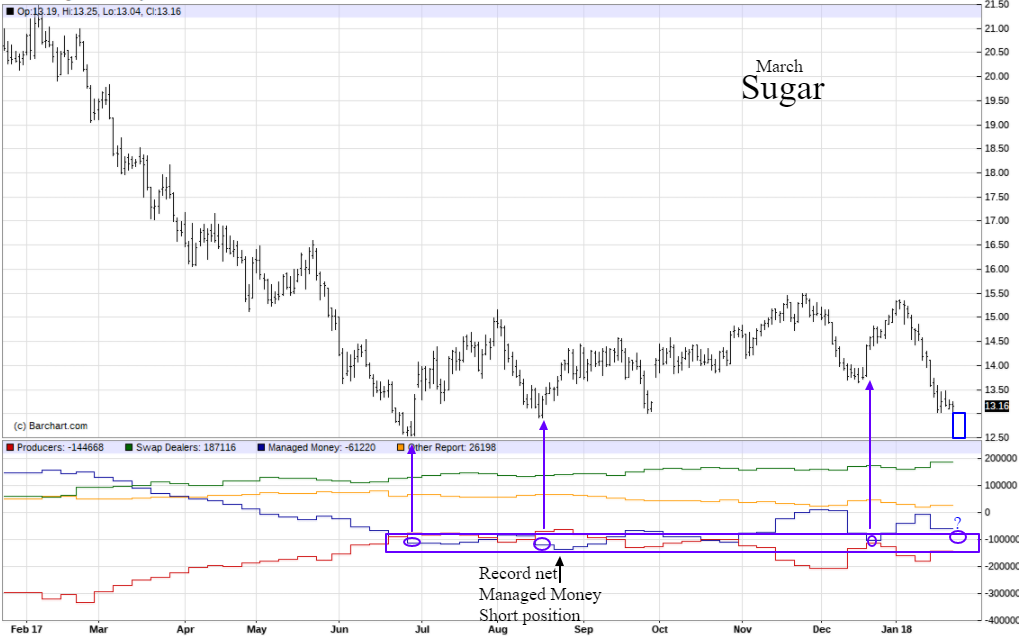