When the global pandemic was just beginning to spread outside of China in early February, most expected multiple Federal Funds Rate cuts. However, nobody expected interest rates to yield so quickly to fear from the COVID-19 virus. Despite a massive 150 basis point cut in Fed Funds from 1.5% to zero in just 11 days, along with massive fiscal stimulus, stock and bond markets continue to panic. The last time the Fed Funds interbank borrowing rates were pushed to 0% was late in the Great Recession of 2008 – 2009. Back then our economy (GDP) was contracting at a 4% rate. This biologically infected GDP is currently witnessing far less economic activity than 2008 as of March as mandated by Government. With no clarity on the demise of this pandemic, it’s understandable that investors will continue to discount increasingly dire scenarios until COVID-19’s spread begins to wane.

When the vaunted German economy began selling 10 Year Bonds with negative yields in April 2019, the faster growing US economy still had its 10 Year Bonds with a robust 2.5% yield. The US could brag then that the sickness of negative yields – paying investors to borrow money – would never happen, that is until the COVID-19 pandemic deflated our economic balloon and sent the 10 Year to just a third of one percent yield. The US has been the cleanest of the dirty shirts by avoiding negative yielding bonds, but that may soon change as the Fed is forced to  buy bonds to provide liquidity and avoid a banking panic. Major companies are now maxing out their credit lines and terminating share buybacks for raising cash to battle the Coronavirus shutdown. This era of low yields is good for servicing debt loads, but hardly a panacea in sustaining marginal businesses. Many workers living from paycheck to paycheck employed in small companies or as independent contractors will see little to no benefit from cheap credit, avoiding payroll taxes or extended sick leaves funded by the Government. A small silver lining is the eventual flood of mortgage refinancings once the dust settles from the COVID-19 Bomb that is cratering the economy. The 15 Year Mortgage rate has fallen under 3%, but could drop close to the 2% range in the weeks ahead.

As bad as the Global Purchasing Mangers Index  (PMI) appears in this chart, falling well below contraction mode under 50, it’s likely to become much worse. Manufacturing PMI measures the outlook of supply chain managers across many sectors, and many major countries still have PMI’s and other GDP data that has yet to reflect any of the sudden Virus impact upon their businesses and outlook. Currently the markets assume the worst will be over in the 2nd quarter, but increasingly the markets are assuming there is considerable room for more bad news ahead. 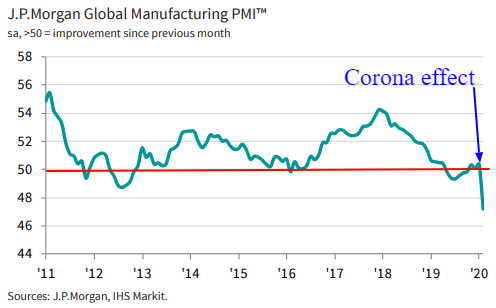 Major stock indices have fallen 30% from their intraday record highs reached February 20th – just 3 weeks ago. Sentiment measures have moved from extreme overbought optimism to extreme oversold levels of pessimism. This is still not the time to Buy the Dip! For those who raised some significant cash reserves when indicated, it may be tempting to buy, but in this biologic market panic, valuations are not yet relevant. The only measure pertinent to this virus plagued investment market is a biologic metric indicating that COVID-19 is reaching a contagion plateau. Currently, this virus spread outside of China is still in the early to middle innings as we await more alarming outbreaks in the US and Europe. When the Pandemic of Fear from the Coronavirus is maximized and early outbreak countries like S.Korea and Italy are on the mend, then markets will be begin to anticipate a V shaped recovery and major stock market rebound.