Global economic fears and the proliferation of stock Bear markets have grown in recent months. The Bank of Japan (BOJ) has joined the negative interest rate club to combat a deflationary debt implosion as the deliberation of the year has become clear: Are we experiencing an isolated energy driven recession or systemic risk of a global recession and a bursting debt bubble with reflections of 2008?

Are Shipping Rates the Canary in the Coal Mine?

Or maybe the coal mine is the canary in shipping rates! The Baltic Dry Index quotes the shipping rates of various sized vessels carrying primarily raw commodities. Chinese economic growth rates are slowing, iron ore imports have topped and coal around the world is being replaced. Significant reversals in the shipment of commodities have depressed this shipping index that is often used as a barometer of global vitality. While this Shipping chart below supports the case for a sluggish commodities sector, it fails to capture the growing service economy and exaggerates the negative picture of international trade.

Since 2009 China has been a major engine of global growth and buyer of US debt. Imports into China of raw materials and food supplies rose almost uninterrupted for well over a decade with only a hiccup during the 2008 Great Recession. China’s industrial production growth rates have fallen back close to their nadir in 2009 and help explain the 30% drop in coal imports last year, 40% fall over 2 years and likely further contractions in 2016. With slowing demand, stockpiles of excess supply and an environmental shift to cleaner energy to tackle an enormous pollution crisis, there is no reason to expect a change in trends for raw material imports or the cheap Baltic Dry Index shipping rates.

China has experienced several years of industrial contraction according to its PMI (Purchasing Managers Index) that in part has depressed the Baltic Shipping Rates and is highly correlated with Chinese imports. More disturbing than the 4 and half year slump in Chinese manufacturing is the recent contraction in their combined service + manufacturing orders to reach the worst “growth” rates since 2008.

Despite half the economy tied to the goods producing sector, the energy and material sector slowing has not infected the overall economy to trigger a recession – yet. Services are a larger portion of the developed world economy than manufacturing and as seen below Global Services continue an uninterrupted expansion. A Global PMI under 50 (signalling contraction) would be a significant concern in a deflationary world of extreme Debt to GDP ratios. China’s Debt/GDP ratio is going ballistic with the largest contributor corrupt state owned non-financial enterprises who added $1.2 Trillion in corporate debt in just 2015 pushing the total Debt/GDP number close to 300%. With Japan close to 240% Debt/GDP we have 2 juggernauts that will cause massive global damage when the inevitable deleveraging finally contracts liquidity.

North American shipping volumes have been consistently weaker than pre-2008, but volumes have been steady, above the important 1.00 level. The current downtrend merits watching, but no alarm bells here until 1.00 is broken.

Our US Fed acted like a cat in a room full of rocking chairs for years, wanting to raise interest rates and take back its massive reserve build up, but feared it would trigger a panic unless the economy achieved self-sustaining growth rates first. While avoiding the question of “Should they have allowed the global system to fully deleverage in 2008”, we now see that their whimsical effort to start raising interest rates last December was premature. The strength in employment and personal consumption are supporting still several more rate hikes in 2016 during an acute period of rising financial fears. A weak Q4 2015 GDP of just 0.7% growth is now estimated to evolve into a Q1 2016 rate of well over 2%. Along with official unemployment down to just 4.9% there is ample reason to expect more rate hikes soon which will be a headwind for nervous financial markets. Real U6 Unemployment of 9.9% has not gone unnoticed by the Fed and any surprise weakness in the GDP will derail future rate hikes.

Bank credit tightening is clearly one sign to monitor for a new 2008 style contraction. Due primarily to the energy sector loan loss exposure, banks have now tightened to levels last seen in 2009. With defaults rising, banks have selectively withdrawn liquidity, but have not raised lending requirements to worrisome levels overall, which are still favorable.  Keep an eye out for the 20 to 40% of banks reaching the scared credit category. 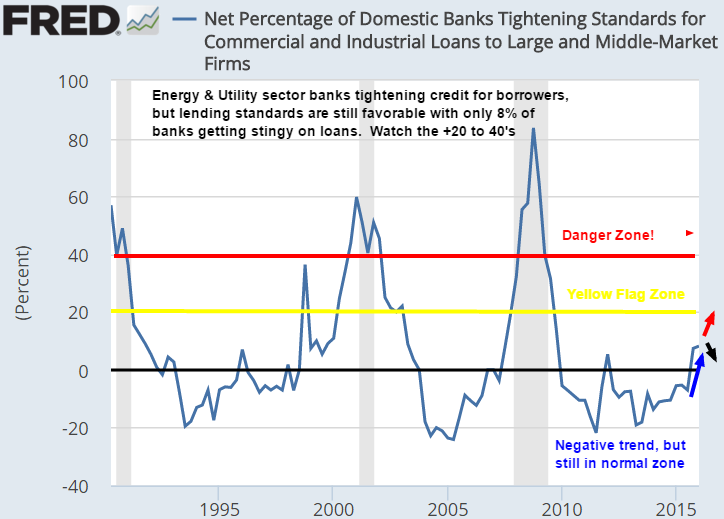 Echoes of “The Big Short” were felt recently as bank stocks around the world and particularity in Europe were being sold heavily. The last time Deutsche Bank had CDS fears rise to this level was during the onset of a renewed European recession. The Italian banking index has fallen about 30% and esteemed mega banks lost similar amounts of value as fears of margin pressure from falling interest rates and a slowing economy sent tremors through investor portfolios. The European Central Bank (ECB) just today told the markets not to expect some major infusion of new stimulus despite the growing sense of urgency.

Since the sub-prime “Big Short” of 2008 the CDS canary in the coal mine has not been heard from other than a few coughs in 2011/2012. In recent weeks the global commodity deflation and energy recession has sent renewed shock waves though credit markets. Banks have been hurt, China has lost well over a Trillion in 2015 in private and Government capital defending its currency and CDS spreads have once again moved higher. Less of a surprise are the inept Governments in Brazil, Greece and Venezuela that are mired in deep recessions and experiencing CDS spikes. While those undeveloped and emerging markets are a concern, the lower CDS spikes in Portugal, Ireland and Italy are of greater interest. Even Germany has seen a pop in its CDS. These trends warrant watching, but current levels don’t imply severe risk yet, but changes can occur quickly. With nearly $5.5 Trillion (23% of global marketplace) in bonds held at negative interest rates we can feel the desperation amidst the calm rhetoric by global leaders. Will spreading levels of debt priced with negative yields reach levels that actually impair the lending ability of the very banks the Governments are using to stimulate? Will declining rates lead to a threshold where currency devaluations lead to trade barriers as in the 1930’s? The trends continue to move in this direction, but the tipping points for recession and panic have been avoided thus far and still warrant looking for oversold conditions for bond and equity investing.

A rising rate of monetary growth is a sign that central banks are injecting reserves to combat financial credit concerns, while falling rates are more typical during the complacency of a perceived expansion. The US Federal Reserve added $3.5 Trillion in new reserves to the banking system from 2008 to 2014 in an effort to calm borrowers and lenders and stimulate accelerated growth rates. The Fed’s final goal was to engender a self-sustaining US economy devoid of stimulus. Should the US economy slow further in 2016 then the Fed will need to increase the Money Supply or risk slowing the economy to stall speed.

While the US Central Bank ceased its QE Bond buying binge at “just” $3.5 Trillion in late 2014, the ECB has stepped on the gas for the past 12 months with more to come. Their M1 has rebounded in kind with double digit rates of growth. Unfortunately with negative bond yields, deteriorating energy related junk bonds and a slowing China it appears as if the worlds central banks are pushing on a string as stock markets of developed countries from Japan to the US are 15 to 30% beneath their 2015 peaks.

The Ted Spread  (Libor – T-Bill) is quiet, yield curves are very positive and credit swaps are below previous levels that warn of either global or isolated sovereign debt risk. However, warning signs are growing and merit our attention in the months ahead.  The earthquake epicenter will be in China with Japan a smaller 2nd place candidate. If China continues the current rate of injections to defend the Yuan and paper over bad debts there will be a point, like the sub-prime of 2008, that they will be forced to devalue the currency, close zombie factories and add massive stimulus to the local banks in a painful reset. Our post 2008 crash outlook generally expected an 8 to 10 year expansion phase followed by a potentially devastating 1 to 4 year “Greater Recession”. There are no crystal balls, but so far the general cycle outlook isn’t surprising, even if the behavior and outcome are uncertain in this epic battle between monetary inflation and demographic debt infused deflation.

Sentiment levels in late January and mid February have twice touched levels indicative of a significant medium term trading bottoms for US stock indices. Sustainable rallies may be difficult, but we continue to expect a final low in stocks and oil between now and early March that will at least allow a rally phase into the Spring. Talk of sub $20 Oil and -20% stock market corrections look less likely short to medium term.