Boeing a Bargain at Lower Altitudes

Our Favorite Stock list has been consistently populated with growth and momentum stocks such as PayPal, Visa, Splunk, Coupa and Twilio. With some frothy values among this fast growing digital sector and a possible inflection point arriving with good or bad news out of the China and US trade progress this quarter, we are reviewing some undervalued companies held back by special factors that should be temporary.

Boeing: The majority of Boeing investors know this company owns almost half the commercial airline market and they are confident the grounding of the prized 737 Max fleet will be temporary. So this is mostly a timing event. The main questions are, how long will it take to get the Max back online and what will be the cash flow burn? There will be pressure to return this plane back to service given the disruption to the travel industry, but it will take a 10 country aviation panel until at least the end of July to conduct a comprehensive review and certification process according to the current action plan. Certainty of timing is impossible, but an August approval is mostly priced into the stock near 360 a share. If prices can hold 360 into July, then the odds jump that an upside breakout is near. Any new air-pockets adding uncertainty to this schedule could send the stock to a more ideal landing zone in the 320’s or just under 300 where heavier stock purchases should begin. A reinstated 737 Max could technically support a price forecast in the mid 500’s at a 25 multiple in 12 to 18 months after the all clear signal is declared. 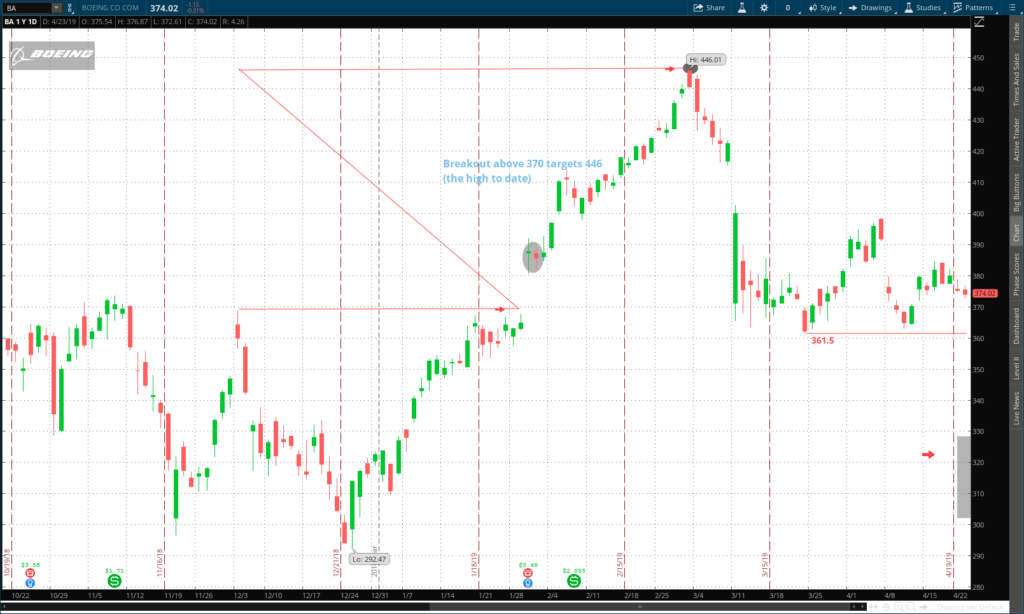 Goldman Sachs (GS): is another stellar performer held back by investigations. New reports that our Justice Department is favoring a guilty plea for GS in its alleged role in the 1MBD Malaysia case helps speed the pricing in of negative expectations for this investment bank. While there is a worst case scenario for a return to the 160’s, should support at 190 fail. A move above 210 would more firmly establish an uptrend in GS to head back to its highs in the mid to upper 200’s. Malaysia seeks $7.5 Billion from Goldman and the US Justice Department may impose a fine of $2 Billion. Once the news arrives that Goldman will settle for something less than the $9.5 Billion, then the stock can begin working higher. Like Boeing, the news resolution event could be several months away creating some air-pocket risk of lower prices should the broad market correct. 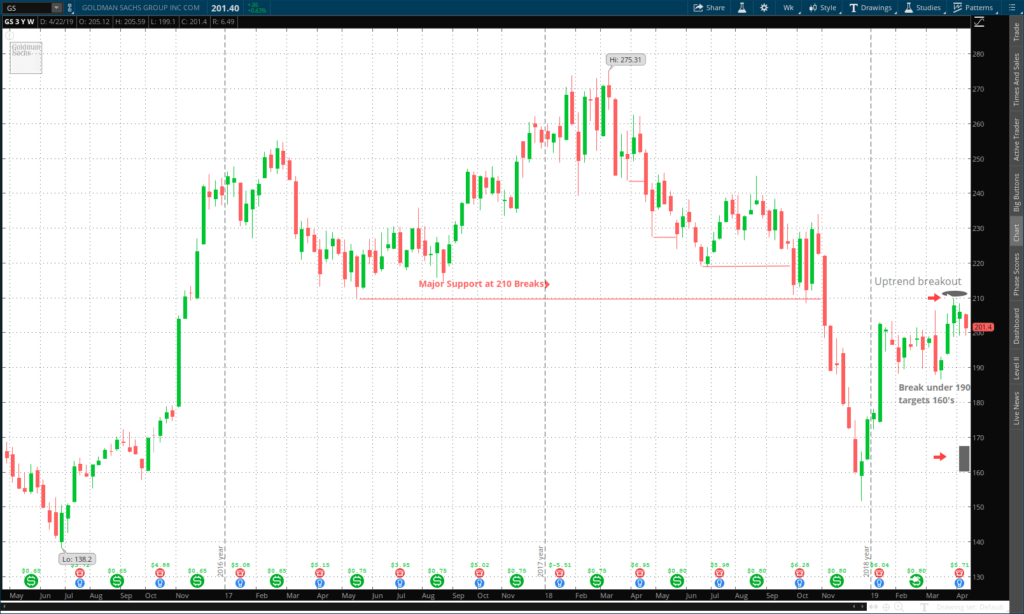 Johnson and Johnson (JNJ) has a myriad of lawsuits stemming from the controversy over possible asbestos contamination in their talc. As each suit settles, the green light will increasingly blink for investors to buy this restrained defensive stock. Technically, it would appear that once prices run above 141, establishing a medium term uptrend, then a test of record highs near 150 is next. The worst case appears to be in the rear view mirror for JNJ and as the year progresses optimism should improve in spurts. If prices fall under 135, then a correction into the 120’s would be expected. 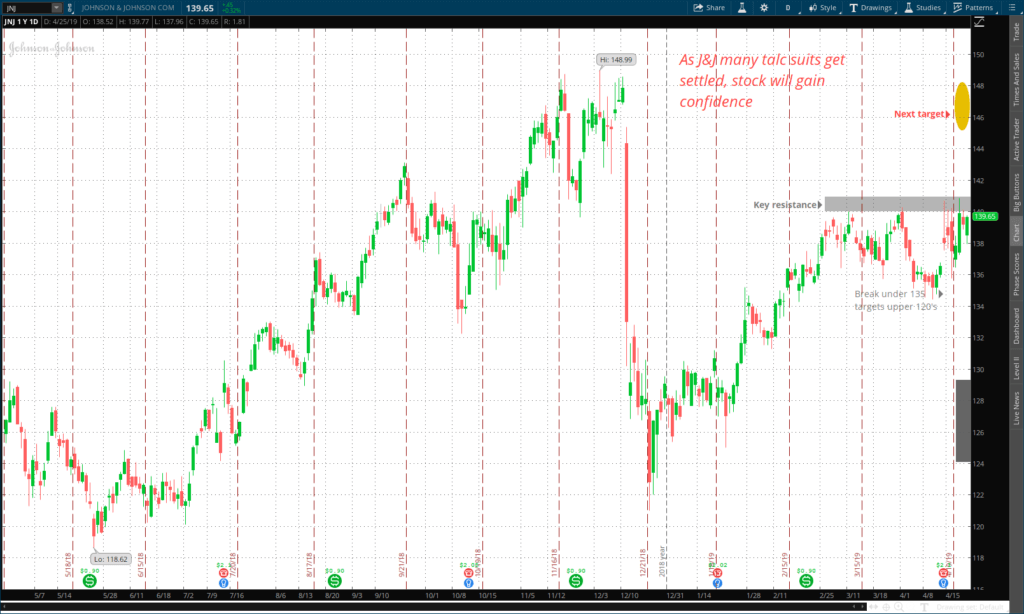 Santander (SAN): This dominant Spanish bank focused on Europe and South America has been severely restrained by macro economic forces in 2018 through today. The Banking sector globally has been weak, but Santander’s geographic exposure has depressed their valuation more than most. We have been expecting a recovery in both of their primary markets with an acceleration phase assuming a US and China trade deal can conclude successfully in the next couple of months. SAN is the largest bank in Europe and Latin America  with 144 Million customers. They have increased profitability and raised $25 Billion in cash for shareholders and balance sheet improvements. With only a 3 percent exposure to the US there is room to grow here and benefit from very depressed Euro and South American trade zones. We expect any new test above 5.2 on SAN to lead to a pop above 5.6 to 6.4 when a global economic rebound takes hold later in 2019. New highs above 7.57 are expected in 2020 should the global economy recover. 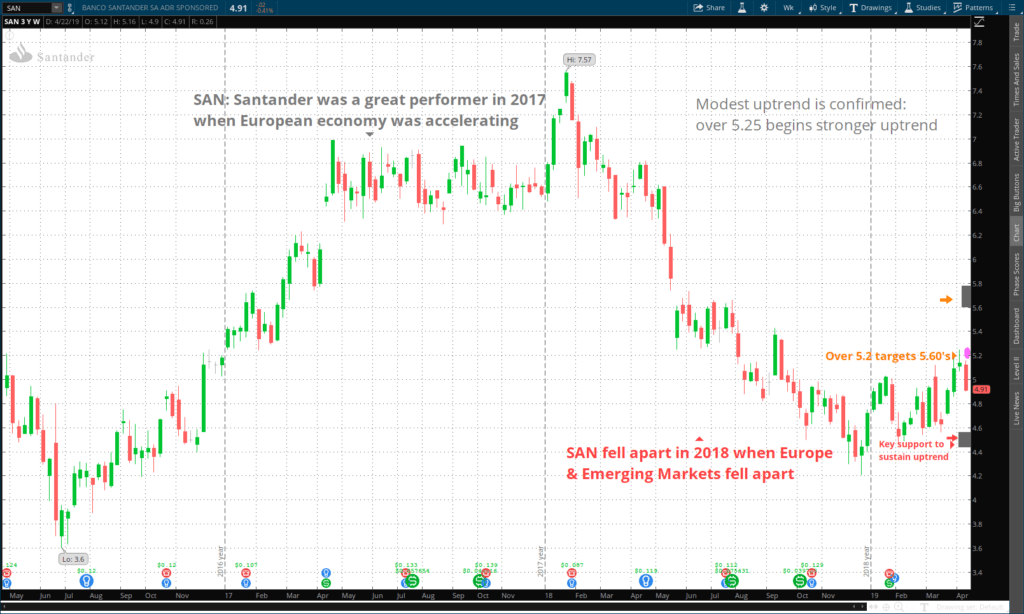 For our final look at potentially undervalued stocks, we have StoneCo (STNE). This small Brazilian company is in the online payments space like PayPal and should be considered a higher risk speculation. One interesting tailwind is that Warren Buffet’s Berkshire owns over 10 percent, worth over $360 Million. What makes STNE undervalued is the 40 percent collapse in equity value this month on word that a large Brazilian bank, Itau Unibanco , was going to compete. The merchant payment sector in Brazil is $767 Million and StoneCo has a modest 6 percent, but is growing its customer and revenue at rapid rates (over 100% in Q4 2018 over Q4 2017). There is room to grow in this space for multiple competitors and the news driven correction may be an overshoot. This is also a play on emerging markets, thus the China trade deal becomes an inflection point to watch for potential global economic acceleration that would benefit Brazil and StoneCo.