An Apple a Day Keeps the Bear Market Away

An Apple a day keeps Bearish investors at bay and the road to riches paved by high tech gold. This revenue gold is being minted by technology behemoths and cloud princes that have proven to be consistent growers in good times and bad. The leadership in this market is narrow during a COVID impaired economy that negatively affects the physical service sector while enhancing virtual segments connected to the stay at home economy. Mega cap tech is positively diverging from the broader indices more than ever, making it easy to pinpoint where Bull market investors are placing their bets: Apple, Amazon and Microsoft to name the three biggest.

For several years the unthinkable $1 Trillion market cap value for a single company had become a horse race that Apple won by a nose over Amazon in 2018. At one point last year, Apple, Amazon and Microsoft were all testing the $1 Trillion market value barrier with a frequent jockeying for the lead. As investors contemplated the distant $2 Trillion milestone this year, it looked like Amazon might win the crown when it more than doubled from its March lows. However, last weeks blowout numbers firmly launched Apple back into the lead when its prices gaped higher and reached the important technical swing target of 443. This level is just 4% below the $2 Trillion milestone. The broader stock market is unlikely to take a serious hit to valuations as long as tech giants like Apple are running to record highs almost weekly. While we see a long runway for rapid growth by the largest company on the planet, Apple has now hit technical targets near term that should slow its ascent. With significant resistance 4 to 12% above current values, it may require a faster pace by the other Trillion $ horses (Microsoft, Amazon and Google) to keep the markets racing higher this year. Longer term, Apple has plenty of market share to usurp with an increasingly powerful magnet of a dominant ecosystem that will compel customers to switch brands since no other company can compete with such a large family of high quality products. There may be products of similar quality as a stand alone, but none can sync a whole family of products that play well together. Apple’s $2 Trillion valuation near 460 and even a $500 stock price are possible “near term”, but the rising tide of Apple may soon slow for the next few months making it difficult to sustain lifting all boats in the stock market.  When Apple’s ready to catch its breath and take a step back to collect its troops, the broader market will be eager to join in the correction. 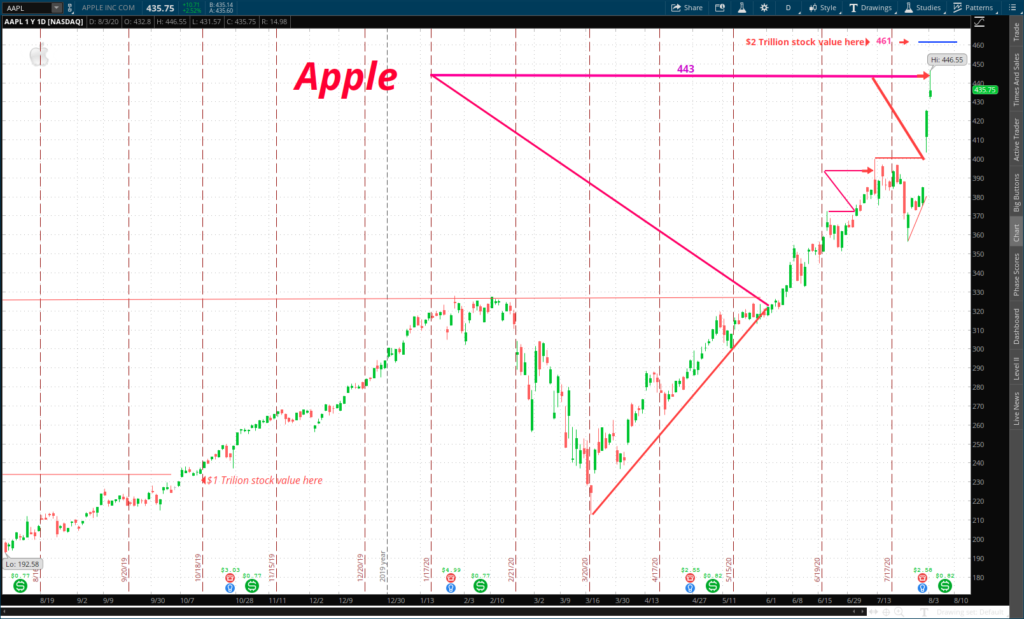 As much as Apple has created a dominant ecosystem brand that increasingly stands alone, Amazon is also carving out a dominant space in delivery, tech product manufacturing and a little thing called Amazon Web Services (AWS) with annualized sales of $40 Billion and growing over 30% a year. Amazon’s amazing double in stock value over just 3 months from late March has only stalled recently to catch its breath, but may be ready this year to join Apple in knocking on the door of the $2 Trillion club (currently $1.55 Trillion). Like Apple, it’s very hard for the market to fall while Amazon is rocketing higher. Although prices have paused this past month, Amazon sales were impressive during the heart of the pandemic as well as the early innings of our economy opening back up. COVID has accelerated the secular trends toward online and delivery that should keep this juggernaut moving to new highs longer term. 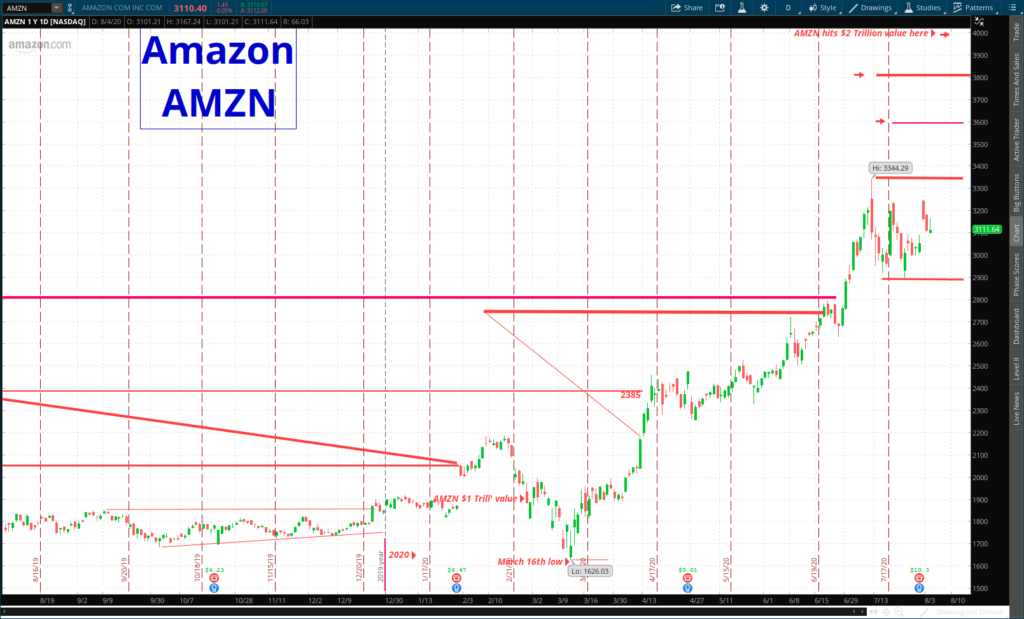 Mr Softy (Microsoft) is a third horse in the race for $2 Trillion that has quietly edged slightly ahead of Amazon and is currently testing new record highs again this week. Other FANG stocks like Google, Facebook and Netflix are much further back in the pack currently, but as long as these stocks are positively diverging from the SP 500 Index, it’s unlikely the broader market is ready to capitulate.

While the prospects are high for dozens of tech companies to continue leading broader markets higher, we also recognize the need for caution due to the extreme future values priced into today’s number. The positive tech stock leadership has been the guiding star to follow in this hard charging Bull market, however breadth among the tech sector darlings is a near term concern. It’s not uncommon for a stock index General to keep hitting new highs for 1 to 3 months while fewer and fewer stock soldiers are able to keep pace. The narrowing of leadership today shares a lot of traits to the V shaped recovery of stocks in early 2019. As illustrated here, the 2019 surge rose without pause for over 4 months before requiring a significant correction. It was after a bit over 2 and a half months of declining breadth numbers that the broader market finally stumbled. The top 100 Nasdaq stocks hitting new 50 day moving average highs has been falling since early June while the index continued to record highs. No two markets are identical, but the extreme negative breadth divergence this week hints of a climax in August that may witness a top in stocks necessitating a one month pullback that is larger than any corrections since last March. An August melt up may be the storm before the calm. 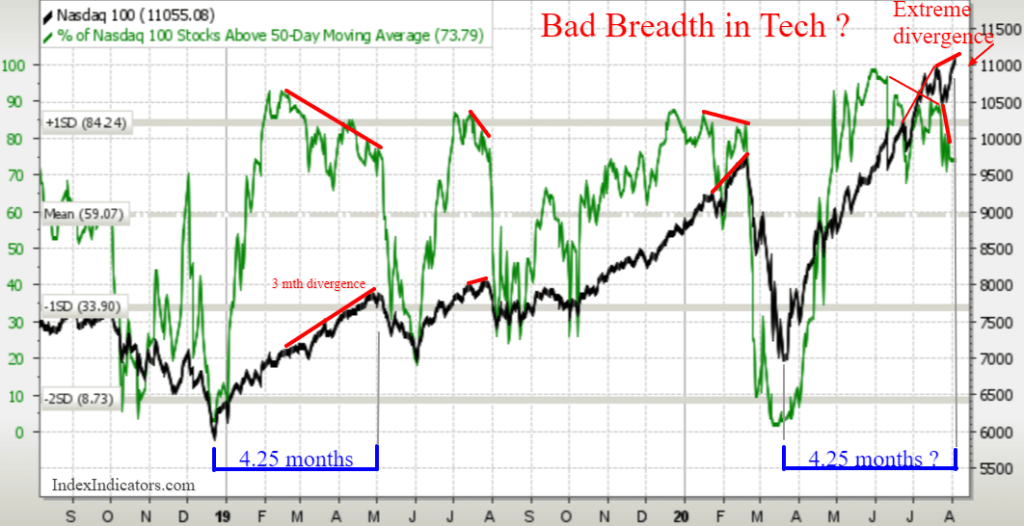