Oil is shooting higher in recent weeks due to inventory draws and threats to Iranian production. In 2016 Trump campaigned against the historic Iranian Nuclear Agreement, but extended approval today, vowing to end the Deal in May unless Europe agrees to tougher terms for Iranian compliance. With Iran producing almost 4 Million barrels a day courtesy of this Nuclear Agreement, there is a considerable supply risk hanging over the market as the May “line in the sand” approaches.

The Oil Bear market ended in early 2016 at $26/barrel and continues higher into the mid-$60’s thanks to the new Global recovery, OPEC supply cuts and Iranian conflict. With Oil trading at $50 on 9-21-2017 our report entitled “Trump’s October Surprise Supports Oil”  (https://execspec.net/oil-sanction-iran/) Exec Spec stated: “we normally see a seasonal oil price drop into the December-February time frame, but with sharper than normal inventory cuts and Trump’s potential tightening the noose around Iran, investors shouldn’t be too complacent waiting for that one final test of $40 before prices head to $60+ … buy the Q4 2017 – Q1 2018 dips.”  Oil is now almost $65.

World demand outstripped supply in 2017 for the first time in years. This supply deficit has been boosted primarily by short sighted OPEC production cuts. The most recent $9 run higher in Oil since December is due to internal Iranian unrest and more importantly Trump’s real threat of major trade (Oil) sanctions and the possibility of a military strike. As we mentioned a year ago, we expect Trump to ratchet up pressure on Iran until there is an abrogation of the Iran Nuclear deal and this will lead to higher Oil Prices. Without Iranian turmoil the supply and demand trends favor Oil back to the mid-$50’s to lower 60’s. However, US enforced sanctions or a military confrontation allow for prices to move above $70 by April before a more important peak arrives.

With World Brent Crude Oil moving from parity with US Oil one year ago to an excessive $6 premium today, there is great incentive for US producers to take advantage of Trump’s energy export push.

Look for US Oil exports to keep rising as seasonal demand picks up in the 2nd quarter and the Brent premium to US Oil continues. The US will be touting its growing energy independence in 2018 with not only the highest Oil exports ever, but for the first time since 1957 the US is a net exporter of Natural gas, which will continue to grow rapidly in 2018 and 2019.

There were only 4 months in 1970 where US Crude Oil production slightly exceeded the current 9.8 Million Barrel a Day pace and those all time records are certain to fall in 2018. With OPEC literally handing over Oil profits to the US and Canada, it’s clear the US will remain the world swing producer reaching 10.8 to 11 mbd by late 2018. It’s likely OPEC (mainly Saudi Arabia and Russia) will remove self imposed production cuts by the end of 2018, or sooner if the US curtails Iranian production. 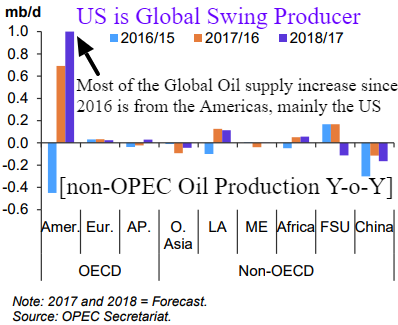 Even our Bullish outlook didn’t forecast such a sharp drop in US Oil inventories. Seasonal stockpiles appear set to rise only back to the 440 – 460 million barrel level in the 2nd quarter 2018, which sets the stage for continued price support in the $50’s. The colder than normal winter, increasing exports and rebuilding of depleted gasoline and distillate inventories through January are adding more temporary pressure to Oil supplies and higher prices. 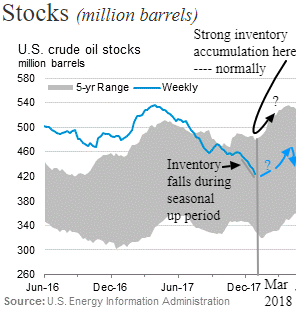 With Trump’s 90 day approval of the Iran Nuclear agreement today, it appears that some of the upward pricing pressure will fade temporarily. Money Managers are holding their largest Net Long positions ever, thus Oil prices are vulnerable to sharp long liquidation price breaks on any news such as inventory accumulation, warm weather or less tension in the Middle East. While faster global economic growth and Trump’s veiled threat towards Iranian Oil production should keep a firm floor under Oil prices in the $50’s, the risk of at least a modest correction should rise quickly over the next few weeks. The overbought condition from Hedge Funds and a modest rise in inventories in Q2 through Q4 2018 will lead to a larger 10 to 15 dollar corrections in  Oil at some point, but only after Trump’s confrontation with Iran is discounted by the marketplace. 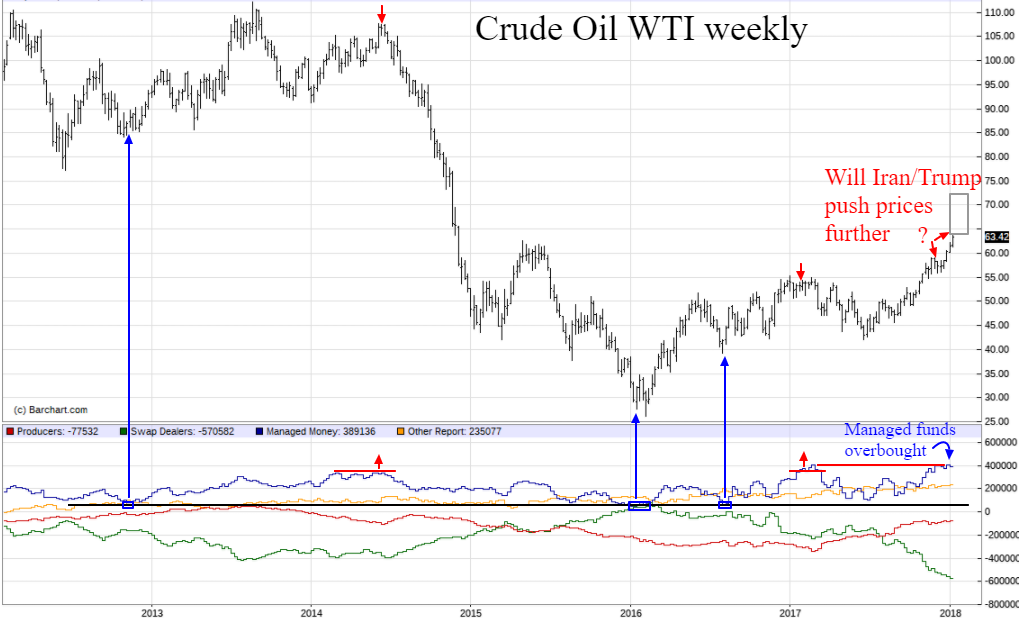 Our Bullish September 2017 outlook to Buy the dips in Q4 2017 and Q1 2018 remains in place until at least May. Until then, selling the rallies entails greater price risk than buying the $3+ dips. Once the outcome of potential US sanctions or military action becomes clear, then Oil should work lower into a $15 trading range. The Energy sector stock ETF – XLE since December 15th has risen a very strong 13% while the SP 500 Index benchmark has rallied 4%. The XLE should continue to perform well into April.